The Democratic primary is at the midway point with half the states having voted and half the pledged delegates awarded. Contests today in Arizona, Idaho and Utah mark the first of few remaining chances Bernie Sanders has to derail Hillary Clinton's path to the nomination.

"Starting today, the map now shifts dramatically in our favor," Sanders told supporters in an email last week after Clinton trounced him in all five contests on March 15th and expanded her pledged delegate lead to 321. He wrote that he has "an extremely good chance to win nearly every state that votes in the next month."

He's absolutely right. Twenty-eight contests remain and nearly half are in states with open or semi-closed primaries or caucuses that favor him. He also is well positioned to win several or most of the eight states that vote between now and April 19 when New Yorkers vote in a closed primary.

We're likely to hear a lot in the coming weeks about "Bernie Momentum" but here's the startling political reality: Sanders can win every single one of the remaining contests and still lose the nomination.

Of the 2,031 pledged delegates awarded to date, Clinton won 58 percent and Sanders 42 percent -- a respectable share for a candidate with almost no establishment support who is running to lead a party he's never been a registered member of. Going forward, all plausible lanes for him appear to fall short of a win. 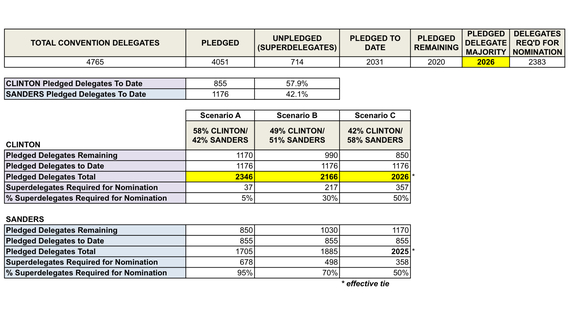 In one scenario, their popular vote averages in the second half of the race mirror those in the first and Clinton goes to the convention in July just a handful of delegates short of winning the nomination outright. In another, Sanders significantly outperforms his 42 percent average and wins a narrow 51 percent majority in every remaining contest, splitting pledged delegates nearly evenly, but Clinton still secures a majority of them to enter the convention with a mandate.

And in a third scenario, Sanders reverses the poles entirely and wins by an average of 58 percent across all remaining contests, pulling to no greater than a pledged delegate tie with Clinton. Her 18:1 margin of support with Superdelegates would almost certainly break that tie. Even a map shifted so dramatically in his favor that he sweeps it in a coast-to-coast Bernie Blowout won't hand him the nomination without outsized wins in New York, where he trails Clinton by almost 50 points, and California, where demographics render such a feat unlikely.

These mathematical realities may be why the Sanders campaign told reporters he plans to court uncommitted Superdelegates and those who softly support Clinton. Campaign strategist Tad Devine also flirted with the idea of pressuring pledged delegates to switch their representation on the convention floor to him. But if Clinton nets a majority of pledged delegates, this strategy wouldn't just be an impractical fantasy; such a gambit would be uncharacteristically hypocritical of an otherwise honorable campaign whose allies recently pressured Superdelegates not to "thwart the will of the people."

None of this is to say that Sanders should drop out of the race. Hardly. His candidacy has galvanized an admirable measure of disinterested and disaffected voters across the nation. They deserve a chance to vote for him. He has elevated the issues of income and wealth inequality, Wall Street reform and campaign finance reform to the level of substantive national discussion. And he pushed Clinton to assert a decidedly more progressive tone than she would have in his absence.

Sanders has the money and support to run until June and it's his right and privilege to do so. I hope he does. His candidacy is good for the democratic process, good for the Democratic Party, and ultimately good for Clinton.

But the time is nearing for him to seek a unifying endgame in which he pivots his rhetoric away from criticism of Clinton towards a defense of the signature issues he wants incorporated into the party platform. He can influence that platform without damaging the eventual nominee in the general election. And because I view him to be a principled man of integrity, I expect that he will.