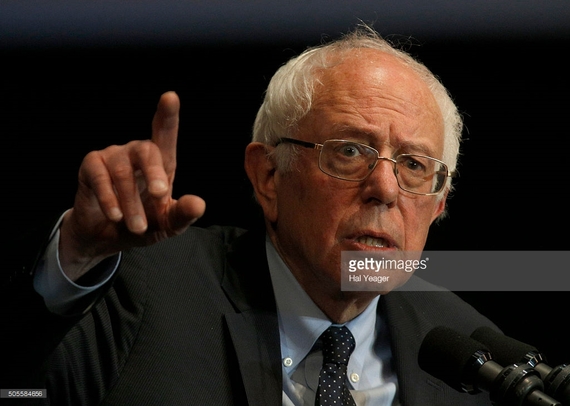 The dichotomy between the politics and personality of Bernie Sanders and the other candidates in the Presidential race is by now painfully obvious. For those still purblind from party loyalty or a pathological aversion to the word "socialism" a hard look at what each candidate stands for would be highly recommended. It would be especially pertinent to examine their words and actions for concern and compassion for the average American.
Let's start with the Republicans.
After witnessing the traveling troupe of mountebanks known as the Republican Presidential debate a few things are clear. Firstly (other than innocent bystander John Kasich) the candidates woefully lack civility and seem to take pride in their contemptible routine of playing to the lowest common denominator. Despite worldwide ridicule Messrs. Trump, Cruz and Rubio seem intent on encore after encore of their machismo and over-sized histrionics. Beyond the farce of the debates, each of these candidates has very similar stances on most issues. All three are fixated on "securing" the border with Mexico; Rubio wants an additional 20,000 border patrol agents while Trump and Cruz (oh yes, Cruz has his own vision which Trump actually borrowed from him) want to build the great wall of Mexico. Trump suggests "Special" IDs, banning Muslim immigration and shutting down Mosques. Rubio wants to shut down not only mosques but any place where Muslims congregate. Cruz downplays anti-Muslim hate crimes and opines that America should accept only Christian refugees from Syria, not Muslim ones.
Coming to healthcare and the welfare system, both Rubio and Cruz want to increase the age for collecting social security and downsize medicare. They do not want to increase minimum wage. It is thus far impossible to tell what Donald Trump's economic plan is other than a copy and paste assortment of scrapping trade deals, raising tariffs on China and Mexico and somehow preventing corporations from shipping jobs overseas.
Coming to Hillary Clinton, her recent efforts to present herself further to the left on taxes, war, gay marriage and Wall Street reform are betrayed by her past statements and actions as first lady and Foreign Secretary. Amongst current candidates she is second only to Jeb Bush (who dropped out last month) with over a hundred million dollars from corporate donors. She has received almost three million dollars just from speeches given to corporate audiences, especially the banking industry. The Washington Post described the Bill and Hillary Clinton record of cultivating donors a virtual "blueprint" for other politicians and their corporate financiers. On gay marriage she repeatedly and unequivocally opposed it making a U-Turn only after Barack Obama made it clear what the Administration's stance was.
A recent New York Times investigative article described how Hillary Clinton built the case for bombing Libya and was crucial in both coordinating with rebel leaders and persuading President Obama intervention was necessary. Libya was far from being a failed state. Following the NATO bombings to remove Gaddafi it rapidly transformed into one and has become a major center for Al-Qaeda and other extremist groups whom Gaddafi, for all his vices, had not allowed a foothold in Libya. In an interview a few days after Gaddafi's death Clinton-with fists pumping-cheerfully declared: "We came, we saw, he died". This, along with her record of having voted for the invasion of Iraq in 2003 make it impossible to see her as anything but a hawk when it comes to war and interventionism.
There is not an ounce of compassion to be found here. These are career politicians, self-aggrandizing individuals who will say anything to get votes but whose rhetoric and actions nonetheless betray their insincerity and apathy.
In contrast to all of this, Bernie Sanders' message and passion remain unchanged since he started his political career as mayor of Burlington, VT in 1981. He still wants to weed corruption out of Washington. He still wants to take the influence of big money out of matters of national interest through campaign finance reform. He still wants a fair and equitable tax system where the rich pay their fair share. He supported gay rights in 1981 and continues to do so. He was arrested as a 21 year old while participating in a civil rights protest and continues to be the politician most vocal on racial justice, police brutality and Islamophobia.
The choice, America, is as clear as it gets. We are firmly in the middle of an era of corrupt politicians completely disengaged from the lot of the common man and beholden to their super-rich patrons. We are already in the midst of a status quo pushing us towards greed, selfishness and apathy towards the less fortunate. Don't stay home when the primary arrives at your state, get out and vote.
And feel the Bern.