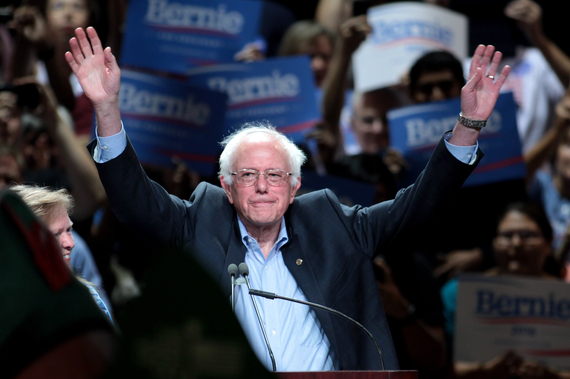 Last night on CNN, while discussing Bernie Sanders' landslide victory over Hillary Clinton in West Virginia -- which followed a 5-point Sanders win in Indiana last week -- Michael Smerconish said that "Democratic super-delegates might have to rethink" their support of Hillary Clinton given how dramatically better Sanders fares in head-to-head match-ups against Donald Trump.

After Clinton's Indiana loss, John King had told CNN viewers that "if Sanders were to win nine out of ten of the remaining contests, there's no doubt that some of the super-delegates would panic. There's no doubt some of them would switch to Sanders. What he has to do is win the bulk of the remaining contests. Would that send jitters, if not panic, through the Democratic Party? Yes. Yes it would."

So what gives? Isn't this thing over?

Almost, but not quite.

What Smerconish (and Wolf Blitzer) were discussing last night, and John King was discussing last week, is a very simple theory -- call it "run-the-table" -- which is easy enough to understand if you simply know the history of Democratic super-delegates and what's happened in the 2016 Democratic primary since Super Tuesday.

So here it is -- both a brief history of the "super-delegate" and an explanation of the "run-the-table" scenario that increasingly is making it into the mainstream media.

For 32 years, the Democrats' decision to create super-delegates looked pretty smart. Other than the current primary season -- a single-digit race (54 percent to 45 percent) that's the second-closest Democratic primary of the last 32 years -- only one of the Democrats' primaries, the one in 2008, was ultimately close enough for super-delegates to matter. In that case the losing candidate, Hillary Clinton, decided to concede after the final votes were cast in June. Clinton's concession made the super-delegate question a moot one.

Clinton conceded in 2008 for a number of reasons: her opponent, now-President Obama, agreed to retire her massive campaign debt; she believed (correctly) that Obama would name her either Vice President or Secretary of State, the latter the second-most powerful position in Washington; and finally and most importantly, Obama had kicked the hell out of her in the latter half of the election season, winning 16 of the final 25 states. In other words, there was no reasonable argument for Clinton to make to super-delegates that they should step in to change the primary result.

While Clinton permitted a roll call vote in Denver -- with more than 1,000 convention delegates officially casting their first-ballot vote for her rather than then-Senator Obama -- she thereafter called for Obama to become the nominee by acclamation. Having made a public statement regarding her own base of support within the Democratic Party -- it's highly unusual, indeed almost unheard of, for a roll call vote to occur when one of the two candidates has conceded -- Clinton receded into the background. By which I mean that she became, within just a few months, arguably the second most-powerful person in America: the Secretary of State.

But Clinton had seriously considered staying in the race past June 7th of 2008. The reason she almost did -- she was barely talked out of it by her aides -- is the very reason Bernie Sanders could still win the Democratic nomination in 2016.

Super-delegates exist for only one purpose: to overturn, if necessary, the popular-vote and delegate-count results.

Super-delegates would be meaningless if their only purpose were to validate the primary and caucus results, which is why that consideration had absolutely nothing to do with their creation. When super-delegates were created in 1984, it was in fact to avoid a repeat of what had almost happened in 1980: a candidate with no shot at winning the general election almost becoming the popular-vote and pledged-delegate winner. It may seem counter-intuitive to some now, but the Democratic Party in 1984 wanted a mechanism available to vote down the Party's prospective nominee -- the popular-vote and pledged-delegate winner -- if that person couldn't be elected in the November general election. So when Howard Dean, former presidential candidate and Democratic National Committee Chair, said several months ago that he would cast his super-delegate vote without regard for the popular vote or pledged-delegate race, he was only stating what has been true about super-delegates for 32 years now: their role in the process is only "activated" either (a) to validate a historically weak front-runner who isn't able to clinch the nomination via pledged delegates alone (in which case the super-delegates are "active," and yet things would be no different if they didn't exist), or, more profoundly, (b) to preclude the nomination of someone who can't win the general election.

John King of CNN, and others, have made crystal-clear the scenario under which Bernie Sanders could become the Democratic nominee for President: he runs the table on the remaining primaries and caucuses.

If Sanders runs the table in 2016, it will mean the following has (by June 7th) happened:

The above alone -- while absolutely stunning; Sanders running significantly better than Obama for the entire second half of the primary season is a major eye-opener -- wouldn't be enough to trigger the second scenario in which super-delegates are suddenly meaningful (as noted above, a front-runner so weak he or she is unlikely to win the general election). What makes 2016 very different from 2008 is that the following items are presently true:

As we sit here today, the Clinton-Trump match-up in the three biggest battleground states -- Ohio, Florida, and Pennsylvania, the loss of all three of which would lose the Democrats the general election -- is a dead heat.

This is one reason why so many Sanders supporters honestly and fervently believe a Hillary Clinton candidacy means a Donald Trump presidency.

The idea that Clinton is in a dead heat with Trump in the three most important battleground states at a time when Trump is the most unpopular major-party candidate in American history is horrifying to Democrats. How horrifying it is cannot be overstated; along with recent polling showing Clinton tied nationally with Trump, and the fact that Hillary's unfavorables are already rising while Trump's are already falling, and the fact that the Republican Party is uniting dramatically behind Trump precisely because Clinton looks to be the likely Democratic nominee, the fact that Hillary is already struggling in Ohio, Florida, and Pennsylvania against an absolute buffoon of an opponent is causing Democrats to worry that she actually can't win.

And they may well be right.

Certainly, much of the available data says they are.

Now imagine that all of the above is true, and Hillary Clinton has just lost the State of California to Bernie Sanders.

In that scenario, Sanders and his supporters believe that the super-delegates -- placed in a situation which, to be clear, they have never encountered before -- would switch en masse to vote for Sanders in late July.

Anyone reading the above who thinks that eventuality is an impossibility has not done the simple thought experiment that John King's reasoning requires.

Imagine -- I mean really imagine -- that you're watching CNN on June 7th and Hillary has just lost California, New Jersey, New Mexico, Montana, North Dakota, and South Dakota. This comes on the heels of losses in Indiana, West Virginia, Kentucky, and Oregon. Clinton hasn't won a state since April; she's behind Donald Trump in national polling; she's tied with or behind Donald Trump in all of the battleground states; she's lost the pledged-delegate battle to Bernie Sanders 53 percent to 47 percent since March 1st; she's lost 19 of the final 25 state primaries and caucuses; her unfavorables are the highest of any Democrat the Party has considered running since World War II; she's losing independent voters to Donald Trump; she's still under investigation by the FBI, and an international criminal is claiming (credibly) that he successfully hacked her basement server and stole classified and top-secret data; 40 percent of Sanders supporters are saying they won't vote for her; and she's come to look exactly like two other Democratic losers -- unlikable policy wonks Al Gore and John Kerry -- rather than the movement candidate Bernie Sanders is and Barack Obama was.

The Clinton camp is betting that Hillary loses zero super-delegates in this situation because -- well, just because.

The Sanders camp is betting that the Democratic Party cares more about winning in November than gamely running a terrible dynasty candidate against a beatable Republican foe.

In the hypothetical John King has imagined, that bet doesn't seem so unreasonable.

Every non-partisan in the national media who's actually looked at the above scenario has concluded that super-delegates would switch to Sanders in the situation described here -- the only question is how many. And if you've actually imagined the scenario described above -- if you actually imagined the rank panic that would be running through the Democratic Party should Hillary lose the largest state in the country to Bernie Sanders at a time when all the hard-data and environmental indicators are suggesting she's a possible loser in the fall -- you're thinking, as I am, that the answer to the question, "How many supers would jump ship in that scenario?" is the same answer I got from John King when I asked him this question directly after the Indiana primary: "Lots."

To get to that point, Sanders has to win Indiana -- which he's already done. And he has to win West Virginia, which he now has. Now he's looking ahead to Kentucky and Oregon next week, and Oregon looks like a safe win while Kentucky an eminently possible one. Should he sweep Clinton for the third Tuesday in a row, he'll be looking forward to just one final test: June 7th. Sanders is a plausible winner on that date in California, Montana, North Dakota, South Dakota, and New Mexico; his longest odds are in New Jersey, a state where he nevertheless polled within single digits of Clinton in the second-to-last poll taken in the state (the most recent poll is far less favorable, but also, given the political make-up of the state and the fact that Trump's lack of competitors on the GOP side will drive up interest and turnout on the Democratic side, less plausible). More importantly, perhaps, King's scenario doesn't even require that Sanders win New Jersey -- merely that he take nine of the final ten contests, and therefore a still-staggering 18 of the last 25. This isn't just doable -- it's entirely possible, given the momentum, demographics, and polling in the upcoming states.

Still, no one knows what will happen next week -- though the odds of Sanders continuing his current winning streak seem high. And if Sanders does win Kentucky and Oregon, John King's "run-the-table" scenario will be just one day of voting from becoming a reality. It's on those grounds that we can say -- whatever we might hear from Clinton partisans -- that the Democratic primary is, indeed, far from over.