The votes are in. Hillary Clinton is going to be the nominee for President for the United States. Rather than fracture a Democratic Party that so desperately needs unity right now to face down the threat of Donald Trump, I suggest Bernie Sanders be the next Senate Democratic Leader of the United States of America. 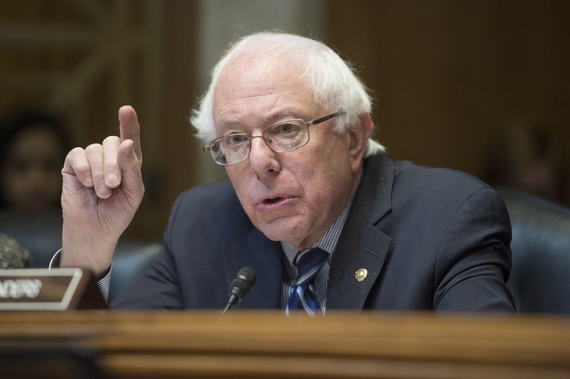 The traditional "second place finisher" move is to either Vice President or the cabinet. However, Bernie Sanders would not be a good pick for either. Bernie Sanders, at his core is a policy guy, and credit where credit is due, we got a lot of real policy discussion in a primary absolutely obsessed with process and sideshows. It's apparent to all of the voting populace that his policy arguments helped influence Senator Clinton's and bring her best face forward towards some progressive policies that were not as prevalent before.

It's a move worthy of Frank Underwood, Josiah Bartlett and Mr. Smith all in one, and Hillary Clinton is a very brilliant strategist, surrounded by some very smart people. Harry Reid is retiring and their fellow Senators elects Senate leaders every year in the new session. It absolutely makes sense, putting Senator Sanders in charge of the legislation that goes to her desk and putting him in charge of making sure President Clinton's nominees get a hearing and a fair vote.

Hell! A United States Senate led by Bernie Sanders could raise millions of dollars for new Senators like Kamala Harris and returning champions like Russ Feingold. An absolute necessity in a wave election such as this. Because it will be a wave, just not the direction that Trump supporters think.

"Oh, but that's Chuck Schumer's spot."
Really? Is it? Stuff changes and do you really think "the Senator from Wall Street" is the best choice for leading up the Democratic agenda in the next cycle? Really? I'm going to let you think about that.

The discussion of class has been restarted in a very big way, and the people have overwhelming said that the needs of Main Street eclipse the wants of Wall Street. The agenda coming from the (hopefully Democratically led) Senate needs to match that, and our place at the table needs to be one worthy of the respect of our numbers.

Or just call it our pound of flesh, call it our red meat. Call it whatever you want, but we need you to do something big for us. We need to see that all this talk of party unity isn't just placation for spiking the football in your face, we need you to acknowledge that the Democratic party is changing and growing and leadership needs to change with it. This would be a huge move to honor these new voters and keep them where they belong, with the Democratic party. It also would be a clear indicator that the (new) Clinton White House not going to follow establishment script and does not have a tin-ear to the base.

If you think things are way too contentious now for this kind of move, you clearly do not remember 2008. It's incredible how much common ground we have when we are find ourselves against an opponent that so clearly represents everything we stand against.

There is some precedent here as well, after the devastating loss of John Kerry to George W. Bush in 2004 an agitated and fired-up netroots put together an incredible campaign to get the insurgent candidate of 2004 placed as the head of the DNC. A gentleman named Howard Dean, who believed that we needed to contest every district and every election and make them fight for it. He was good in the role and it worked out great.

You ask us what we want; you ask us how we can get on the same side. This would be a great move, and a rising tide that would lift all boats. Can you imagine? Hillary Clinton in the white house, emboldened by the progressive values she has found that are so important to voters and a Senate led by Bernie Sanders? Cranking out incredible legislation.

A united party, working towards the betterment of these United States of America.
That is a thing we'd very much like to see.