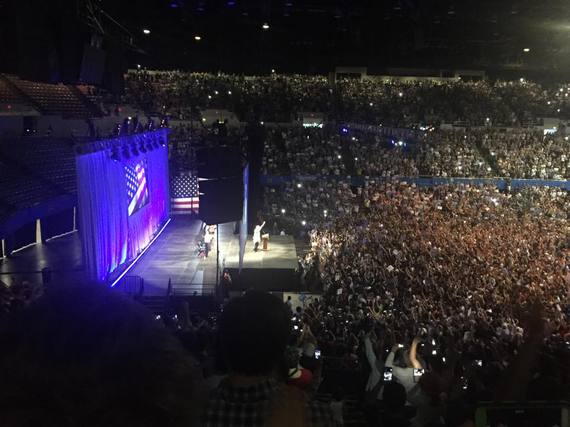 The Los Angeles Memorial Sports Arena overflowed tonight, not for a sports event, but to hear a 73 year old Senator speak about 'issues'. His last rally in Seattle 2 days ago reportedly had 15,000 people. Tonight's overflow crowd is reported as 27,500. And still the media is pretty much ignoring him. Let them. I don't think it bothers Bernie Sanders one bit. He's spent a career in politics not caring what people say about him, and only saying what he really cares about.

That should be political suicide in the corporate world of moneyed politics where you spend half your waking hours hat in hand with the people writing you the biggest checks and doing their favors, yet here he is, laughing all the way through his media black out to the largest over capacity rally he's spoken at yet.

While everyone else is battling over bashing Trump's latest nonsensical comments, or not challenging Jeb Bush on standard 'increase the retirement age' talking points, Sanders is experiencing a real populist movement.

A casual glance at his record shows decades where he's spoken consistently on issue after issue. When the media does discuss him it's about how he can't win. Lots of Clintonistas like Barney Frank are saying he can't be elected and shouldn't run as he'll hurt her chances. But once again, Bernie doesn't really care what anyone else is saying. He's just saying what he cares about...like he always has. And for the first time, lots of people are listening.

"We don't take money from billionaires, we don't take money from corporations," Sanders said early in his speech. "and we have raised the largest amount of any candidate from single donations." The crowd cheered in response. In fact the crowd cheered many times for more than an hour as he hit all the points he's been speaking out for his entire career.

So what's happened now? Why is he pulling in the largest crowds of any candidate in either party?

Maybe it's because he talks about the elephant in the room. And not just one elephant. He talks about herds of elephants. He comes out of the gate talking about how the GOP cares more about the oil companies than the world they are going to leave for their children and grand children, how war should be the last thing we aim for in global affairs, how he's sponsoring legislation for tuition free higher education for college students, how he backs big bank break ups, how he has a plan to tax wall street. Yes, you read that right. The list goes on and you don't know if you should laugh or cry. You want to laugh because someone is finally making sense. You want to cry because you've become so inured to the possibility of real change in a broken system bought by the capitalist elite that you've forgotten the word 'change' could even be a box on your checklist.

Remarkably, Sanders addresses all of this in every one of his appearances.

I spoke to a few of those present.

Adam Noble, 41, a business owner braved the crowds. He went to the University of Vermont twenty years earlier, so was familiar with the state Senator.

I had a feeling it was going to be a historic moment, wanted to see it myself rather than through a media lens. I've always had dreams he'd run one day. Right off it's unacceptable that a tiny minority has such vast influence over the political process because of wealth. And Sanders speaks about this constantly.


Kendra Doshier, 25, a producer in town, started off as a Hillary supporter but started to hear more about Bernie through social media and friends.

The media hasn't given him much attention, so I certainly didn't learn of his campaign that way. I attended the rally because I felt an obligation to show my support. He may not have the billionaires and the mainstream media behind him, but all of his supporters add up. We have to stand with him and show that we're listening.

Kendra didn't get to go in, as the stadium was at capacity when she arrived. So she stayed outside, with the other 9,000 or so supporters reportedly there.

It deterred not a single person - we all just kept marching over to those big TV screens. People were actually thrilled to hear about the overflow. Bernie's speech was moving. We were all united out there in the dark listening to every word he said, clapping in support.

I was curious about the man himself, I know Hillary and what she stands for (and with whom). I'm getting nothing but insults and psyche damage from the GOP. Sander's speech was exactly what I needed as an antidote to that debacle ...I've been disillusioned in our election process for many years (I didn't even buy into Obama's Hope). I think Sander's biggest problem is that he is an old white guy. But, by gum, I think he may have restored some faith in this ol' cynic.

Sanders introduced a new issue in his speech tonight. He said how we need to talk about youth unemployment, for those aged 17-20. 30% white, 33% are latino, 55% are African American. Do you think that's related to the prison population, he asks? " We can't ignore this problem." He just mentioned another elephant.

Anthony Wemyss, 42, an actor who's Australian who came here 8 years ago, loves the country, and can't even vote, came to hear Bernie in person.

I have never had the desire until now to see and hear a candidate speak in person and feel the movement he's trying to generate. He's the only one, even Obama didn't excite me that much. He covers so much ground on issues that no one else is. I can't vote, but wish I could. I'll be making sure as many people I know who can, will.

And you know what's stunning? Outside only two local news trucks. That's it. You would think a populist phenomenon like this would garner some media attention. "Well, when 3 giant corporations own the majority of the mainstream and easily accessible media, and the candidate they aren't covering is calling out that type of corporate corruption...connect the dots," offers Adam.

Whatever the reason, it seems you're not going to hear about it on the nightly news. So keep reading blogs like this one, there's a real populist movement in this country and it's happening under the media's radar whether they like it or not.

Sanders book ended his energy charged speech tonight with this: "If we stick together, we can do anything. If we don't let them divide us, black and white, men and women, straight and gay, we can make real change. Let's do it!" The crowd thundered a cheer in response.

This rally felt like real politics - as in the Greek polités; meaning citizen, where people matter. Don't laugh, because Bernie wouldn't care if you do.

Does Idealism have any place left in today's broken political system? I don't think Bernie Sanders worries about the naysayers. What matters to him is that he believes. That's why he's running for President. He's not saying what he thinks we want to hear, he's saying what he genuinely thinks can make a difference in the quality of life for the citizens of this country. Why isn't anyone else?

That's something I care about.

For more information on Bernie Sanders