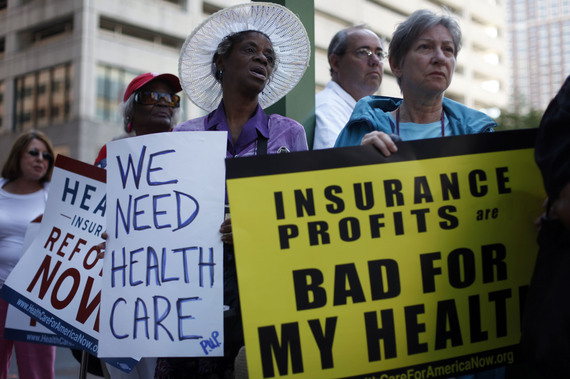 Contrary to Claims by the Washington Post and Fortune, the Vast Majority of the Poor Would Gain

In the heat of battling Sen. Bernie Sanders, Hillary Clinton's camp (and the camp followers at the Washington Post and Fortune magazine) has made a remarkable discovery: National health insurance (aka Medicare-for-All) hurts poor people.

How is that possible? It's not. But a widely-quoted analysis by Ken Thorpe, a former Clinton administration official, used statistical sleight of hand to zoom in on the tiny slice of the poor who might pay more (while getting better care), and hide the vast majority who would gain.

Here are the real numbers we came up with by analyzing data from the Census Bureau's 2015 Current Population Survey, the standard source for estimates of income and health insurance coverage.

At present 9.2 million people living in poverty -- and 8.8 million just above the poverty line -- are uninsured. They often can't get vital care, and when they do, they face ruinous medical bills. For these 18 million, Medicare-for-All would be a godsend.

Another 10.7 million poor Americans and 21.5 million near-poor have private insurance. For virtually all of them, the new Medicare-for-All taxes would cost less than their current premiums.

Some of this windfall would go directly to families that now pay all or part of their own premiums. The rest would go to employers who now chip in to premiums for the poor and near-poor workers, but most economists believe these gains would be passed on to workers since benefit costs are, in fact, deducted from wages.

About 9.7 million poor and near-poor people have Medicare, without wrap-around private or Medicaid supplements. The vast majority of them would be better off under Medicare-for-All, which would relieve them of Medicare premiums, as well as onerous co-payments and deductibles.

What about the 42 million poor and near-poor Medicaid recipients? This is the group that Thorpe (and recent articles and editorials in the Washington Post and Fortune) claims would be hit hard by the new Medicare-for-All payroll taxes, which their employers would pass on to them by lowering their wages.

Yet, 34.6 million (82 percent) of these 42 million are children, retirees or others who have no earnings. Hence, they wouldn't pay any new payroll tax.

Two million others earn no more than $7.25 an hour, the minimum wage, so employers couldn't lower their wages to make up for the new taxes.

Only 3 percent (1.2 million) of poor and near-poor Medicaid recipients earn more than $15 an hour -- the minimum wage that Sanders has proposed. That's the number of poor households at risk of financial losses. But even that overstates how many might be harmed, since some pay out-of-pocket costs that Medicare-for-All would eliminate.

It's a shame that even this small group might suffer, and we'd recommend that Sen. Sanders tweak his plan to protect them. That shouldn't be hard.

But his plan would relieve the poor, as well as the middle class, from the daunting co-payments and deductibles that obstruct care and threaten finances. And it would abolish the narrow provider networks that restrict patients' choice of doctors and hospitals. Instead, Americans could go anywhere for care, a privilege that every Canadian enjoys, but is rapidly vanishing in our country.

In every nation with national health insurance the poor -- and middle-class families -- fare better than here. They bear less of the health care cost burden, have better access to care, and live longer and healthier lives.

It takes extraordinary mental and rhetorical gymnastics to portray universal health care as bad for the poor. Having mastered that art, perhaps the Clinton team will turn its attention to repealing the law of gravity.

Steffie Woolhandler, M.D., M.P.H, and David U. Himmelstein, M.D., are professors of health policy and management at the City University of New York School of Public Health and lecturers in medicine at Harvard Medical School. The views expressed do not necessarily reflect the views of those institutions.