I support a fifteen dollar minimum wage; universal health care; making college affordable for all who want to go and restructuring current student debt; some of the issues which Bernie Sanders campaigned on. Never-the-less I didn't support him. My choice wasn't based on not liking those ideas rather on the fact there was another candidate whose experience and record showed she would be more able to effectively move those ideas and others she campaigned on forward through the Congress.

As a staunch life-long Democrat it has become increasingly annoying to hear Sanders make demands for a major voice in the Party of which he is not a member. He wasn't a Democrat when the party allowed him to run in its primary and my understanding is he isn't one now and doesn't intend to become one.

No rational Democrat should question the need for the Democratic National Committee (DNC) to be restructured and upgraded. It must change if we are to reclaim the Party's mantle as the 'Party of the People'. But the Democratic Party has a legacy and history with support from people who have proudly been part of it for years and they must not be ignored. It should not be a Party which can be usurped by Independents or others with no long term allegiance to it and still aren't willing to join it.

So to me who Bernie Sanders supports for DNC Chair is totally irrelevant. He ran in our primary and lost by nearly four million votes. The candidate who did win the nomination of the Party, though not winning the Presidency, ended up winning the popular vote by three million. So yes we want Sanders' supporters to be part of our Party, and clearly many already are. Many who are rational yet didn't support the Party's candidate now realize how mistaken they were as we see what a Trump Presidency will bring.

Pandering to Senator Sanders as Senator Schumer (D-NY) is apparently doing makes little sense. In the long run it will have little bearing on the future success of the Party. The only thing which can guarantee success and future strength are the principles the Party stands for.

The Democratic Party Platform was the most progressive ever written by any Party. It is important to elect as Chair someone who strongly supports it but also understands it will be viewed differently in each of the fifty states. The DNC needs to focus on building a strong State Democratic Party in every state. This is the only way to build majorities in Congress; win back governorships and state legislatures; and control redistricting after the 2020 census.

The next Chair of the Party must be someone able to speak to everyone as he/she will often be the face of the Party across the nation. Five have currently put themselves forward for consideration. We need to disregard who supports them and look at them as individuals. Announced candidates are; Labor Secretary Thomas Perez, New Hampshire Democratic Party Chair Ray Buckley, South Carolina Chair Jaime Harrison, Idaho Democratic Party Executive Director Sally Boynton Brown and Congressman Keith Ellison (D-MN).

Each has a record of accomplishment and much to recommend them. It is important to recognize the Chair will not only be charged with building the Party but viewed as a spokesperson for the loyal opposition to Donald Trump's presidency. Trump and the people who helped elect him will continue to play dirty politics. They will try to savage the choice the Party makes from day one which means it's crucial to find the person who can survive those attacks and go on to lead us forward.

The person who stands out from the five is Thomas Perez. He has a stellar progressive record and has had success in every position he has held. He has worked in local, state and the federal government and has experience in both the legislative and executive branches. He was an activist Secretary of Labor fighting for working men and women. He has a record of fighting for civil rights at the Justice Department and knows what it means to run for local office becoming the first Hispanic elected to the Montgomery, MD council.

Thomas Perez has the ability to unite the Party and help craft and deliver the message which will bring new voters to the Party without alienating the base who have stood by the Party for years. That is the kind of Chair we need.

I urge the members of the DNC, who have been elected by Democrats in all 50 states and the territories, to vote for Thomas Perez as their next Chair. 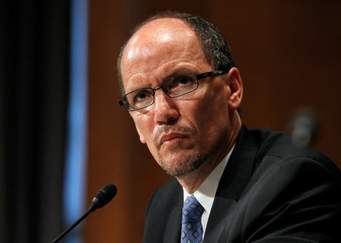