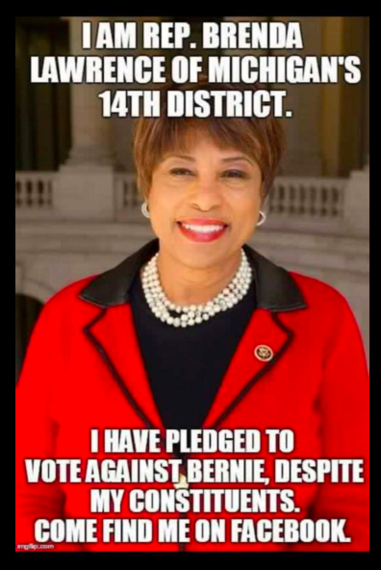 State Rep. Sam Singh (D-East Lansing) isn't in Congress. He's not a superdelegate. But that hasn't stopped Bernie Sanders supporters from posting on his Facebook page that he should "support the will of the people."

At least the Sanders activists have U.S. Rep. Brenda Lawrence (D-Southfield) pegged correctly. The congresswoman does back Hillary Clinton, just as more than 60 percent of her 14th District did in the March 8 primary (yes, even taking into account that Wayne County combined absentee ballots in two districts).

So Lawrence has no plans to switch her superdelegate vote because, as Campaign Manager Christy Jensen says, she believes "hands down, that Hillary Clinton is clearly the highest-qualified candidate running for president in either party."

When Lawrence bumps into Sanders supporters at events, they're always "kind and respectful," Jensen says. The same can't be said about the flood of "bashing" phone calls and Facebook posts in which the congresswoman was "called horrible names -- things you can't print." Those have been taken down, but plenty of other angry comments remain.

An innocuous Facebook post last month about a national arts competition was typically spammed by Sanders supporters, like one who warned: "You need to look in mirror and be a true representer of your district ... please vote the way your district votes ... this IS your job."

Who knows if these commenters live in Michigan or could even find the 14th District on a map. Jensen wonders if many of the so-called "Bernie Bros" are just far-right operatives trying to create chaos.

Of course, Lawrence is far from the only superdelegate target in Michigan or nationally. The outrage-fueled online campaign includes sending automatic tweets to supers, tying up phone lines, posting memes with their pictures urging Sanders supporters to "Find Me On Facebook" and even publishing their personal information online.

So how did things start to spin out of control?

Sanders has been harping on superdelegates for months, first complaining they were unfair and then announcing his campaign will try to turn them. Naturally, the senator hasn't endorsed the more extreme tactics against superdelegates, but he hasn't gone out of his way to tell folks to simmer down, either.

Fortunately, the harassment strategy seems to have died down a bit. Maybe reality (and math) is starting to set in.

After all, Sanders lost big in New York on Tuesday. To clinch the nomination, he'd have to win roughly 60 percent of the remaining pledged (not super) delegates, with primaries in unfavorable states like Pennsylvania and Maryland looming.

In other words, Sanders is now a complete long-shot.

However, Sanders adviser Jeff Weaver isn't waving the white flag. He declared Tuesday night that the campaign is going all in on wooing superdelegates. The new line of argument is that Sanders is a stronger general election candidate, so supers should flip to his side.

Of course, that's a fairly specious claim. Clinton has been bloodied for decades and has received the most negative coverage this campaign, per Vox -- more than bigoted blowhard Donald Trump. GOP operatives have barely laid a glove on Sanders -- they'd rather run against him because they think he's a weaker candidate than Clinton. Now, that may not be a correct assessment, but that is the calculation conservatives have made.

Then again, too many Sanders supporters seem to believe that superdelegates are a new Democratic National Committee plot hatched just to deny Sanders the nomination. Love 'em or hate 'em (I'm personally not a fan), but they've been around for years.

And the last Democratic presidential upstart, Barack Obama, somehow figured out a way to win under similar rules. I know. I reported extensively on the 2008 delegate fight in Michigan and nationally, examining Obama's meticulous long game and Clinton's myriad miscalculations.

So my pro-math record is well-established, even though diehard Sanders supporters don't care. Back in '08, it was Clintonistas sending me hate mail over it.

This year, Clinton wised up and hired many of Obama's nerds to help her navigate the process. Personally, I respect politicians who learn from their mistakes instead whine about life being unfair.

If Team Sanders goes all in with the superdelegate strategy, it will almost certainly flop. Elections are, after all, popularity contests. And the truth is that the prickly independent senator isn't exactly beloved by Democratic leaders (although he's certainly not as loathed by his colleagues as Ted Cruz is). That's one big reason why Sanders lags behind in superdelegates.

Maybe Weaver's vow is the flailing bluster of a doomed campaign. Maybe it will rev up unhinged Sanders supporters to start their superdelegate cyber-stalking again.

Whatever the case, it's going to do precious little to derail Hillary Clinton's march to the nomination.

Susan J. Demas is Publisher and Editor of Inside Michigan Politics, a nationally acclaimed, biweekly political newsletter. Her political columns can be found at SusanJDemas.com.