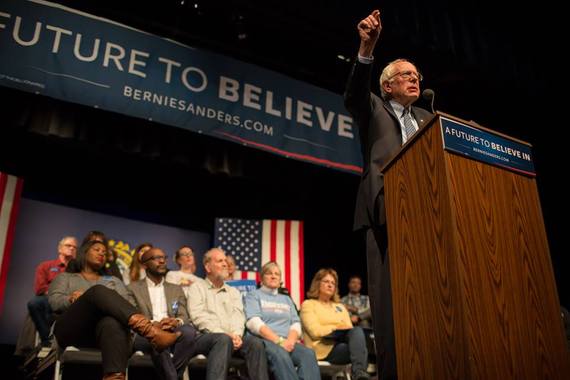 There was once a man from Vermont who launched a Presidential campaign. He pioneered an avant-garde method of fund-raising for his election campaign: foregoing large corporate contributions in favor of small personal donations. He utilized the internet to recruit a large number of people who rallied to his message of challenging the current economic paradigm. He vowed to repeal all Bush-era tax cuts for the rich and replace them with tax-cuts for the middle class. He advocated Universal Healthcare and stated that health reform without the Public Option was of no use. Up to 350,000 people donated to his campaign which raised a total of 53 million dollars. He was leading most polls among Democratic voters till a month before the Iowa caucus.

That man's name was Howard Dean and in the weeks leading up to the 2004 Iowa Democratic Caucuses cable news and much of liberal media launched a relentless assault on his campaign. Al Gore's endorsement of him was construed as a "betrayal" of his 2000 running mate Joseph Lieberman and furthermore was a sign that the Democratic Party was leaning too far to the left. He was too soft on terrorism and too harsh on Israel. Saddam Hussein's capture was deemed an indictment of his opposition to the Second Gulf War.

Come the Iowa Caucuses he slipped in last minute polls and ultimately finished a distant third, getting only 18 percent of the Democratic vote. When his voice squeaked while giving a passionate speech to rally his disappointed supporters the night of the Caucuses, the media had a field day with jokes about Howard "the scream" Dean. On the basis of one inconsequential gaffe he had somehow become unfit to run for the Presidency.

The parallels of the early part of Howard Dean's campaign with the Sanders campaign are obvious. Both have appealed to a large number of voters because of their clear stand against corporate lobbying and the current taxation system. Both found inordinate support amongst American youth (whose current interest in politics is possibly the highest it has ever been). Both were successful in raising an incredible amount of money without super-sized donations from big business.
We must do our best to ensure that the parallels end here and do not extend to the latter part of the Howard Dean campaign.

Even as momentum grows in the Bernie Sanders campaign his supporters must remain vigilant. He is indeed the first "outsider" to throw a real challenge at the status quo. This current Presidential contest has already seen the most unashamedly tactless rhetoric in electoral history on the Republican side. As the Caucuses draw near and the stakes get higher, it is hard to imagine things getting anything other than more heated, dirty and no-holds-barred. It is not a matter of if but of when the jabs and the insinuations will come.

This campaign will be anything but easy for Senator Sanders and his supporters. The political lobbies, especially those emanating from Wall Street will push back hard against anyone who threatens their influence and their wallets and a Bernie Sanders Presidency promises exactly that. Those who believe in ending the influence of corporate America in politics, taxation reform that benefits the Middle Class and universal healthcare will need to remain steadfast in their support of Bernie Sanders. Both their loyalty and optimism will be challenged in days to come. Winning will require both.