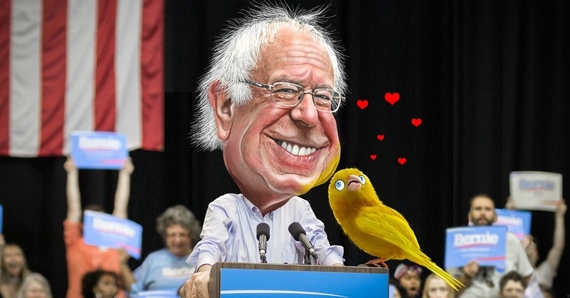 "In the coming days and weeks," writes Weis, "voters in Indiana, West Virginia, Kentucky, New Jersey, Montana, New Mexico, North Dakota, South Dakota, Oregon, California and Washington, DC have a chance to write their names into the history books as protectors of the flame of the political revolution."

Take heart, Sanders supporters. We're down, but we're not out.

Bernie's difficult path to the nomination just got a little rockier, but it's still three months to the Democratic National Convention in Philadelphia. If there's anything I've learned from my years in presidential politics, it is to expect the unexpected, and that three months is an eternity in a political campaign. Anything can happen.

As they have tried to do throughout this campaign, the corporate media and political establishment are once again trying to coronate the Clintons before the votes are counted. In an affront to the democratic process, some are even calling for Bernie to get out of the race. This a slap in the face to millions of voters in ten states, three U.S. territories and the District of Columbia who have not yet had their say in who the Democratic nominee should be. Sanders surrogate Tim Robbins said it best at a campaign rally in Wisconsin:

"We are no longer surprised. We get it. You want Bernie to go away. You want your anointed candidate to win."

Well, Bernie is not going away. Bernie is going all the way.

Sanders currently trails Clinton by about 330 pledged delegates. To overtake her, he needs to win 65% of the remaining 1083 pledged delegates (California has 475), a steep, but not impossible, climb. Even more unlikely, though, is for Clinton to reach a majority of convention delegates with pledged delegates alone. This means we're headed for a contested convention in Philadelphia, where it will be decided which candidate is the Democratic Party's best hope to win the White House in November.

There, convention delegates will have to weigh the fact that Senator Sanders, not Secretary Clinton, consistently polls the strongest against Mr. 1%, Donald Trump. They will also have to weigh Hillary's likeability and trust liabilities against Bernie's unprecedented popularity with young voters, Independents (42% of Americans), and even Republicans. The outcome will hinge as much on politics as on math.

I have nothing personal against Hillary Clinton, but I do have a problem with entrusting our future to an establishment politician who got it so predictably wrong on the Iraq War; who supported trade agreements that destroyed millions of good-paying American jobs; who made it her job as Secretary of State to sell dangerous fracking to the world; and whose campaign is funded by Wall Street billionaires and super PACs (to the tune of $3.25 million from fossil fuel interests).

As to that last point, maybe you saw Hillary's response to a perfectly reasonable question asked by a climate activist in a rope line at one of her campaign events: "Thank you for tackling climate change. Will you act on your words and reject future fossil fuel money in your campaign?"

For a presidential candidate to lash out like this at a young person who has so much more at stake (like potentially her own long-term survival) than the candidate in how things turn out over the next half century is just wrong.

Days later on "Meet the Press," Hillary insulted millions of young Sanders supporters by speaking condescendingly about those who don't trust her to lead on climate: "I feel sorry sometimes for the young people who, you know, believe this; they don't do their own research." Well, some friends and I did a little research of our own and this is what we found: 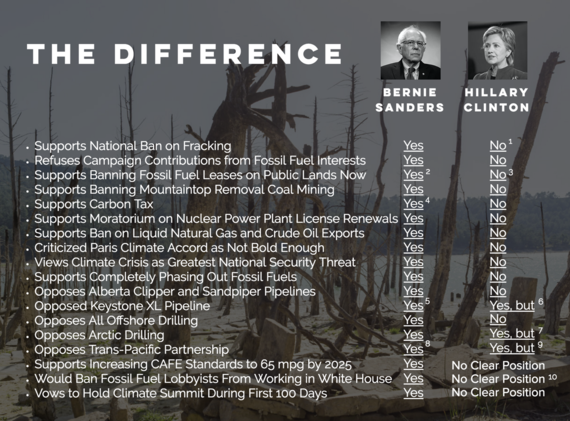 Hillary represents timid incrementalism at a time when the people are restless for bold transformational change, and at a time when such dramatic change is needed to ensure our survival as a species. Fortunately, we have another choice. Consider what Bernie had to say about the climate emergency at the last Democratic debate:

"On climate change... we have a global crisis. Pope Francis reminded us that we are on a suicide course. We have got to stand up and say right now, as we would if we were attacked by some military force, we have got to move... urgently and boldly... in 1941, under Franklin Delano Roosevelt, we moved within three years... to rebuild our economy to defeat Nazism and Japanese imperialism. That is exactly the kind of approach we need right now."

Because we have waited so long to act, a Sanders administration-led national mobilization may be our last best chance to get it right. We are already breaching the dangerous heating threshold 196 nations just agreed in Paris not to breach. We don't have the luxury of appeasing the fossil industry for four more years. Maybe that brave little bird who flew onto Bernie's podium in Portland knows something the rest of us don't. This much I do know: the stakes in this election could not be higher for humanity and for all life on Earth.

When our children look back at this chapter in America's history, how will the story end? Will they mourn our tragic embrace of more of the same that failed to avert climate catastrophe? Or will they celebrate the success of a once-in-a-lifetime president who, against all odds, sparked a political revolution that rallied America to heroically respond to the gravest threat humanity has ever faced?

In the coming days and weeks, voters in Indiana, West Virginia, Kentucky, New Jersey, Montana, New Mexico, North Dakota, South Dakota, Oregon, California and Washington, DC have a chance to write their names into the history books as protectors of the flame of the political revolution.

Which side of history do you want to be on?