Indeed, neither Trump nor Sanders speaks in carefully crafted focus group-driven messages, and neither is beholden to special interests (albeit for very different and significant reasons). Both seem quite comfortable in their own skin as they freely express who they are and what they believe. And both have distinct accents from the New York City boroughs (with cadence and gesticulation to match). But the similarity ends there.

Authentic communicators show us who they really are as human beings; they reveal their worldview and priorities through words and through nonverbal behavior. What Trump and Sanders have revealed couldn't be more different. Where Trump's authenticity reveals an enormous ego, ignorance, and mean-spiritedness, Sanders' authenticity reveals two important character traits that Trump and the other 2016 contenders lack: compassion and integrity. These three traits--authenticity, compassion, and integrity--add up to something greater than the sum of their parts, and that something is morality.

While the media's obsession with Trump has fueled his rise and reduced the campaign to a reality TV show, Sanders has brought morality to the national discourse, and would be elevating the discourse even further if he and his ideas were given more media coverage. What if the American people really understood Democratic Socialism? But the media, licensed to serve the public interest but responsible only to major shareholders, is threatened by Sanders' integrity and by his compassionate, do-able agenda. Sanders' morality (like the Pope's) makes the protectors of the status quo uncomfortable.

Sanders' compassion is reflected in what he talks about most often--the imperative to address income and wealth inequality, and other policies that would reduce hardships on working people. A $15 minimum wage, affordable college, student loan interest reduction, paid medical and family leave, quality childcare, and single payer health care, would improve the quality of life for millions of Americans. These concerns, and his call for action on climate change are shared by the majority of Americans. These are not radical ideas. 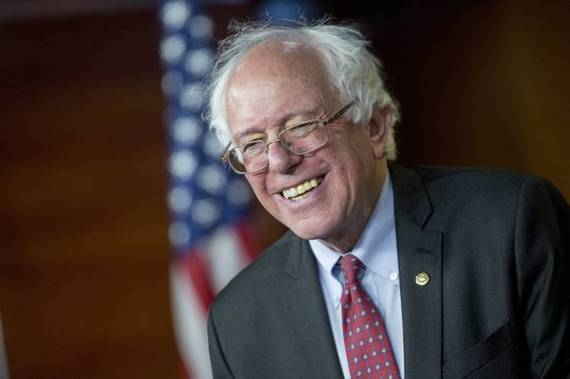 Sanders refuses to take money from PACs or big donors, relying instead on the power of his ideas, social media, and his ability to raise campaign funds directly from the American people (at an average of $31 each). Integrity like this is rare in politics. Like Senator Elizabeth Warren, he's in office to be a public servant and can't be bought. He's in Washington to use the power of his office not to further his own interests, but to further the interests of the American people.

Sanders is not new to the hot issues of the day, such as police brutality, workers' rights, gender equality, and LGBT rights. And while he may represent the whitest state in the nation, he's been fighting for economic and social justice for people of color for decades. His consistency and persistence on these issues also speak to his integrity. He hasn't wavered.

Some observers say, "Bernie sounds angry" or "grumpy." What they're seeing is moral outrage and seriousness of purpose--two other qualities lacking in the 2016 candidate pool. Whether schooling his hawk colleagues on the human cost of war, or schooling the science-deniers about climate change, Sanders speaks with the passion and urgency of a father and grandfather who wants to leave a better world and a livable planet for the next generation.

Sanders' unusual combination of authenticity, compassion, and integrity makes him a mensch¬--a word not applicable to many politicians today. The Yiddish word comes to mind, but not because Sanders is a Jew from Brooklyn. Elizabeth Warren, a Methodist from Oklahoma City, is also a mensch. There's a certain kind of public figure, a certain way of being in the world and relating to others and the work at hand that makes one a mensch. Compassion, integrity, and authenticity are three key components.

But Sanders would bring more than morality to the White House. He has decades of experience in the House and Senate. He knows how Washington works (or, more accurately, doesn't work), yet he's not an insider in the usual sense. He hasn't been co-opted by the system. He has the skillset and mindset required to not only lead this country but to begin restoring and repairing our democracy.

Some of my progressive friends say they love what Sanders is saying but he can't win. They say Sanders supporters are naive. But I guess I'm not that cynical and I'm not resigned to America's continuing decline. It's painfully obvious to anyone paying attention that corporate greed is destroying our country and our planet, but Bernie Sanders is the only candidate talking about it and the only candidate willing to do what's required to reverse these trends.

The media will likely remain obsessed with Trump and his peculiar authenticity. Once-serious journalists will continue to be amused by his blustery spectacle, wondering why he's so popular but refusing to see their role as Dr. Frankenstein. And despite his surge in the polls and the power of his message, the media will likely continue their minimal coverage of Sanders--the only mensch in the race.