There was a time in Democratic party politics when the mother of all surrogates was said to be Bill Clinton. Now, there's something bigger, The Pope, and Bernie Sanders just landed him. Well, sort of.

Sanders has been admired by both ends of the political spectrum for his acumen and the staying power of his insurgent campaign for the democratic presidential nomination. This is in no small measure due to his instincts for and mastery of influence strategy. 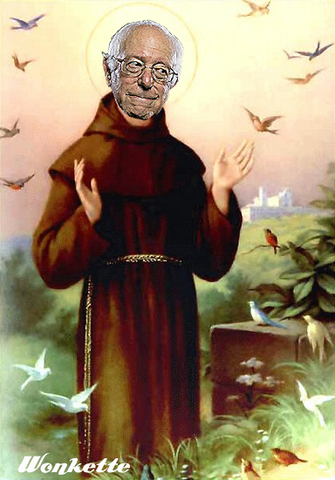 Among his better moves was a September 2015 speech at Liberty University, a modern bastion of hard-right politics. Sanders had no immediate need to visit Liberty. Such a move is usually reserved for the post-nomination games. But Bernie thought to break bread early with a constituency that could only be a downstream foe. Outside a semi-supportive record on gun rights, his positions on abortion, climate change, healthcare and same-sex marriage among other signature liberal stances are not exactly what the God-fearing folks in Lynchburg, VA, were just dying to hear from a Jewish democratic socialist. But he went there to make proactive peace with the evangelicals and was lightly applauded for his effort. As detailed in this post, his play was the crazy ivan.

WHEREAS HILLARY HAS BUBBA. BERNIE HAS FRANCIS.

Now, as Sanders mounts a final challenge to Hillary Clinton in the fast-approaching New York State primary, he's making similar moves on another fortress of Christian solidarity, the Roman Catholic Church. Sanders has accepted an invitation to speak at a Vatican-hosted conference on social issues.

It's a high-risk decision, to campaign in New York from Rome. Conventional spin has called his trip a "departure" from the campaign trail. But trails today are more virtual than physical; the media will follow. The novelty and the auspicious backdrop will feed the news cycle while reinforcing Bernie's authentic brand and, by implication, deepening the image of an isolated and inauthentic Hillary.

His play is a twofer: The peacock, the strategy that banks on novelty. And screen, a framing play that glues issues, ideas or objects to a player that are larger than what the player can project on its own -- in this case the company of the massive global catholic community and the abiding oversight of Pope Francis.

The Vatican has denied that the Sanders invitation is Francis' handiwork. But it's not worked overtime to disavow the common agenda of the Pope and senator. So whereas Hillary has Bubba. Bernie has Francis.

Will Sanders' Italian interlude close the gap for the decisive New York primary? Maybe. While the Clintons struggle to explain their recent Sister Souljah gaffes, Sanders will be playing on the biggest possible and best available stage for telling his story of equality and fairness, all wrapped conveniently in the package of faith, all delivered by a Jew in the company of an inclusive Pope.