If you guessed "Courtney Love," you've watched too much VH1 Behind the Music. I'm talking about 1920s blues singer Bessie Smith, and the hot dish I uncovered about her X-rated, rockstar exploits while researching the term "buffet flat" for The Language of the Blues: From Alcorub to Zuzu.

Bessie Smith was a 5'9", 200 lb. goddess with mischievous eyes, a face like a full moon and a magnificent voice. Despite her flawless pitch and strong, clarion-clear tone, she was rejected by the powerful black-vaudeville producer Irvin C. Miller because her ebony complexion conflicted with his motto: "Glorifying the Brownskin Girl." 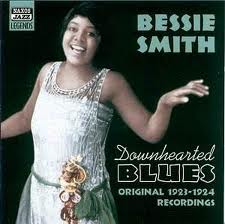 Smith finally cut her first song for Columbia Records in1923, when she was almost 30. Her first single, "Downhearted Blues," sold nearly 800,000 copies in six months, making her a sensation who sold out whites-only theaters as quickly as she did black venues.

Smith was invited to sing at an elegant soiree held by New York Times/Vanity Fair critic Carl Van Vechten and his wife in their Fifth Avenue digs. Van Vechten was interested in black artists and writers, and helped promote the Harlem Renaissance. The crowd that evening included Fred and Adele Astaire, Langston Hughes, and George Gershwin. 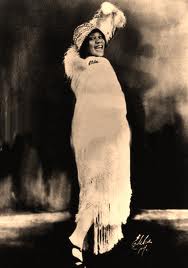 Smith was resplendent in a white ermine coat and sequined dress. She was also knocking back whiskeys between every song. When, at the conclusion of her performance, Mrs. Van Vechten threw her arms around Smith's neck and tried to drag her head down for a kiss, Smith exploded: "Get the fuck away from me, I never heard of such shit!"

"Lord," Smith's niece and backup dancer Ruby Walker recalled in an interview with biographer Chris Albertson, "Bessie's piano player almost fainted. When she said 'shit' it just sounded so much nastier . . . like when she said 'kiss my black ass.' I don't think no one could say it nastier than Bessie." (Hear the entire interview on Bessie Smith: The Complete Recordings, Vol. 5.)

Smith was incapable of Uncle Tom-ing, but that didn't stymie her career. She became the world's highest-paid black entertainer. Smith's troupe criss-crossed the U.S. in a custom railroad car, dazzling audiences at packed engagements and partying after hours at black-owned speakeasies called "buffet flats." These provided food and lodging for traveling African-Americans -- barred from segregated hotels -- plus a freewheeling buffet of booze, drugs, hookers and sex shows. All in private apartments, or "flats."

By 1927, at Prohibition's height, a newspaper article titled "Buffet Flat Solves Many of High Society's Drinking Problems" estimated there were around 10,000 buffet flats operating in Manhattan and Brooklyn, and thousands more in Chicago and Detroit.

Buffet flats also served as banks for the African American community's most respectable citizens-- the porters that staffed George Pullman's sleeper rail cars. Pullman porters were better paid than most African Americans at the time, but they were constantly traveling and needed to safely deposit their earnings. During layovers in cities like New York and Detroit, porters banked with the buffet flat madams.

"If you were carrying a lot of money," a retired porter told Albertson, "you would leave it with these women rather than have it in your pocket."

A buffet flat is nothing but faggots and bull daggers. Everything, everybody that was in 'the life.' Buffet means everything goes on. They had a faggot that was so great that people used to come there just to watch him make love to another man. He'd give him a tongue bath and by the time he got to the front of that guy he was shaking like a leaf. People would pay good just to see him do his act.

One night, Ruby and Bessie were at a buffet flat with "three girls, myself, and one gay fellow. We all got to drinking and having this ball and all the sudden Bessie said, 'Oh shit, stop all this motherfucking around and let's get naked and be ourselves.' Well, we had one full-size bed and everybody got in that bed. Talk about knowing what to do, there was three girls, and Bessie and I and the landlady -- that's six. Do you know that cat went through the whole crowd? And got up and walked like a man! She said, 'I've had my ball, now I'm gonna call up my husband.'"

Smith immortalized a buffet flat she and Ruby partied at in Detroit in "Soft Pedal Blues." The pianist is using the soft pedal, because the madam doesn't want to be busted for keeping the party going all night.

There's a lady in our neighborhood who runs a buffet flat
And when she gives a party, she knows just what she's at

You give a dance, say Friday night, that was to last till one
But when the time was almost up, the fun had just begun

She walks into the room, and yells to the crowd
"Have all the fun, ladies and gentlemen, but don't make it too loud!"

Smith stops short of describing exactly what went on at the flat, beyond singing:

I'm drunk and full of fun, go and spread the news
I've got them soft pedal blues

Bessie Smith's creepy husband and self-styled manager, Jack Gee, claimed to despise her libertine "showfolk" lifestyle, although he had no problem with the gifts and money Smith lavished on him.

Gee would periodically get on his high horse and leave the tour, so Smith took up with her handsome musical director, Fred Longshaw, although the affair would end whenever Gee returned. The whole troupe was scared of Gee. He would walk into Smith's dressing room and knock her down -- but she wouldn't stay down long.

"She would get up and say, 'Oh, you motherless bastard!' and beat him," Ruby recalled. "One time she took his gun and shot at him. Jack had been laying up with this gal so Bessie grabbed Jack's gun, but first she took the gal and beat her up and threw her on the track. Jack jumped off the train and ran up the track. Bessie emptied his gun shooting after him and never hit him once. Well, she didn't really want to hit him," Ruby added, laughing.

Smith's next lover was Lillian Simpson, a school chum of Ruby's who had joined the show as a dancer. One night Smith embarrassed Simpson by kissing her in front of Ruby. When Simpson pulled away, Smith said, "The hell with you, bitch. I got twelve women on this show and I can have one every night if I want to. Now don't say another word to me while you're on this show."

Being shunned was more than Simpson could bear. She tried to gas herself in her hotel room, but Bessie and Ruby broke in and rescued her. Simpson left the tour and Bessie began seeing another dancer.

Smith's husband couldn't rein her in, but he took her money and used it to produce a show for light-skinned beauty Gertrude Saunders. When Smith found out, she "cried like her heart would break," according to Ruby. Smith's sadness soon turned to rage, however. Courtney Love may have thrown a shit fit when indie folksinger Mary Lou Lord claimed Kurt Cobain had a thing for her -- but Smith tracked Saunders down in New York, beat her up and left her unconscious on the sidewalk. Smith was arrested and forced to pay a fine.

After another decade of recording, performing, and hard-partying, the Empress of the Blues died at 43 of injuries suffered in a car accident outside Clarksdale, Mississippi. Some have claimed she died because the nearest hospital refused to admit a black woman, but in actuality two ambulances arrived at the scene around the same time -- one from a black hospital and one from a white hospital.

According to a surgeon coming home from a fishing trip who had pulled over to help Bessie, her right side was crushed and her right arm was almost completely severed. She never regained consciousness and died at G.T. Afro-American Hospital in Clarksdale.

Although her funeral was attended by over 7,000 people, Smith's grave remained unmarked for years because Gee kept pocketing the money for her tombstone. Another hard-living blues-woman with a riveting voice, Janis Joplin, saw to it that Bessie finally got her marker in 1970.

She may have had a rotten husband, but The Empress of the Blues was loved and admired worldwide. "I believe there are only two truly regal women in this world," Prince Charles of Wales once said, "my mother and Bessie Smith."