The earliest work represented in the book is Beowulf, a fifth- or sixth-century story of a Scandinavian warrior hero. Among the most recent are the notebooks of poet Wendy Cope, whose slyly humorous language engages with the everyday aspects of human existence. In between those two works (or worlds), separated by 1000 years, are original manuscripts of poems, romances, nonsense verse, short stories, novels and many other genres by writers such as Chaucer, Shakespeare, Defoe, Blake, Wordsworth, Austen, Keats, Byron, the Brontë sisters, Dickens, Tennyson, Lear, Hardy, Wilde, Conan Doyle, Conrad, Forster, Joyce, Woolf, Larkin, Plath, Hughes, Auden and Stoppard. In an age that allows the almost infinite cloning of texts and images, the joy of a privileged peek at a single, unique artefact, that preserves the creative spark of talent, remains unsurpassed.

But what of the future of writing? We hear more and more how today's authors eschew the notepad and the typewriter in favor of the PC, laptop, tablet or even mobile; of their neglect of the postbox in favour of the email account, Facebook status update or tweets. Yet the history of literary transmission, from the grandest of narratives to the slightest of couplets, has always been a history of change, from tales told round the fire, to vellum, to paper, to printing, to the typewriter, telegram, and computer. This slideshow features 14 of the most important literary figures associated with these Islands from the last 1000 years.

PHOTO GALLERY
Manuscripts from the 14 greatest British writers
Download
Calling all HuffPost superfans!
Sign up for membership to become a founding member and help shape HuffPost's next chapter
Join HuffPost 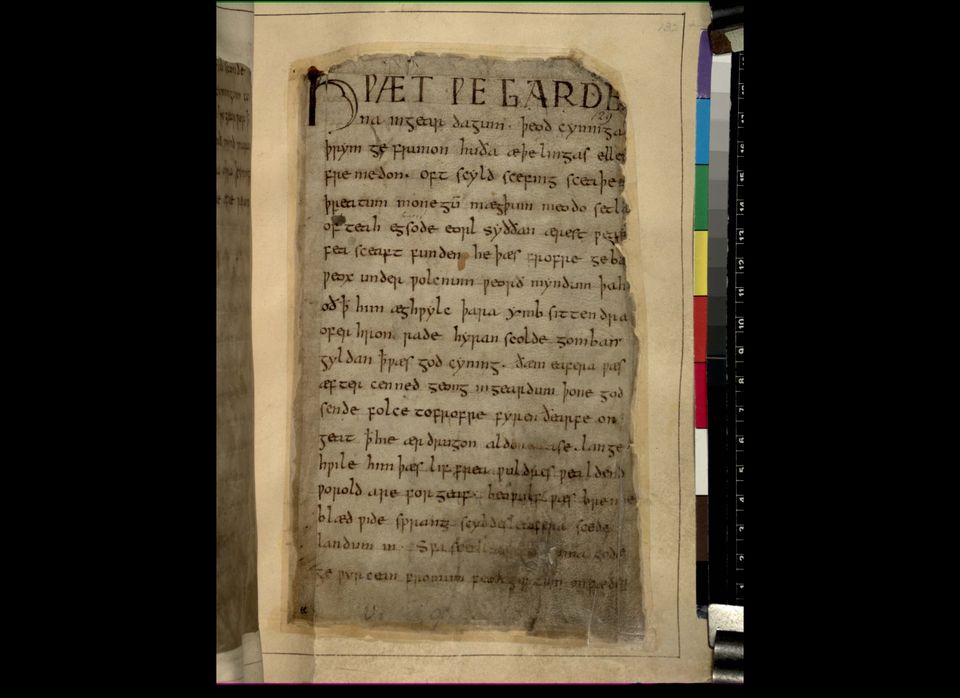 1 / 14
"Beowulf"
The origins of the work which stands at the very beginning of the English literary tradition remain shrouded in mystery. It has been conjectured that "Beowulf" emerged from an oral tradition as early as the seventh century but it is known to us only from the miraculous survival of a vellum manuscript written out in Old English by an anonymous scribe around the year 1000. The poem tells the story of Beowulf, a Scandinavian warrior hero, who rids the Danish kingdom of a terrible monster, Grendel, and his vengeful mother. Many years later, after decades of peace, a dragon attacks Beowulf's people and Beowulf is mortally wounded. Shown here is the opening of the poem.