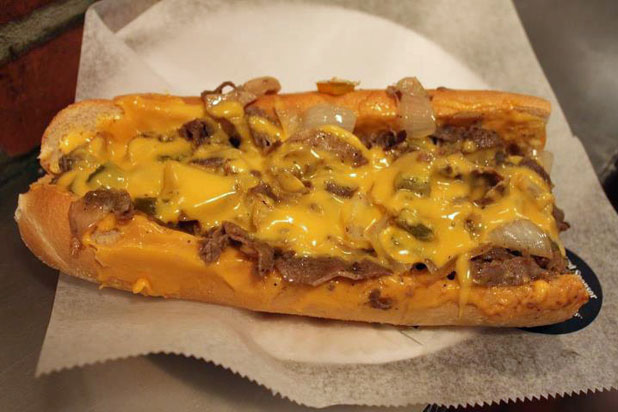 The mere fact that you're reading this story means that you know Philly cheesesteaks are absolutely delicious. You probably live outside of Philadelphia and are wondering what you can do to optimally satisfy the hankering you've been having for a sub sandwich topped with freshly grilled steak, sautéed onions and peppers, and either provolone or cheese whiz (Photo Credit: © Facebook/Carl's Steaks).

Click here to see The Best Cheesesteaks Outside of Philly

The origin of the Philly cheesesteak dates back to 1930; Pat Olivieri, a hot dog vendor in South Philadelphia who had undoubtedly grown tired of eating his own hot dogs, threw some freshly butchered beef on his grill. A taxi driver smelled what Olivieri was cooking and asked for a steak sandwich instead of a hot dog.

According to the narrative, Olivieri's hot dog spot was flooded with taxi drivers who had heard of the delicious creation and wanted to try it for themselves. Olivieri soon opened up Pat's King of Steaks at 9th Street and Passyunk Avenue, eventually adding cheese to his sandwiches.

In 1966, Geno's opened up across the street. Both establishments are open 24 hours a day and are in constant competition for the title of best cheesesteak in town. In fact, Geno's founder, Joe Vento, claims that he, not Olivieri, was the first to add cheese to the steak sandwich.

But what do you do if you live outside Philadelphia and have a craving for the delicious sandwich? You could make one yourself, but who has that kind of time nowadays? And couldn't restaurants do a better job of replicating the exact ingredients?

Luckily, The Daily Meal has searched far and wide to bring you 15 such establishments. From New York City to Los Angeles, we've got you covered. Many of these spots, like Joey's in Detroit or the Cheese Steak shop in San Francisco, have fresh Amoroso's bread and desserts from Tastykakes shipped in directly from Philly.

Best Cheesesteaks Outside of Philly