With 2012 nearing its conclusion, HuffPost Chicago reached out to some of city's most prolific trendsetters and thought leaders in style, music and culture and asked them to share some of their favorite local places and things from the year. We'll be rolling them out on the daily through New Year's Day.

When it came to the world of theater this year, Chicago was much, much more than merely New York's "farm team" -- a designation from New York magazine we still resent. The Windy City is bulging with world-class productions ranging from international mega-hits to tiny storefront originals, so we've got some room to boast here.

Scotty Zacher, founder and editor of Chicago Theater Beat, one of the city's foremost theatre-centric blogs, shared his selections for the standout shows that took to the stage this year.

Listed below are his top 10 picks -- plus two honorable mentions -- listed in alphabetical order. All text below is Lauren Whalen's. Read more of Whalen's musings on theater and culture. 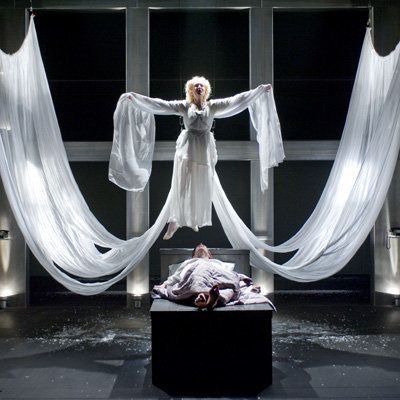 1 / 12
Angels in America: Millennium Approaches and Perestroika - Court Theatre
Staged in full, "Angels in America" is truly epic: a seven-hour “gay fantasia on national themes” that encompasses the AIDS crisis – and faith, work, drug addiction, dreams and every imaginable form of love. Director Charles Newell took Tony Kushner’s seminal script head-on, assembling the crème de la crème of Chicago actors and granting them the perfect balance of intense guidance and artistic freedom. Standouts included Larry Yando as a closeted and infected attorney, Rob Lindley as a nurse abandoned by his lover and experiencing increasingly ethereal visions, and Hollis Resnik as the haunting specter of executed spy Ethel Rosenberg. With its intensely ambitions subject matter, Angels in America could have been a mess. In the hands of the dream team of Kushner and Newell, it’s elevated to a groundbreaking, life-changing, truly great work. <em>(reviews: <a href="http://chicagotheaterbeat.com/2012/04/19/review-angels-in-america-part-one-millennium-approaches-court-theatre/">Part I</a> and <a href="http://chicagotheaterbeat.com/2012/04/19/review-angels-in-americapart-two-perestroika-court-theatre/">Part II</a>) </em>
Michael Brosilow