As 2011 draws to a close, we asked some of Chicago's experts in style, music, art and theater to share their favorite places, people and things of the year. On Wednesday, Pete Zimmerman of CHIRP Radio and The Steve Dahl Show rounded up his favorite Chicago bands, albums and songs of the year. Today, Refinery 29's Chicago Editor Shani Silver shared the shops and designers she couldn't live without in 2011. It has also been an exciting year for local theater -- and Chicago Theater Beat has been covering countless shows around town. CTB's founder and editor Scotty Zacher was kind enough to share his favorite 10 plays of 2011 with HuffPost Chicago, with summaries written by CTB reviewer Lauren Whalen. For all the theater reviews you could dream of, follow CTB year round here.

What makes a home, a neighborhood, a culture? These questions were raised, analyzed and deeply felt, by characters and audiences alike, in director Amy Morton's brilliant interpretation of Bruce Norris' Pulitzer Prize-winner. Each act spanned one day in a separate decade in a rapidly changing area of Chicago, requiring the phenomenally intelligent cast to each play multiple roles. Opening with an innocuous remark about Neapolitan ice cream, Clybourne Park quickly escalates to a sharp, scathing exploration of race relations, leaving theatregoers' mouths speechless and their minds racing. Read More 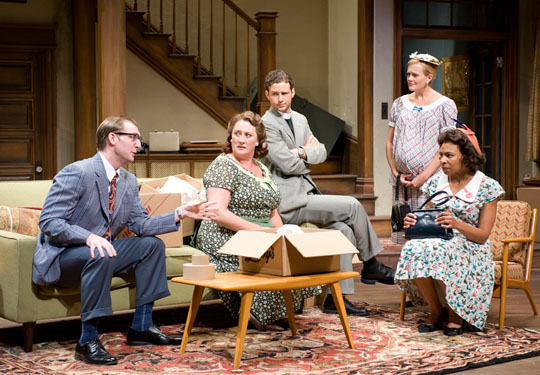 en route - Chicago Shakespeare TheaterNo seats. No programs. Just a cryptic text message, a series of verbal and visual clues and Chicago as you'd never seen it before. Combining performance art with self-discovery, the Australian troupe One Step at a Time teamed up with Chicago Shakespeare Theater to create a grown-up treasure hunt where the rewards were far beyond physical. Armed with an iPod full of city-friendly tunes and poetic musings on each locale, each participant became fully immersed in a unique encounter with an urban fairyland. Those who experienced en route were reluctant to describe exactly what they did (so as not to ruin the surprises), but overflowed with how it made them feel. Read More 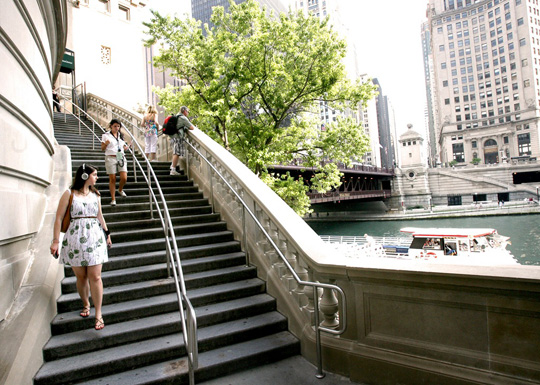 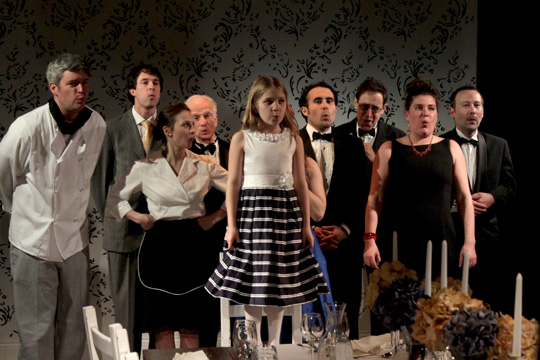 Follies - Chicago Shakespeare TheaterChicago Shakespeare Theater attracts the creme de la creme of performers and technicians, and its flawless revival of Stephen Sondheim's lost classic brought it's A game to the final haunting note. Even Sondheim naysayers were loath to find fault with the musical showgirl reunion on the eve of a Broadway playhouse's destruction. Enhanced by Virgil C. Johnson's glorious costumes and Alex Sanchez's pristine choreography, Follies' stunning production numbers ran the gamut from old-fashioned entertainment (Marilynn Bogetich's "Broadway Baby"), a vaudeville-style probe of the human psyche (Caroline O'Connor's "The Story of Jessie and Lucy") and a stirring tale of survival (Hollis Resnick's mind-blowing rendition of "I'm Still Here"). It disappeared from the stage for decades, but thankfully, Follies survived. It's still here. Read More 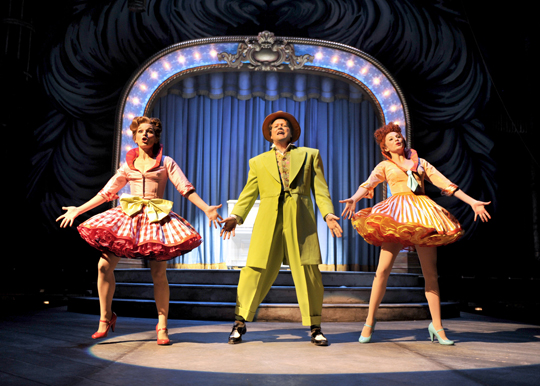 The Homosexuals - About Face TheatreWith the simplest of production values and a score of top 10 hits, Chicago playwright Philip Dawkins' moving ode to sexual identity and friendship concentrated on emotion-packed writing and a strong cast – a wise choice. Traveling back in time from a 2010 breakup to a 2000 party, The Homosexuals encouraged its audience to -- paraphrasing late Rent scribe Jonathan Larson --measure their lives in love. As small-town transplant Evan learned, platonic relations can quickly turn sexual, attraction can't always be explained and everyone enters one's life for a reason. Dawkins' articulate dialogue examines career challenges, family relations and fidelity with the intellectual grace of a writer to watch. Read More

An Iliad - Court TheatreWar is hell. So can be Homer's epic poem communicating that message with many, many more words. But with director Charles Newell at the helm, the Court's vigorous adaptation was a game-changer. Using a dynamic cast of one (Timothy Edward Kane), Newell scrutinized the heady tragedy of combat with blunt force and authentic brutality. An Iliad's audience was initially sucked in and ultimately wrung out by the edible language, disturbing action and manic sensations. The journey of gods and monsters was never more intense – and never more groundbreaking. Read More 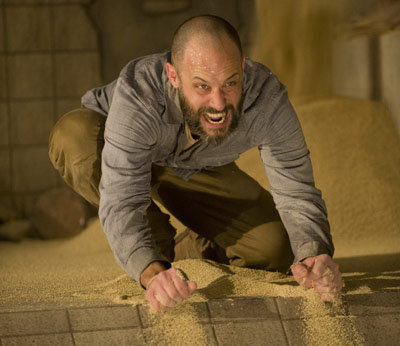 An Iliad, Photo by Michael Brosilow

Jackie & Me - Chicago Children's TheatreMagical realism is difficult to execute with genuine pathos rather than manufactured treacle. Jackie & Me accomplished the former, using time travel as a seamless segue into a passionate portrayal of the beloved American sport and the history-making athlete who broke down racial barriers. What could have been an utterly silly device – a young boy's ability to meet the player on any baseball card he holds in his hand – transitioned into a dynamic story thanks to warm and empathetic performances by Tyler Ross as the boy and Kamal Angelo Bolden as Jackie Robinson. A triumph of the human spirit and an entertaining evening for kids and adults alike, director Derrick Sanders' production hit a home run. Read More 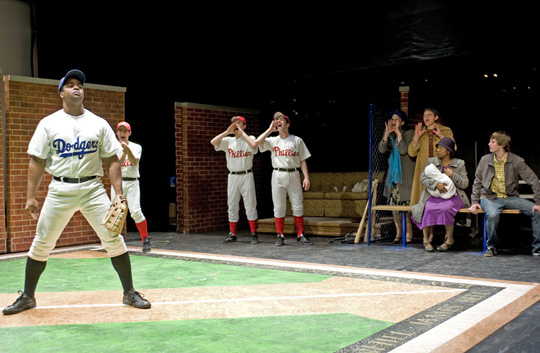 Jackie & Me, Photo by Michael Brosilow

Momma's Boyz - Teatro VistaTold in reverse chronology, Teatro Vista's chronicle of brotherly love and filial tragedy defied easy urban drama stereotypes to create a fully realized character study. The three central players weren't paint-by-numbers gangbangers, but complex individuals doing what they could to survive in their impoverished, violence-ridden environment. They played pranks. They dealt drugs. They murdered one of their own. Thanks to Candido Tirado's beautiful writing, Ricardo Gutierrez's sure direction and a trio of top-notch performances by Steve Casillas, Jessie David and Marvin Quijada, these characters were achingly real. Read More 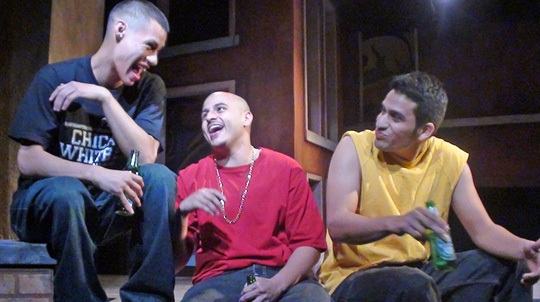 Porgy and Bess - Court TheatreFor the Court's revival of George Gershwin's operatic tragedy, director Charles Newell trimmed the cast, minimized the set and stripped the music bare. The result: a powerful ode to doomed love and a skillful presentation of an American composer's magnificent opus. Designers John Culbert (set) and Jacqueline Firkins (costumes) used shades of white to craft a weathered yet optimistic tone, and the lusty, majestic notes of the ensemble -- led by Todd M. Kryger and Alexis J. Rogers in the title roles, and music direction by Doug Peck -- lovingly illuminated the insurmountable challenges of the intricate characters. Porgy and Bess, impossible to present? In the words of the charismatic Sporting Life, it ain't necessarily so. Read More 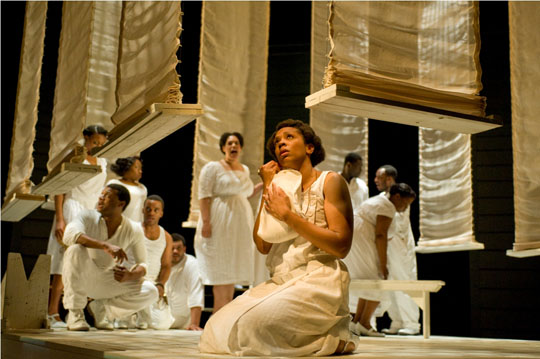 A Twist of Water - Route 66 Theatre CompanyRoute 66's world premiere was a seamless blend of snarky humor, true vulnerability and a touching love letter to Chicago. A collaboration of playwright Caitlin Montayne Parrish and director/co-creator Erica Weiss, A Twist of Water knew just when to challenge, when to hold back, when to joke and when to let loose. Gorgeous monologues interspersed with thoroughly realized scenes took the audience on a fully realized journey of a father and daughter whose happy family was ripped apart by a fatal accident, then slowly stitched back together with the help of a sympathetic colleague and the girl's birth mother. No man, woman or child is an island, and A Twist of Water emphasized the magnitude of kindred souls in the face of trauma. Read More 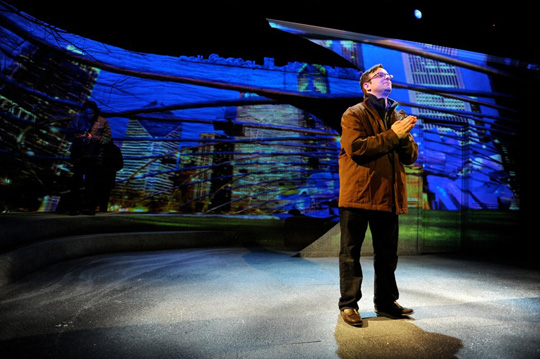 A Twist of Water, Photo by John Boesche