Instead of bogging down Durban last week in a bureaucratic roundabout of denial and delay, negotiators at the United Nations Climate Change Conference should have jumped a cargo plane to the Inupiat village of Kivalina, on the far reaches of Alaska.

Thankfully for us, and the world, science author Christine Shearer made such a journey in 2008, and her extraordinary chronicle of a native Alaskan village's demise and inevitable relocation due to climate changes, a breakthrough lawsuit for accountability, and the harrowing legacy of misinformation and deceit by multinational corporations, ranks as one of the most timely and important books to be published in 2011 -- and in the past decade.

Written with the verve of an investigative journalist and the insight of a scholar, Kivalina: A Climate Story should be required reading for all power brokers in the climate change debate -- in particular, President Obama and his special envoy for climate change Todd Stern, and the dawdling U.S. Congress and its embarrassing numbers of climate change deniers. 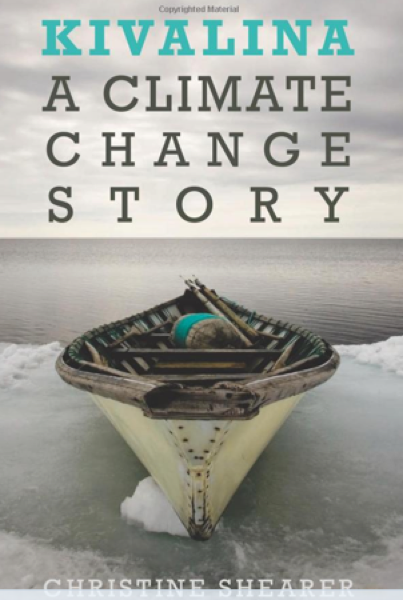 But Shearer's book also presents an important cautionary tale and wake up call for all Americans: "Although climate change is often discussed as an environmental problem, its root causes are social." And its consequences, as Shearer expertly unfolds through the lives of the Inupiat villagers and their advocates, are not simply accidental or part of an uncertain forecast, but a present-day calamity and humanitarian crisis that foreshadows our future.

There might not be a better strip of land to demonstrate the reality of climate destabilization than the barrier reef of Kivalina, between the Chukchi Sea and the Kivalina and Wulik Rivers, where receding sea ice formation has led to erosion and flooding, and literally placed more than 400 indigenous villagers on the edge of survival:

Standing on the tiny island, only a few feet above sea level, we were completely surrounded by water. Janet walked me toward the Chukchi Sea. The western side of the island was a mess of bulldoxers, trucks and construction workers, working tirelessly to expand the shoreline, which was steadily eroding. The southern end was being armored with a seawall made of large rocks, and sandbags were spread about ground.

Providing a historical background and investigation of changing climatic conditions, the rise and role of fossil fuel industries and increasingly misleading corporate campaigns of denial, Shearer places the Kivalina village on the frontlines of both the global warming crisis and the grassroots efforts to halt our world's destabilizing slide into a point of no return.

In 2008, she writes, the tiny Kivalina village made a dramatic move:

"... and filed suit against twenty-four fossil fuel companies for contributing to the village's erosion through large amounts of greenhouse gas emissions, and for creating a false debate around climate change. The lawsuit was filed in conjunction with environmental justice and indigenous rights organizations as one of several steps in a broader push for climate justice, aiming to help Kivalina residents draw attention to their situation and call for action from government and corporate officials that had so far largely ignored them."

Drawing on interviews with Kivalina residents, lawyers and government personnel, and an analysis of legal and government documents, Shearer provides a groundbreaking and riveting read on the dangerous role of corporate power and politics in one of the most important issues of our times.

Two weeks ago, the Kivalina residents and their attorneys brought their case before the Ninth U.S. Circuit Court of Appeals in San Francisco.

"Defendant companies argue that climate change is not a matter for the courts -- the problem is too big, and we are all responsible," Shearer noted in an article for The Conducive Chronicle. " Yet we have not all embarked on multi-million dollar campaigns to fund our own research and prevent change. It is these secondary claims that could be the crux of establishing whether fossil fuel companies will eventually bear liability for harm from greenhouse gas emissions."

No matter who bears the responsibilities, the Kivalina residents and their devastated homeland are a reminder of who is paying the price for the denial of our own future.