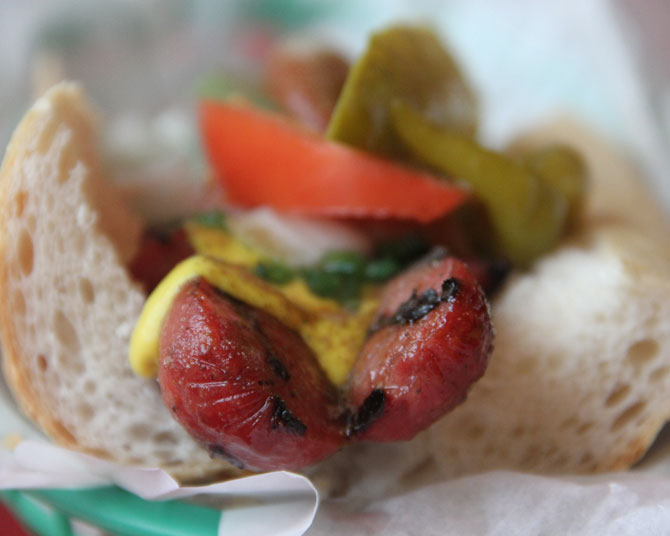 Hamburger America. The United States of Pizza. Where the hell is Hot Dog Nation? Why hasn't anyone written that book?

Listen, as a kid who grew up adoring New York's skyscrapers, energy and especially its iconic foods, there were some tough concessions to make when I realized Philadelphia had better pretzels (by far), and that the world's best pizza was in Naples.

So imagine the pain when, after years of watching the Bulls beat up on the Knicks, I realized that despite Gray's Papaya, and all the city's hot dog carts, that not only was New York City not a hot dog town, but that it wasn't even in the conversation when it comes to Chicago's hot dog scene. It's particularly galling considering all that Nathan's, a New York original, has done during its long history, to popularize the hot dog.

In pictures: America's 20 Most Gluttonous Cities

The sad thing is, despite being home to the July 4th hot dog eating contest, and even with some decent efforts by places like Crif Dogs, one of New York City's best hot dogs is Shake Shack's Shack-Cago dog, an homage to Chicago. A weekend gorging on dogs in Chicago, a short tour of the great hot dog places in Connecticut (at right, the Weenie Wanderer ballad on the wall at Rawley's), a visit to Pink's in Los Angeles, just one of these experiences is a hot dog culinary awakening. Heck, eating an airport hot dog at LAX is better than any hot dog in New York City. An airport hot dog for the love of all things sacred and holy!

Sure, there are some gems, lesser-known places like Bonanza's, which has been in business since 1897, but when it comes to hot dogs, New York City actually doesn't measure up to many places across the country.

The interesting thing about many of these superior dogs is the geography involved in their names. There's the Cheese Coney from Cincinnati and the Coney Island Dog in Detroit? Coney? As in Coney Island, Brooklyn? "What's that doing being the name of a dog in Ohio?" you're asking. It's the same situation with the hot dogs at Coney Island Lunch in Scranton, P.A.

"Okay," you'll counter, "New York at least has some heritage to offer when it comes to hot dogs. Nathan's made them famous. So it's an homage thing." Well, why is the naming geography so confusing when Nathan's and Coney Island have nothing to do with anything? Consider the Michigan Dog available in Montreal, Quebec, and Upstate New York. Or the "New York System Hot Wieners" available in Rhode Island. But then, these are the eternal hot dog questions.

Wherever you're from, and however you grew up eating hot dogs, if you're a true lover of this genre you'll appreciate other variations. So, it's time to bow down to Hot Dog Nation with a look at some of the amazing regional styles of hot dogs and iconic wieners that can be found across the country. For details about buns, franks and toppings, you'll want to click through the full slideshow that includes more than 30 hot dogs.