If we made a list of the most popular food in each state of the United States, we'd see many of the same items crop up on each state's list -- probably burgers, pizza, and ice cream. But if we dug a little deeper, we'd find each state likes certain foods way more than rest of the country does.

In my part of the country (New Hampshire and Vermont), we like our maple syrup. In Maine, they like lobster. I hear that down in Texas they enjoy something called "barbecue." Now, just because lobster is a distinctive food for Downeasters, it doesn't mean that lobster is the most consumed meal in Maine -- it's just preferred way more there. In Maine, you are certainly more likely to eat a lobster bake than in Texas.

Just as different regions like to eat different foods, they prefer different music, too. Yes, people everywhere listen to Jay-Z, Macklemore, and Daft Punk -- it's just that some artists are played far more in certain parts of the country than in others. I set out to learn a bit more about these regional listening preferences. My goal was to find the musical equivalents of maple syrup for Vermont and barbecue for Texas.

To do this, I looked at the music listening behavior of a quarter million online music listeners from a wide range of music services powered by music intelligence company The Echo Nest (my employer). First, I created a chart of the top artists in the entire country, and another of the top artists in each state. Then, I went through the chart for each state to find artists that have the biggest bump in their rank on the state chart, when compared to the national chart. These are the most "distinctive" artists for that state -- the ones that people there like way more than people in other states do.

Finally, I built a map depicting the most distinctive artist for each state, which attracted quite a lot of attention this week: 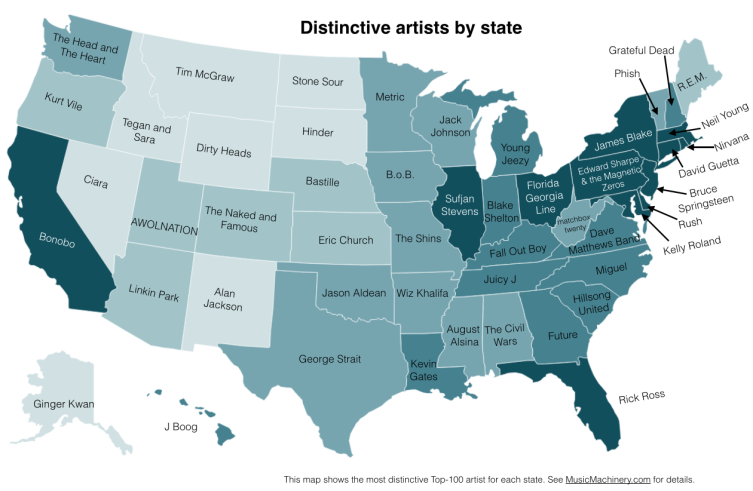 The map shows us that the musical equivalent of maple syrup for Vermont is Phish (no surprise there), the South likes country music, and The Boss still claims a special place in the heart of the Garden State. We can compare these distinctive artists to the below map, which shows the most popular artist in each state: 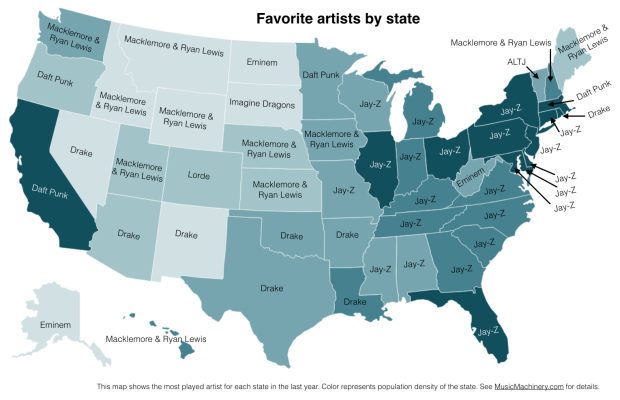 The top map shows a single distinctive artist for each state, but of course regional preferences vary far more richly than by a single artist. To get better view of the regional listening preferences, I created a website called Regionalism in U.S. Listening Preferences that makes it easy for you to explore how music taste varies from state to state.

As one example, this website can tell us the top 10 most distinctive Texas artists when compared to New England:

Artists listened to far more in Texas than in New England 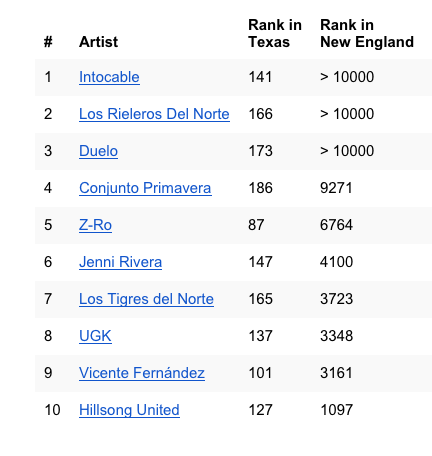 Paul Lamere is Director of Developer Platform at The Echo Nest and author of the blog Music Machinery, where a version of this post first appeared.