The compelling new documentary, Best of Enemies, centers around an extraordinary series of debates between William F. Buckley, widely considered the intellectual godfather of the conservative movement, and Gore Vidal, the prolific leftist novelist and polemicist (and cousin to Jackie Onassis).

Best of Enemies is nostalgic, timely and surprisingly relevant. In the summer of 1968, political debate and television news changed forever. The Buckley and Vidal debates riveted viewers and revived a dwindling television network, giving rise to a new era of public discourse: punditry.

Bill Buckley graduated from Yale just before I entered as a freshman, and his essay God and Man at Yale was much discussed. It was a radical book, perhaps the most notable, intellectually respectable, challenge to the liberal consensus of the time. I might be dating myself, but I remember the 1968 election vividly. The image of Chicago police beating protesters at the Democratic convention is indelible. It was a period of dramatic civil unrest, some driven by racial tensions, but more by stark differences over the Viet Nam war.

The Nixon/Kennedy debates in 1960 were the first televised presidential debates ever. Politicians were just beginning to learn how to use the medium. Network television dominated the airwaves, and CBS, NBC and ABC all adopted broadcast strategies to cast the widest net, appealing to the largest group of viewers they could (and alienating as few as possible). If you got your news on television, you were driven toward a bland, centrist, consensus.

Among the titans, ABC was the least popular and least funded network. To compete during the 1968 conventions, it took a risk with "unconventional convention" coverage. It may have marked the dawn of pundit television as we know it today, but these were no ordinary talking heads. ABC successfully presented sharply drawn contrasts between liberal and conservative world views, but did so through the unabashedly elitist, baroquely articulate, locutions of Buckley and Vidal. 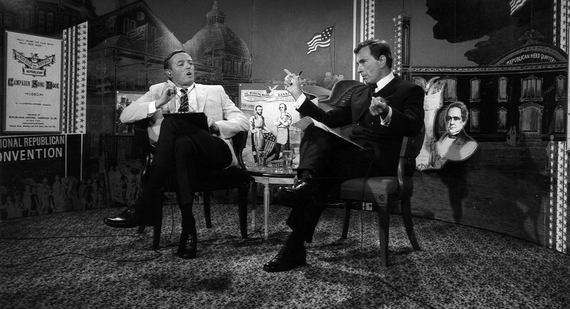 Today, with a multiplicity of cable outlets and other digital media, the strategy for television networks has changed. No longer do they seek universal appeal; rather they attempt to establish a special rapport with a specific audience. Fox News targets conservatives; MSNBC targets the left. Online media outlets often personalize their content so that each viewer sees news or opinion consistent with their preferences. It can be rare indeed to encounter the other side's point of view in today's digital "echo chambers." This phenomenon tends to push public opinion toward extremes and promotes reflexively ideological and toxically emotional points of view.

The evolution in media reinforced a tendency toward polarization in politics, as Democrats and Republicans alike are driven towards extremes by the minority that vote in primaries. This is further exacerbated by gerrymandering, which has made 90 percent of congressional seats "safe" so that general elections are a foregone conclusion and the contest that matters is the party primary.

Against this backdrop, Intelligence Squared U.S. Debates was launched. The program brings rigorous, fact-based public discourse back to America's airwaves. With a series of robust, Oxford-style debates, its goal is to restore civility, reasoned analysis and constructive public discourse to today's political landscape. Between podcast subscribers, public radio listeners, and those engaged online, the Intelligence Squared debates demonstrate that there are millions of Americans with an appetite for public policy issues, a desire to consider both sides, a willingness to change their minds, and an attention span for extensive discussion. Best of Enemies celebrates the dawn of intellectual debate in mass media. Intelligence Squared U.S. celebrates its continued relevance.

What Buckley and Vidal did for discourse in America was unprecedented. They reluctantly met on camera to debate the political issues of the day. Even though they believed each other's political ideologies were quite dangerous for America, they agreed to this series of debates. Perhaps the issues that divided them were not explored in depth. And, yes they "pummeled out policy and personal insult, with explosive exchanges devolving into vitriolic name-calling," as the film describes, but it was real. It was unscripted and authentic. Together they proved there was a time not so long ago we relished hearing both sides of political arguments. And there is a time -- call it the present -- when a hunger for authenticity seems to be driving both parties in unexpected directions.