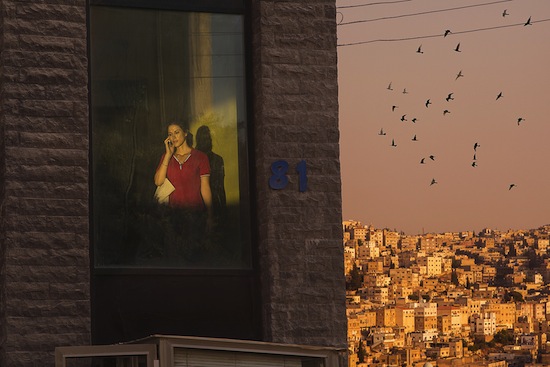 My journey through films has often taken me on a search for a place where my own issues of non-belonging are best explained. Cherien Dabis' film Amreeka was one of the most meaningful stops on that voyage, because while her story dealt with a Palestinian woman (Nisreen Faour) immigrating to the US with her son only to be faced with a mixed American dream-slash-nightmare, the feelings within Dabis' story felt very close to my own experience. It's no surprise I awaited her next feature May in the Summer with bated breath.

Presented in the "Venice Days -- Giornate degli Autori" sidebar at this year's Venice Film Festival, May in the Summer is everything that I'd hoped it would be: profound, passionate, funny, romantic, empowering -- the perfect half to the "diptych" Dabis admits she began with Amreeka, hinged by their common theme of "Otherness" and displacement. But where Amreeka dealt with the Arab-ness of Faour's character as being "the Other," May in the Summer brilliantly shows the challenges of being American, even Arab-American, in the Arab world.

May in the Summer also stars Dabis as the lead character May, with beloved actress Hiam Abbass playing the silently, and sometimes not so silently opinionated mother, Nadine Malouf and Alia Shawkat as May's sisters and a cameo by favorite romantic hero Alexander Siddig, as Ziad.

I sat down with Dabis on a balmy afternoon on the Lido. Our talk felt more like catching up with a girlfriend than an actual interview and that's because Dabis is never the filmmaker, or the movie star, opting instead for the more challenging role of being a real woman.

Do you think a film like May in the Summer can help to bridge cultures because it shows that a family in Amman, Jordan experiences the same problems, faces the same basic human issues that we can find in Rome, Chicago or Berlin?

Cherien Dabis: Absolutely. I think that's definitely one of the goals and I think that for me as a filmmaker it's been my obsession -- in my first film and this one as well. I think to be Middle Eastern is to suffer from daily heartbreak. With everything that's happening in the Middle East, and the fact that it continues to get worse, I choose to show something else in my films because we already see so much of the suffering. I want to show another side of who we are and that side is family and love and culture and celebration of those things.

You carefully deal with displacement in your films, you're never heavy handed. You yourself are of Palestinian heritage but born in Omaha, Nebraska, and grew up going back and forward to Jordan. How do you personally bridge both cultures? Because you really, truly have one foot planted in your American-ness and one foot in your Arab-ness, undeniably. And to one or the other side, each is always "the Other".

CD: I think through my films. Listen, I suffered a major identity crisis through most of my life and I think that compelled me to become a storyteller, and also compelled me towards self-expression, even before I became a storyteller. Because I was always feeling misunderstood in one regard, the warring halves of my identity were very confusing and I did always feel like I needed to build bridges between the two, in as simple a way as explaining my American life to my Arab relatives and explaining my Arab life to my American friends. I even picked up a video camera when I was 12 to videotape where it was I went every summer when my family took my sisters and I to Jordan, to Amman, in order to say "look this is actually what it's like".

Why is the dialogue in May in the Summer almost entirely in English, and not Arabic?

CD: I've gotten that question a lot. A very valid question but the reason is -- and I always planned for it to be more English language than Arabic -- because the three sisters are American, and the experience of the movie is about the experience of being American in the Arab world. So in Amreeka it was the Arab identity that was emphasized, because that was the "Otherness" and in the Arab world it's the American identity that's emphasized because you are seen as a privileged Arab-American. So emphasis on the American, even though you may not feel that American... May of all of the sisters probably feel least American, she speaks the most Arabic while the other two barely speak it at all. And I wanted to explore in part the trend of the immigrants who are leaving the US and returning to their home countries as this is happening more and more. Do you still live in the US?

No. I returned home.

CD: There you go! And so did my mother and three of my sisters who were born in the US and now live in the Middle East. I would consider moving to the Arab world as well. I feel very comfortable with a foot in both worlds. I'm actually considering leaving the US for Europe to experience another place. And I feel that what's happening, with the decline of the US as this superpower, the American dream is dying.

I read somewhere that when you were a child you would go to sleep praying that you'd wake up with blonde hair and blue eyes.

CD: That was when I was much younger, that's how keenly aware I was that I was very different from where I grew up. I definitely don't feel that way now, I think I outgrew that.

That has to be a double challenge, because you were born in the US, it's not like you could dream of "home". Omaha was home.

CD: Well home, that's difficult, because my parents had just immigrated and my mother was terribly homesick, really homesick I would say for the first five years. She was really homesick for the entire time she spent in the US which was 25 years. And a lot of these kinds of things you inherit. You inherit the melancholy, you inherit the nostalgia, you inherit the sense of suffering, you inherit a longing for home and you don't even know where that is, or what you're longing for. For me, I was very much given that, which added to the confusion of not knowing where I belonged, not knowing who I was, and what it was I was yearning for that I didn't have.

What were the inspirations for May in the Summer?

CD: The nugget of the idea came from wanting to tell the opposite story from Amreeka, wanting to explore the opposite cross-cultural experience. One that I'm again very familiar with. And also the inspiration of my sisters, I have four sisters and so the sister dynamic is one I know very well. And I think I was also inspired by the place, by Jordan and the uniqueness of Jordan and how completely Americanized Jordan has become and I've seen it become. It's really a remarkable place full of contradictions, ancient civilizations and pop American culture and Starbucks and McDonalds, nestled next to mosques, and bikinis and burqinis at the Dead Sea, and people partying poolside with Palestine across the water.

Three words that describe you?

CD: Oh, total wildcard. Wow, there's so many answers... You know I wrote something down recently and I'm feeling like I had this exercise. Or maybe they were things I wanted to be... I'm always looking to better myself. I want to say something around evolution. Drive, potential and purpose, three things that I think really define me at my core. But I have a lighter side too, this makes me sound so serious!