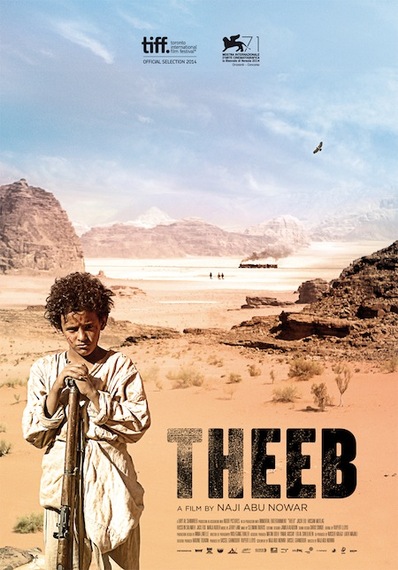 I had a very selfish craving for the film Theeb (which means "Wolf" in Arabic) to be good: I like the filmmakers and their crew. I've actually grown very fond of them in the last few days, thanks to a few magical moments spent in their company, in Venice. Also, Theeb is executive produced by Nadine Toukan, who has the Midas touch when it comes to film, it was funded by both SANAD (the funding arm of the Abu Dhabi Film Festival) and the Doha Film Institute -- two stand-up cinematic organizations in the Gulf -- and sold by Fortissimo Films, another personal favorite. Tie it all up with a great team of publicists I enjoy dealing with on a regular basis, and you've got a perfect package.

But then a film has to be good. No wait, it has to be great! And there is nothing worse than watching with big expectations, only to be disappointed. Thankfully, Theeb delivers, in every way, on every level, to every part of me. It is a spectacularly epic film with a wonderfully intimate human story. It possesses everything that allows me fall in love with cinema, again and again.

Theeb takes place during World War I, in a forgotten corner of the Ottoman Empire. It is 1916, the start of the Arab Revolt, the years of that infamous T.E. Lawrence, but please don't compare Theeb with that other film. It is in no way shape or form a modern-day Lawrence of Arabia. There, I've gotten that out of the way. Now onto what Theeb actually is.

Theeb is a jewel, deserving of its Orizzonti Award for Best Director prized to Naji Abu Nowar in Venice and more. It is a film about the vastness of a desert -- in the story the Arabian Desert, in truth the Wadi Rum in Jordan -- the strength of a child and the beauty of the culture of the Bedouins, who not only survive within their harsh environment, but thrive and continue to amaze.

But Theeb is also the kind of film that grabs a hold of you and doesn't let go. After an intimate screening in Venice, I could smell the desert and taste the grittiness of the sand under my teeth. I wanted to meet Theeb himself, played subtly and powerfully by Jacir Eid, scuffle with The Stranger, the charismatic Hassan Mutlag, and learn life from Theeb's brother Hussain, in real life the kind Hussein Salameh. I did, well meet them anyway. And also Eid's father Abu Jacir, who is a guide in the Wadi Rum. They'd all come to Venice, to support the film, as did scores of others from the Jordanian crew, making Theeb's world premiere an affair to remember. For that night, Venice belonged to the Bedouins. Hail to the power of cinema!

I sat down with Theeb's director Naji Abu Nowar and co-writer Bassel Ghandour for a chat, another favorite moment at this year's Venice Film Festival, before the film continued on its heart-conquering journey to the Toronto International Film Festival and BFI London Film Festival.

You've had the seed of the idea for Theeb for years, that's what Nadine Toukan, your executive producer said? 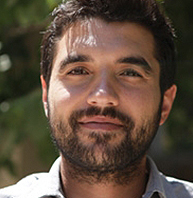 Naji Abu Nowar: I'd always wanted to make a Bedouin Western. In 2003, the first thing I ever wrote was a [Sergio] Leone-isque one but it was awful. Basically copying Leone. It was something in the back of my mind but really Bassel's story presented the key for me of how it might blend. And then it was really about listening to the Bedouins. Their code is in the film and so it was about listening to their story and developing the story together. And that's where I think the film that you see in the cinema came from.

It's clear that the Bedouin prospective, their voice narrate the film. How did you achieve that?

Bassel Ghandour: At no point did Naji or I ever think that making this film, or writing a story like this could happen without consulting or sitting with or really spending long periods of time with the Bedouins. And living that life, having them inform the story. We just came up with the concept and the idea, but we've always known that for this to be a successful film, we needed to go down there and have their voice tell the story. We understand story structure, cinematography, so we bring those elements. But ultimately, Naji always talks about how the Bedouins have an oral storytelling culture. So we took that and we let that inform the basis of the film, then we brought in what we know how to do.

Who is your Director of Photography, and how much of a voice did he have in this film?

Naji Abu Nowar: He had a huge voice. His name is Wolfgang Thaler. Obviously we needed someone who is a great DoP, but we also needed someone who is used to filming in very difficult environments, has a respect for different cultures and the ability to behave respectfully and to get on with people. We also needed someone who could work with very little grip equipment, because we couldn't get it into the desert. And also because we were working with amateur actors, we needed someone who could capture the performances of the film live. From my standpoint as a first time director, living in Jordan, never being able to touch a film camera, I needed someone who really knew what they were doing and would be able to help me out as well. And have patience. Wolfgang has been all around the world, worked with different cultures all around the world, he's an expert in film -- he just had everything. And then when I met him, he's such a wonderful person, and the Bedouins love him, because he loves tea and the Bedouins, their blood is tea! They trusted him. And he'd go climbing and stuff, they just really respected him and really loved him.

Bassel Ghandour: Wolfgang was a teacher. It wasn't just Naji's first film but our first feature, as a core team. He's a patient guy, who is used to working with students so he would come down and we would sit and discuss how we would shoot a scene. And it would be a dialogue. These are the rules and we have to abide by the rules; this is a first person film, it has to be always from the POV of Jacir, the boy. How would he see this scene? Would he understand this or not understand it? So it was really important that the things that Jacir didn't understand, the audience is also confused and lost by. And sometimes the situations are simplified just because it is a young boy looking at the world.

Naji Abu Nowar: The flip side is, with all that, Wolfgang has no ego. If I said to him, "Wolfgang, I really want to do it like this," he would just do it. That's so important, especially for a first time director, that you're not bullied.

Apart from what you mentioned above, what else in the film is a Bedouin creation?

Naji Abu Nowar: Unfortunately you don't speak the language, but we developed the dialogue with the Bedouins. So we had an idea of how we wanted the scenes to go, and the dialogue they came up with is so wonderful. I would never ever be able to write that. We'd sit down every night and we'd go through a scene, and whoever was in that scene would be with us. And then we'd write down, in their language, what the dialogue was.

Bassel Ghandour: The great thing is, they understood subtext, and nuances and subtleties. By the end of it, Naji and I were just writing and listening.

In my writing I often explore the idea of "the Other", understanding and embracing what is different from us. What is the power of a film like Theeb to help bridge the divide?

Bassel Ghandour: Like you said, it's an intimate story set against a really grandiose backdrop. Of WWI and the Arab revolt. Intimate films like this one get you to see the other side because you all of a sudden see the victims, however indirect, of polarized political stances. Or whatever stances. In this case it being the Ottoman Empire aligned with the Germans and the English. I think it brings people together because you naturally feel empathy when you see the victims of two political powers fighting, and the majority of those who are innocent end up being displaced, marginalized and affected. These human stories are important.

Naji Abu Nowar: I think that's what you are talking about and what I'm hoping will happen, is that people will identify with the boy. And once you do that, you've crossed that boundary. Once you are with the boy, he's no longer "the Other" and it helps in a POV film. The next one I hope to work on I'm looking at something like that with what is going on in the world today. Because it is getting crazier than normal. It's always been crazy but now it's even more crazy.

Naji Abu Nowar: Even within what is going on in the Arab world now, we're facing this kind of fascist, unbelievably horrific movement that's occurring. Now more than ever it's becoming quite scary. To get our stories out there, and hopefully stories that people can identify with, is really important. It's important for the kids. Just the act of cinema itself and not banning cinema, or outlawing cinema, is crucial. The fact that there is art. And the important thing is not art as stuff no one wants to watch, films that people can watch and accept.

Images courtesy of DDA and ADFF, used with permission.