In 1999, "Shakespeare in Love" picked up seven Oscars, beating out Steven Spielberg's World War II epic "Saving Private Ryan" for Best Picture. It also earned a place in history as one of the worst Best Pictures of all time — according to user ratings on IMDB, where it holds a 7.2 out of 10.

There's nothing wrong with a 7.2 rating, but most Best Picture nominees and winners have scored higher, especially since the 1990s when average winners' ratings have consistently stayed over 8. 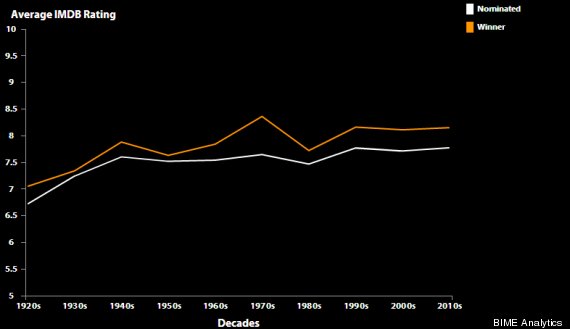 Chart courtesy of BIME, a cloud-base business intelligence tech company. You can interact with their Oscar dashboards here.

Here are the 12 "worst" Best Pictures of all time, according to IMDB rating. "Crash" became one of the more controversial Best Pictures in recent memory when it beat "Brokeback Mountain" in 2006, but it has a 7.9 rating and did not make this list.

CORRECTION: This slide show previously included "Broadway Melody of 1936," which did not win Best Picture.