As we bobbed in the warm cerulean sea off the coast of the Dominican Republic, a stately row of palm trees on the beach our only companions, we couldn't help thinking about how misguided Christopher Columbus had been.

He literally came upon the island, which he named Hispaniola, more than 500 years ago on Christmas Eve in 1492, when his ship, the Santa Maria, ran aground and sank offshore. (The Dominican Republic is one of the two countries that comprise Hispaniola. The other is Haiti.) 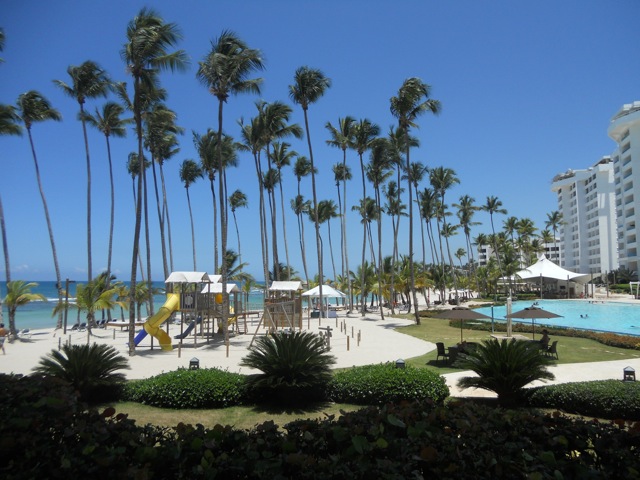 Of course, indigenous people were living here quite happily long before Columbus "discovered" them. And why wouldn't they be happy? Columbus reported that this was "the most beautiful land that human eyes have ever seen." His journal describes the splendor of the high, forested mountains and large river valleys, inhabited by peaceful, amiable people.

Somewhere along the way, though, things went sour. Columbus and his crew also discovered that the island was not rich in gold, silver, and other items they coveted.

They lost interest in this island, except to use it as a base to explore the rest of the "New World."

They failed to see that what's really valuable is the land itself.

Today, just as we're doing, tourists from around the world come to play on the gorgeous sun --swept beaches that rim the island, hike to the waterfalls in the mountainous interior, and explore the oldest colonial city in the Americas.

Thanks to tourism and agriculture, the Dominican Republic's economy is the largest in the Caribbean. The island is so huge and with such elevation extremes that a diversity of crops can be grown here in the year-round temperate climate. That keeps food, rum, and tobacco prices down. Tourists like that, as do the growing number of foreigners coming here to retire, start businesses, or buy an inexpensive seaside vacation home.

Real estate prices, too, are among the lowest in the Caribbean. And rental yields are good... thanks to new international airports and the ever-growing number of tourists.

We toured a new, three-tower condo project with a restaurant and large pool right on one of the country's most popular beaches -- less than 90 minutes from two of those convenient international airports. (You can be in Miami or in New York in just three hours.)

The two-bedroom/two-bath condo we found is first-rate... with pretty tile floors and granite countertops, and a large terrace perfect for dining. The price is $230,000 and the view of the ocean and the wide sandy beach right outside the door is, as they say, priceless -- especially considering that a free golf membership is part of the deal and all the services you need are close by, including restaurants, grocery stores, even a medical clinic with English-speaking doctors.

So what do you think? Did Columbus miss the boat? He surely didn't see the true value of this beautiful island...