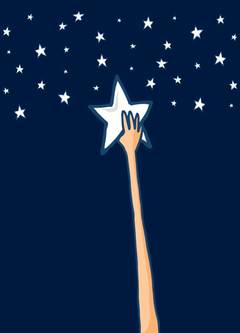 Deciding you're ready to publish is a huge deal; it's also the point where you hand over control to someone else, putting the power in the hands of an agent, an editor, the universe.

Most writers have traditional publishing aspirations. They want an agent to fall in love with their project and champion their work; they're looking for the external validation of being accepted by a publishing house; their fantasies about getting published involve a red carpet experience that's increasingly elusive in this industry.

I get it. Who wouldn't want what traditional publishing, at its best, offers its authors: an advance, a built-in team; a publicity campaign. So yes, go for it, by all means, but also be vigilant, self-advocating, and savvy during this process, and remember that publishing is not always at its best. It's easy to get delusional while shopping your book, hoping for the bite from an agent or editor that will change your life. It's also easy to be self-berating, and to get anxious or depressed. So beware, and practice self-care by following best practices and setting firm limits:

Shopping to Agents
Limit the number of agents you sent to at any given time to 20. Follow up after two months. If they don't get back to you, they don't want to represent your project. Move on. Remember that agents only get paid when they sell your book. They have a trained eye toward what publishing houses want, and they represent projects that they think they can sell for significant money. Consider that a $5,000 advance garners an agent a measly $750 (15% commission). No matter how much they might love your book, they're financially motivated and they sell books for a living. Agents vary in terms of responsiveness. Some get back to every author. Some are straight-shooters, telling you flat-out: "I don't think I can sell your book." Others will use euphemisms, dodging the conversation about how ridiculously competitive the book industry is, saying things like: "I didn't connect with the project as much as I hoped I would." It may be important at this point to get an assessment of your work. Is it really publish-ready? If you know it is, and especially if you're getting compliments from agents, or regretful rejection letters, it's likely agents can't take you on because of your lack of author platform. If it's incredibly important to you that you get an agent's representation, you might have to revisit your book or your platform or both. If it's more important to get published, move on to Plan B.

Shopping to Publishers
I encourage writers with niche or non-commercial projects to shop directly to publishers, bypassing agents (though some want or need to go the agent route first). The process is the same. You simply send your query letter to editors instead of agents. Bigger publishers will not accept unsolicited queries (meaning they have to be agented), but there are many small- and medium-sized publishers looking for projects, who want to collaborate with savvy authors who don't necessarily need to be celebrities. My advice to those of you who shop to publishers is the same as above: Follow up after two months. If they don't get back to you, don't press. Move on. But cast your net wide here. Shop to as many publishers as you want to, until you feel you've exhausted all of your options. Where the agent pool is plenty big, they all have to sell to the same very small pool of publishers who still pay advances. If what matters most to you is a good fit, to land with a house that champions your work, then these deals are out there, though the process requires a lot of tenacity (and you still need an author platform). Note that a zero advance offer should give you leverage to negotiate higher royalties, and maybe even to ask for some monetary support from the publisher for your marketing and publicity, but you shouldn't expect this. Decide in advance how long you're willing to pursue this path (I recommend no longer than one year), and do your research. Only pitch to publishers who are a good fit for your book. Don't rule out university presses. And if you get an offer, be careful not to be so grateful after months of shopping that you forget to negotiate better terms.

Alternative Publishing Paths
The point at which aspiring authors step off the shopping path and embrace alternative publishing (hybrid publishing, partnership publishing, self-publishing) depends on their tolerance for rejection, their patience with the process, and their personal publishing ambitions. More and more I'm working with authors who are opting out of shopping their work altogether. They don't want to deal with traditional publishing and see the many upsides of publishing independently. (A few authors at She Writes Press have even turned down traditional deals in favor of an independent model.) Others come this decision as a last resort. For some, choosing to publish independently means giving up on a dream, or needing to work through what it means to them to green-light their own work. Alternative publishing paths involve paying to publish, so money is a big consideration here. Do you value your work enough to pay for it to see the light of day? Do you have a judgment about subsidizing your own work? Do you believe industry rejections mean your work isn't good enough? If so, you need to hear that it's no longer the case that manuscripts are rejected because they're not publishable, but instead because traditional publishing is contracting; because more and more books are being published every year; because authors don't have strong enough platforms; because a house has recently published something similar. Publishing independently allows you to create the experience you want. Hybrid publishers are increasingly operating a lot like traditional publishers--giving you a traditional house experience, with hand-holding, a built-in team, and traditional distribution. Self-publishing allows you to call the shots. You can hire agents, consultants, and coaches to guide you through the publishing process. Independent publishing is a blossoming middle ground for authors, and in many cases you can replicate the experience you always dreamed of having--though you pay for it instead of being paid for it. So you might also need to disassemble your fantasy to create a new reality. But with the life of your book being at stake here, it's worth doing the requisite soul-searching.

What was your publishing path? If you traditionally published, was it the dream you hoped for? Did you bypass an agent and sell your work directly to an editor? How did you go about doing that? Did you publish on a hybrid press, or self-publish? Are you glad you did?