They don’t call it a “case of the Mondays” for nothing. The first day of the week typically calls for multiple hits of the snooze button, extra cups of coffee and general grumblings directed at nothing in particular (or, everything).

But here at the HuffPost Partner Studio, we’re looking to change that.

We believe that Mondays should start off on the bright side. So we've partnered with Target to bring you our favorite stories, videos and feel-good campaigns of the past week that prove seizing every day, minute and moment truly matters. #MondayMatters 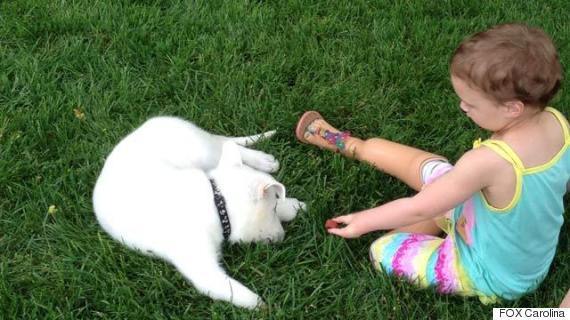 Puppy Love
It’s not uncommon for dogs and their humans to look alike -- in fact, it’s science. For one little girl in Greenville, South Carolina, her perfect match is a puppy missing his right front paw. Sapphyre Johnson, 3, was born with a condition that left her with missing fingers and required both of her feet be amputated. Johnson took extreme delight in adopting a puppy “just like her.”

Against All Odds
The Boston Marathon -- a historic event that draws thousands of elite and casual runners to test their endurance and mental fortitude along a challenging and hilly 26.2-mile course -- is a consistently inspiring event. But perhaps no runner was so inspirational this year as Maickel Melamed, who finished the course in last place after almost 20 hours of exertion. Melamed, who has muscular dystrophy, which severely impairs his mobility, said it was an honor to run the streets of the city.

Dance Dance Revolution
Alice Barker recently celebrated her 102nd birthday. Yet Barker -- who was a famous dancer in the 1930s, even dancing on the same stage as Gene Kelly and Frank Sinatra at times -- had never in all those years seen footage of herself in action. That is, until recently. Watch Barker fondly remember her past as she witnesses herself perform for the first time from her nursing-home bed.

Spotted, Sealed And Delivered (Home)
Drivers shouldn’t pick up hitchhikers, but when the guy looking to bum a ride is as cute as this, it’s hard to say no. Police officers in Northern California picked up a friendly sea lion pup early Sunday morning after it had somehow strayed from the ocean and was spotted along the Pacific Coast Highway. This pup was just one of thousands of seals returned to safety after getting separated from the coast this year ... but he was the only one who got to ride back in a police cruiser.

Target believes in better choices for all, whether that’s your morning read or what your family is having for breakfast. That’s why, together with HuffPost, they’re bringing you a roundup of the top feel-good stories. So, not only can you start your Mondays with better stories, but now you can shop better choices with the Made to Matter collection, handpicked by Target.