1956. Skagen. The northernmost tip of Denmark. This quaint little town, known for its geographical location in the middle of two great seas and its artistic heritage, is hosting a regatta with participants from several countries. One of the skippers is The Godfather of modern Swedish cuisine, Tore Wretman onboard his beatitful mahogany sailboat the Salta Marina.

The regatta is going well, and the Salta Marina is in a winning position. The crew can smell victory, and the atmosphere on board is cheerful. Plans are being made for a triumphant arrival at the banquet. The route they have chosen, far away from the rest of the pack, has proved to be ingenious.

Suddenly the wind dies. Completely. And with that, so does any chance of victory. As boat after boat passes on the horizon, the crew begins to doubt that they will even be able to make it into harbour in time for the banquet at all. The mood drops to freezing point within minutes.

Tore, ever the optimist, decides quickly that the only thing that can prevent a mutiny (okay, this was an amateur regatta, so it is doubtful that an actual mutiny was underway...) is to cook for his crew. After all, he is the owner of the beautiful Restaurant Riche in downtown Stockholm, and he is well known for his culinary skills, so if anyone can cook the mood back to normal it's him.

In the galley, he only finds a few fresh shrimps, some vendace roe, toast, butter, eggs, dill and vegetable oil. Not a lot. But it proves to be enough. He peels the shrimps, chops them up, chops the dill, whisks together a mayonnaise, fries the bread in a little butter and serves the whole thing as a toast topped with the vendace roe.

The crew digs in, and soon smiles begin to spread across the faces of the moments ago depressed sailors. The toast is a homerun, and the mood improves quickly. One of the deckhands asks Tore what this fantastic dish is called - he has never tried it before!

Tore has no idea what to tell him. But then he glances across the sea, and what was just recently way off in the horizon, the tip of Skagen is now finally getting closer. He smiles. - My dear friend, don't you know that this is the legendary Toast Skagen?

A couple of weeks later, Toast Skagen is introduced at Restaurant Riche, and the rest is history. Today this fantastic toast really is legendary. And it has a special place in the culinary heart of most Swedes.

Toast Skagen is essentially a shrimp toast, but there is one mythical ingredient that sets it apart from any other shrimp toast. Kalix Vendace Roe. This Swedish version of Russian or Iranian caviar is orange, light in taste, subtle and not as pushy as its eastern cousins. It's often served together with butter fried blinis or toast, some sour cream and very finely chopped red onions - as the star of the show. But in the Toast Skagen, it will have to settle with being the jewel in the crown. An orange colored precious gem, placed on top of this culinary treasure.

In my version of the Toast Skagen I have added a small amount of crème fraiche to the mayonnaise to make it a little lighter in texture and taste. But if you want to be completely loyal to the original recipe - just use mayonnaise. Also, there is debate as to whether or not dill should be a part of the recipe; Toast Skagen was initially served without dill at the Riche, but the original Toast Skagen made onboard the Salta Marina in the calm outside Skagen included a good amount of this wonderful herb. I personally think that dill is hugely important to lift the combined flavors and make this a true Swedish classic, but feel free to experiment! 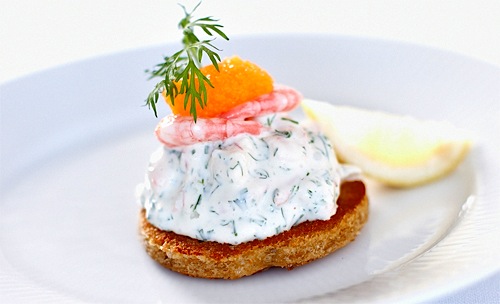 1. Chop the shrimps coarsley. Mix dill, mayonnaise, sourcream and lemon juice in a bowl. Add the shrimps and season with salt and pepper. Place in the refrigerator for at least 30 minutes.

2. Make round slices of toast bread and fry them in butter in butter until golden brown.

3. Serve the Toast Skagen in the middle of the plate. First the toast, then the Skagen mix and top the with the vendace roe. Garnish with dill and a slice of lemon