Dearest guacamole and hummus, they don't love you like I love you.

Becoming vegetarian isn't a mistake, it's just a missed steak. Although not eating meat is often perceived to be some sort of grand suffering, the vegetarian lifestyle should really be something of envy.

Although not all vegetarians are necessarily healthy, on average, refraining from eating meat has been linked to longer lives, with a recent study claiming a 12 percent longer average lifespan. All the more time to enjoy pasta and falafel.

Whether vegetarians really have "better sex" is up for debate, as it seems unlikely that any head of broccoli has ever come with sex tips. But eating red meat may lead to decreased libido and lower blood flow, which could contribute to erectile dysfunction. Sperm quality also might be better in vegetarians, although the study on this was conducted on monkeys.

It's extremely annoying when restaurants charge the same price for vegetarian options even when that means paying over $10 for just pasta with sauce. Keeping this in mind, it's a huge plus when places like Chipotle offer guacamole free of charge if you're ordering the vegetarian option. This should become standard practice, if you ask us.

When you don't have to store meat in it, your freezer can become exclusively a dessert container full of ice cream and popsicles. Everyone should be able to see the delicious benefits in this. Sure, vegetarians might also use the freezer for frozen veggies. That would certainly be much more practical, but why pass up on this opportunity for a dessert-only freezer when it just means encouraging you to get fresher produce that can stay in the fridge or on the counter?

The massive number of domesticated animals that have to be raised every year contributes to severe ecological problems including rising temperatures, the mismanagement/depletion of Earth's resources and the destruction of water supplies. The meat industry also uses up massive amounts of oil, as the process requires "more than eight times as much fossil-fuel energy than production of plant protein while yielding animal protein that is only 1.4 times more nutritious." On top of these things, the super-viruses caused by pumping mass-produced domesticated animals with antibiotics are also no fun.

In reality, we wouldn't recommend bothering to do this -- but it's sometimes nice to know that your lifestyle choices are this "controversial," for some reason.

"Just taste it!" A common refrain, and usually one that someone has to say when you're not really interested in whatever they're offering. This is far from the most upstanding reason to call yourself a vegetarian, but sometimes you have to wield your vegetarianism as a defense mechanism against those questionable food items that are sprung on you. Although being a picky eater isn't something worth celebrating, it is nice to know that if something particularly strange comes your way, you can always cite your concern over the cooking process, whether it's serious or not. Easy enough to feign distress while asking whether meat residue might have been cooked into it. You should still have some sort of code so this is never done to your friends and family.

A successful vegetarian cooking session is almost always simply determined by how good the meal tastes. When cooking meat, you have to worry much more about whether things are properly cooked -- too little, it's unsafe; too much, it's ruined -- which is a hard concept for a vegetarian to understand.

Ignoring the question of whether hunting is in some way immoral or simply a natural part of life, gathering just seems a lot easier. Sometimes it's good to be a couch potato instead of a couch deer.

Often times you find yourself in a restaurant that simply has no entrees for vegetarians, or the single one they have isn't something you like. Not wanting to make your friends go somewhere else, you now basically have a free pass to eat all the french fries, onion rings and biscuits you want. Unfortunately, some places fry these things in meat oil which voids this scenario, but more and more places seem to be embracing the peanut/canola/vegetable oil option. And of course, to overcome that pesky health guilt, you should just say you're eating all those mozzarella sticks for your "friends' benefit."

With only around 3.2 percent of Americans being vegetarian, almost no commercials are geared towards non-meat eaters. This means you aren't constantly being convinced you're hungry late at night and need to spend money on food. As long as a pizza advertisement doesn't come on. 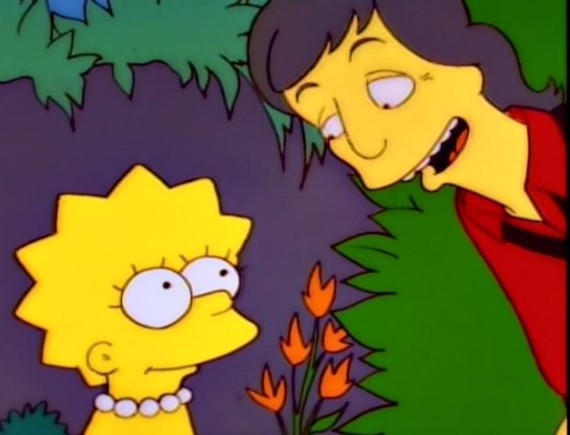 Finding another vegetarian is a special thing. Finding a potential romantic partner who's a vegetarian is a thing worth jumping for joy over. With statistically so few vegetarians, even if you would happily date a carnivore partner, it's just great to find someone who shares the lifestyle. Also, being a vegetarian means you're in particularly good company with famous people, from Leonardo da Vinci to Natalie Portman. Pictured above is Paul McCartney and Lisa Simpson bonding over their vegetarianism, which seems like a hangout that could make anyone envious.

With limited options at most fast food restaurants and bodegas, vegetarians are either forced to find better places to eat out (if they can afford it) or at the very least, to cook vegetarian meals for themselves. Learning the basics of cooking and eating better are valuable skills that everyone should work toward. In a way, vegetarians are kind of lucky to be forced into the whole discovery process.