Each week HuffPost Women rounds up the most hilarious 140-character jokes from women on Twitter we could find to brighten your day. We've got to hand it you ladies, these keep us laughing every single week. For this week's great tweets from women, scroll through the list below. Then visit our Funniest Tweets From Women page for our past collections.

My Twitter clique just consists of me and this pizza.

Maybe we'd all read more and watch TV less if a book ever told the story of a conventionally attractive person who is weird and single.

And for my next trick, I'll turn my strapless bra into a belt.

Fun fact: I like to refer to my shoulders as "Broad City"

I would like to relocate my early morning exhaustion to the time I'm trying to go to sleep.

I want a pet sloth just so I can look like I do anything quickly.

If by "adrenaline junkie" you mean I wait til the last minute to charge my phone then yes. Yes I am.

Yeah, I mean, Coachella sounds chill, but have you guys heard of Netflix?

When life gives you lemons, throw them at boys.

Remember - you can never UNtell your mom there are a bunch of new emojis.

it is a truth universally acknowledged that a single woman in possession of a decent job has, somewhere, a tote bag full of other tote bags

I want to change the world. Into a dragon. Or maybe a hippo.

But if I go out, who is going to stick their finger in the cat's mouth and ruin his yawns?

I spend every morning resetting the passwords I've forgotten.

Guys will never have news to drop with the impact of "I'm pregnant." The closest thing for them is "I have a kidney stone & it's yours."

We get it Oxygen network, Kind of famous people have families.

PHOTO GALLERY
Maya Angelou: The Quotes That Made Us The Women We Are

The 20 Funniest Tweets From Women This Week
Maya Angelou: The Quotes That Made Us The Women We Are 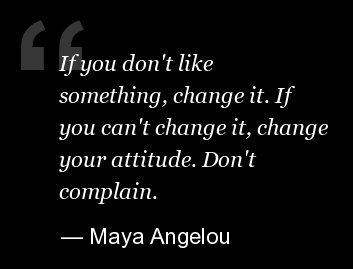