If your social media feeds look anything like mine the past few days, they are flooded with divisive and dramatic posts about this week's elections.

One election post on my feed, though, stands out from the rest.

It is drama of the good kind -- the kind that gives you pause, reflection, and a feeling of gratitude. It is a photo of Susan B. Anthony's headstone adorned with "I Voted Today" stickers and flowers. 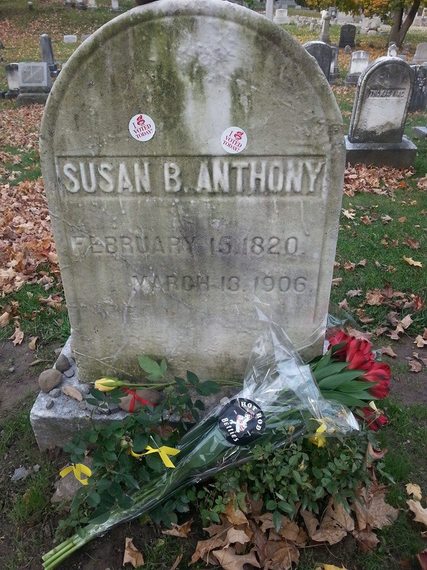 The photo was taken at Mount Hope Cemetery in Rochester -- the upstate New York city where Anthony lived and worked while leading the fight for and passage of the Nineteenth Amendment to the U.S.Constitution in 1920: the right of American women to vote.

I tracked down the woman who took the photo on November 4, 2014 (Election Day) to tell me more about it. Her name is Sarah Jane McPike, 34, of Rochester. She is owns a popular modern retro clothing store in the city of Rochester called Hot Rod Betties.

"I first registered to vote in my early twenties. I had gone down to Washington for the march for women reproductive rights in April 2004. That was the year my eye became open on the importance of voting and politics," McPike said.

While on the bus ride to Washington, McPike watched a movie called "Iron Jawed Angels" about the beginning of the women's suffrage movement.

"I was so inspired and felt so empowered by all of these women," McPike said. "So the first year I voted I brought flowers to Susan B. Anthony's grave."

McPike regularly brings flowers to Anthony's headstone after she votes. Others bring their "I Voted Today" stickers and place them on the headstone as a symbol of respect and gratitude.

"In a weird way I go there to fan my flame when it gone out," McPike said. "It is important to me that regardless of politics and sides that as a woman especially a single mother female business owner that I pay my respects to the woman who fought for my freedom and my right to vote."

This is what I am choosing to focus on this post-Election Day and I'm adding to my bucket list: Visit Susan B. Anthony's grave on Election Day to place my "I Voted Today" sticker and say thanks.

Journalist with 20 years of experience, including Reuters, USA Today Network and her son's two baby books.