Empowering women has been held up as an answer to myriad global problems, starting with poverty. According to the Global Poverty Project, women make up half the world's population and yet represent a staggering 70 percent of the world's poor. As the report notes, "We live in a world in which women living in poverty face gross inequalities and injustice from birth to death. From poor education to poor nutrition to vulnerable and low pay employment, the sequence of discrimination that a woman may suffer during her entire life is unacceptable but all too common." 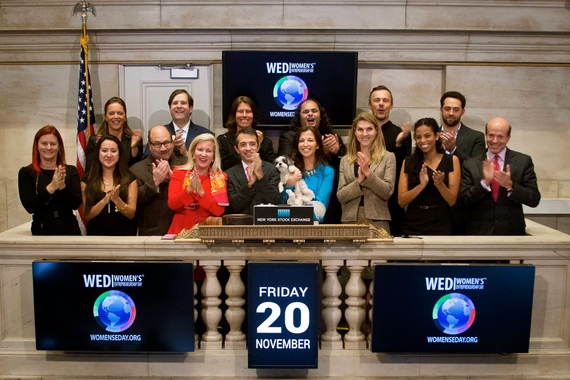 Gender inequality affects women everywhere, not just in developing countries. Here in the U.S. we have recently been reminded that equal pay for equal work is still a dream deferred, even amongst the highest echelons of Hollywood stars. Nurturing the self confidence of girls and young women, and revolutionizing the opportunities that are available to them to take charge of their own destinies, starts by showing them real-life models of inspiration. And when these girls grow up to be women who have a strong voice and influence in their communities, the world at large benefits from the influence of cooperation, communication, and compassion that is so commonly associated with women at home and in the workplace.

It is these considerations that motivated entrepreneur Wendy Diamond to launch Women's Entrepreneur Day (WED) last year. After volunteering in Honduras with the Adelante Foundation, which provides microcredit to low-income women, Diamond decided to form an international event that would celebrate and advance the work of female business owners, entrepreneurs and changemakers.The goal is simple: empower the 4 billion women on the planet and bring hope to 250 million girls living in poverty.

From the immediate success of WED, it's clear that the global movement to empower women entrepreneurs, innovators and job creators was waiting to be activated. WED was first held at the United Nations last year and, incredibly, observed in 144 countries right from the start, opening up a bounty of impactful community service ideas across the world. This month, the second annual International Women's Entrepreneurship Day was again held at the UN, led by serious discussions about critical issues affecting women and men worldwide. The event was live-streamed to 800 universities and colleges across the globe, reaching 1.2 million young women, students, and millennials, and capped by the awarding of Women's Entrepreneurship Day Pioneer Winners, with trailblazers across multiple categories recognized for their accomplishments.

"Women worldwide have historically been underpaid, undervalued, underrepresented, underfunded - and underestimated...and still are," says Diamond. "Women-owned businesses are set to increase by 90 percent in the next five years. We need to change the status quo because lifting women creates economic opportunity and vitality locally and globally."

WED promotes what it refers to as six pillars of growth for women in business:

Diamond reports numerous inspirational success stories from WED's 2014 launch event. Sharifa AlBarami, the executive partner and co-owner of Al Jazeera Global Services & Investments (AGSI), is empowering women and girls in Oman to use their vote against the archaic practice of arranged marriages. In war-torn Syria, May Massijeh rallies against sexual assaults on women, while at the same time using her position as content creator of Daraty, an educational children's game, to introduce the next generation to science and engineering. Her Royal Highness Princess Reema bint Bandar Al Saud, a social activist and a member of the Saudi royal family, began hiring women sales clerks for the Harvey Nichols showrooms. And the Australian government stopped traffic on the Sydney Harbor Bridge to allow WED ambassadors to climb the structure, symbolizing a bridging of the world by women entrepreneurs.

As part of its growth, WED has now implemented several developments: a worldwide structure of regional ambassadors; a partnership with the United States Association for Small Business and Entrepreneurship; an increased network of over 5000 universities and colleges that will participate in WED 2016; a mentoring program and network to inspire impoverished girls across the world; and a worldwide competition to identify the most innovative companies founded by women, to be presented at WED 2016 in front of investors and philanthropists who can advance their growth.

"Statistics show that when women are provided with economic opportunity, 90 cents on the dollar goes back to their families," says Diamond. "Encouraging and empowering more women to enter business will have an incredibly positive financial and social impact on global communities."

We should all support the aims of Women's Entrepreneur Day because we all have so much to gain from women's empowerment across the world. That's why Causecast is making it easy for companies to get involved in the WED movement through a campaign that encourages employees to get involved in this worthy global movement. WED is using its social media platform and the hashtag #WomenWOW to engage and activate women and men globally to pledge their support to a women-owned business and greater cause by donating their "time, talent or treasure" on December 2.

To find out more about how you can step up to support WED, go to http://womenseday.org/ It's time to give women and girls the inspiration, tools and equality they need to direct their own futures and pull themselves, their families and the world towards a better place.