West Hollywood is remarkable as a dining destination, combining cutting-edge cuisine with breathtaking city views. We'll discuss parking on some other occasion, however. In the meantime, I invite you to join me as I recount three of my favorite hot-spots to sip a cocktail on the patio before delving into some of the most innovative dishes in town.

Alma
After a brief residency, the Alma team of chef Ari Taymor and co-owner Ashleigh Parsons took over the food and beverage operations at The Standard Hotel on a permanent basis in July. The pair also helmed the downtown version of Alma, which Bon Appétit named Best New U.S. Restaurant of 2013.

At the time, Taymor was selected as a "Best New Chef" by Food and Wine, and was named a Rising Star Chef finalist by the James Beard Foundation. To the surprise of foodies across the city, that location shut down in late 2015, possibly a victim of too much good press and impossibly high expectations.

I don't want to contribute to the same problem, but, alas, you have to put Alma at the top of your list if you want a truly unique and memorable dining experience.

Start on The Standard's pool deck overlooking West Hollywood and enjoy some of Taymor's snack selections before heading into dinner. I highly recommend the chickpea fries with pickled chile or the puffed onion with avocado-sorrel dip. The menu, though ingredient-focused, is a nod to the nostalgia of country club fare before the words "chef-driven" and "farm-to-table" entered the lexicon.

Next, head inside to Alma. While intimate dining space looking out on Sunset Boulevard is reminiscent of a mid-century diner, the food is anything but last century. Start with the Clark Street bread with housemade butter. This earliest staple of human agriculture may have finally reached its apex here. Meanwhile, the English muffin with uni, Burrata and caviar offers something a little more exotic. And try to squeeze in the seaweed and tofu beignet if you have room. If you don't, make room. 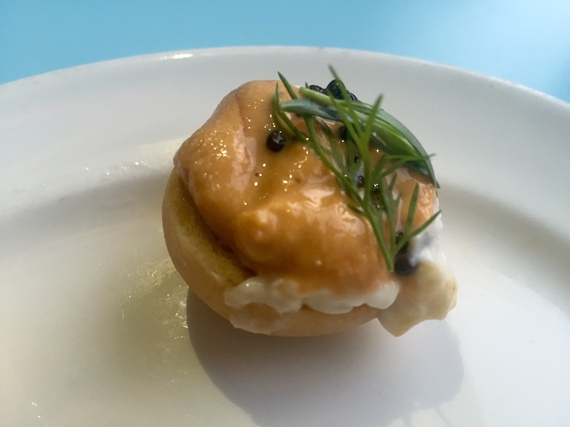 Then move on to one of the stars of the menu -- frozen foie gras with smoked maple, coffee granola and carrots. The offering is a carryover from the downtown location and one of the most creative dishes I've found in this exceptionally creative city. The rich foie gras melts into the crunchy granola to provide a truly surprising blend of flavors. 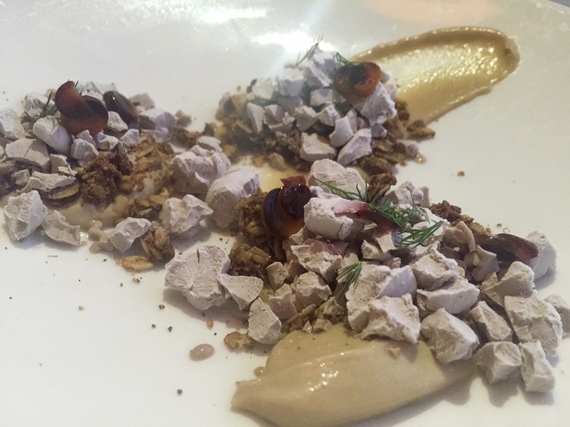 You'll have room for a bit more, so go for either the very fresh local Big Eye tuna with shelling beans, peppers and black rouille or the dry-aged New York steak with sunchoke, morels, and brown butter bearnaise. Taymor is enamored with the sunchoke, and he should be. What an underserved veggie.

Parsons curates the wine list, herself, with a focus on natural wines. Thinking white? Try the Galicia albarino. Red? You can't go wrong with the GSM blend by California label, Donkey & Goat.

E.P. & L.P
Arrive early at this WeHo hotspot and head to the L.P. rooftop bar to catch the golden glow off the Hollywood Hills at sunset. Located at the corner of Melrose and La Cienega, L.P. (short for Long Play) serves up several handcrafted cocktails with an Asian flare. Their version of the Highball features Japanese whiskey, Thai ginger ale and lime. The Old-Fashioned also features Japanese whiskey, spiced with cinnamon, ginger and cardamom bitters.

Head downstairs to dine at E.P., self-described as an "Asian eating house without regional boundaries." Bring a friend or two from the bar because you're going to be sampling a lot of plates family-style. If you go for the full E.P. experience, you'll get flavors from Thailand, China, Vietnam and even Fiji, where Chef Louis Tikaram spent time during his youth before honing his cooking skills in the Outback cities of Sydney and Melbourne.

You may think ceviche is passé, but then, you just haven't had it Fijian style. Definitely start with the Tikaram's ceviche with baja rock shrimp, served with a little heat from the chilis and a little sweet from the coconut milk. And put an order in for the sticky pork ribs with five-spice caramel (not overly sweet) and pickled serrano chilis. 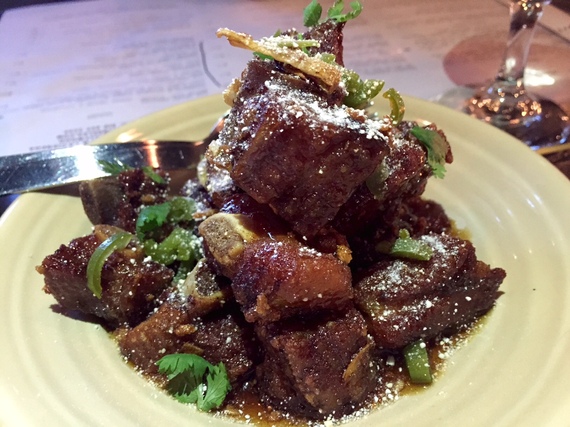 As far as larger plates, you can go light with the turmeric and coconut clams with sea beans and red chili oil. If you're prepared to load up on carbs, try the Dan Dan noodles with hand-cut pork neck, chili, green onion and Szechuan sauce.

The Boxwood at The London
The London has one of those magical locations that provides amazing views of the city and is so easily accessible to your friends coming from the Westside or the Valley that it makes the perfect spot to meet for drinks and dinner.

The Boxwood's rooftop lounge area serves up some stiff cocktails for your after-work blues. So order a dirty martini and enjoy the panoramic views of the city. Or try one of their specialty cocktails, I recommend the Queen Victoria, which marries Hendrick's gin with its soulmate, cucumber.

When you're ready to move on to dinner, begin with the robata -- a mix of the Japanese eggplant, miso bass, salmon pesto, lemongrass chicken and wagyu beef. Each piece is sold separately, and provides about two or three bites, depending on your appetite. Put in an order immediately for the savory duck ravioli and/or the chicken dumplings with pickled cucumber, as it may take a minute to relay that message down to the kitchen, and those items back up to the penthouse. 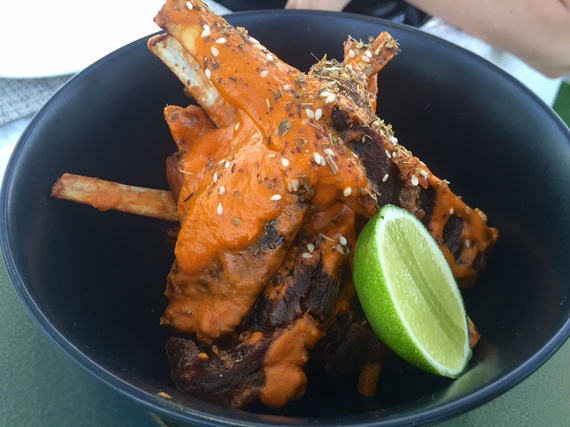 Chef Anthony Keene's Tikka Masala pops up several times on the menu. Try it on the flat-roasted chicken -- it soaks really well into the Basmati rice, as you must be imagining right now. Hungering for red meat? Order the Black Angus filet Mignon with smoked Béarnaise, and brace yourself. There's nothing petite about this cut of beef, and the chef knows exactly how to serve it--red as Rudolph's nose in the center -- so just leave the cooking to him.

Still have room for dessert? The staff tells me several regulars come just for the Boxwood's sticky toffee pudding, which you'll understand why after bite one. But I think the mango cheesecake gives it a serious run for its money. I suppose it depends on your own particular palate. But that's the beauty of West Hollywood, including its dining scene: There's something for every palate.