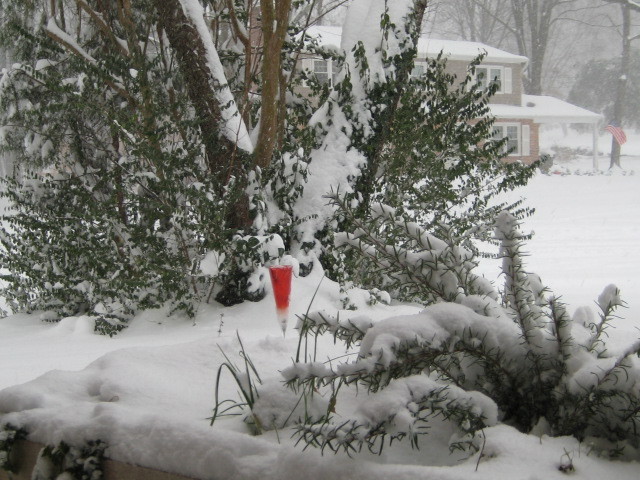 Worst decade: The Republican Party, from Karl Rove's pronouncement of a "permanent majority" to total collapse and minority status.

Worst performance of the year: The Democratic Party, who after securing the White House and a Democratic majority have been so brazenly arrogant and politically incompetent as to have allowed a conservative comeback one year after people thought, said and wrote that conservatism was dead.

Biggest winner of 2009: Sarah Palin. No man could have bailed on his governorship to find himself in national news continually, with supporters growing daily, while orchestrating it all from a Facebook page, and putting so much fear into the DNC that they put out an oppo memo on her, even though she's not running for anything (until 2012, that is).

Biggest winner of the decade: Hillary Clinton. There are no equals for this one. After being dragged in front of Starr's tribunal in the 1990s, previously pronounced dead after "Hillarycare," Mrs. Clinton became a highly approved New York senator, which she jettisoned into a presidential candidacy, landing as Secretary of State (a job she's managed far better than she did her '08 campaign), because even after the brutal primary battle Pres. Obama knew she was invaluable to have at his side, ending the decade with an approval rating higher than Barack Obama's is today.

Most wonderful to watch in 2009: First Lady Michelle Obama, who has re-envisioned what it means to be first lady, from her guns to White House garden, not to mention her community service and the outreach to the DC community, amidst a whirling schedule as a mom of two wonderful girls. Mrs. Obama has exhibited pure, unadulterated class, non-pretension and female power in a way that no other first lady has done.

Biggest credibility collapse of the decade: John McCain, who began the decade as a maverick, much sought after Republican renegade, but who is now nothing more than a fading shadow of his former independence.

Disappointment of the decade: That Al Gore didn't take the oath of office in 2001.

Biggest fall: Tiger Woods, because a cheating louse is one thing, but a sex addicted wee hours troll, while his kids grow up with an absentee dad, is inexcusable.

Highest ride of the decade: Fox News Channel. Love 'em or hate 'em, no one can beat 'em.

Schmuck of the decade: John Edwards, whose story is so filled with embarrassing, mortifying and stupefyingly irresponsible elements that anyone who ever bought into his con should be unqualified to work in politics.

Biggest disappointment of 2009: Sen. Russ Feingold, for voting against mandatory coverage of pap smears and mammograms, because preventative care for women is too expensive.

Most powerful of 2009: Nancy Pelosi, who, love her or hate her, stood on a line to lead.

Biggest audience "screw you" of the decade: "The Sopranos" ending, with any number of choices possible other than the lame ass, lazy, cop out, unimaginative, ruined the whole series, won't buy the DVDs, ending that David Chase & company delivered to the show's devoted fans. (Preferred ending: They all land in Naples* where Tony can exact revenge against Furio, unless Carmella runs away with him first.)

Most wonderful discovery of 2009: The way people in Virginia decorate their homes at Christmastime. Not with bright lights, though some do that; and not with big extras on the lawn, though a few do that too. Most simply reclaim a smidgen of colonial times by putting wreathes in every window, some adding lights, with spotlights on front doors, taking the onlooker back to when the Commonwealth of Virginia became so great.

Biggest rise of the decade: New media, those of us who exist beyond your brother's blog, and who helped take out traditional media, with the heights that we can climb still unseen.

Most stupendous comeback after aortic valve replacement: Robin Williams, in a tour de force for HBO that will knock you out.

Best TV pleasures of 2009: It's a tie: "True Blood" and "Glee," with "Dexter" close behind. UPDATE: As Billie reminded me in the comments, "Mad Men" deserves to be in this one, too (don't know how I forgot it, as it's one of my favorites); the JFK assassination episode alone making it remarkable.

Most sobering realization this decade: The U.S. doesn't make squat anymore and no one has the vision of John F. Kennedy to jump start an innovation economy, green or otherwise, to turn the sinking ship of the U.S. of A. economy around.

Rise of the decade: From talk radio to Senator Al Franken, a man who went on to show Democrats how power is used, while infuriating Rush Limbaugh in the process, as Franken fought to pass the rape law against private contractors, standing up for women in the military.

Suckers of the decade: National Organization of Women, and Planned Parenthood, who got beat by a guy named Bart Stupak.

Most overwrought reaction of the decade: The political left's bellyaching about Jack Bauer and "24."

Scariest moment of the decade: George W. Bush's reaction when he found out we'd been hit on 9/11.

Happiest moment of 2009: The Beltway Christmas blizzard; where a wonderland of snow transported us into an alternate universe; where neighbors became friends and no other place existed, time seemed to stop, work wasn't so important, cocktails tasted juicier and wine fuller, difficult recipes delivered in a snap, while the fireplace burned brightly; all of which was gone in the rain that fell the day after Christmas, delivering us all in a slow slide back into reality, shifting the two feet of holiday snow and white wonder to an always accessible dream now tucked carefully away in a safe space in our minds, making us wonder if it had actually happened at all, though we knew it did, because when we shut our eyes we can still see and sense its magic.

The year is over.

Grab a new dream and deliver it to yourself.

Happy New Year to everyone at Huffington Post. It's hard to imagine what we'd all do without you.

* The original site of my suggested "Sopranos" ending was Sicily. A million mea culpas, because of course the Sopranos hail from Naples, as I was reminded by David Chase, the creator of the series, in a letter that accompanied the full DVD set of the show, in the classiest "up yours" I've ever received from anyone. But set my suggested ending in Naples and you've got something.

Taylor Marsh (video) is a political analyst, with podcasts available on iTunes.