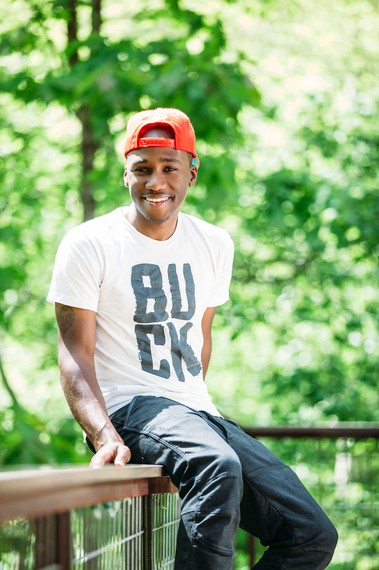 The extraordinary writer, filmmaker, and professor is on a mission to reach all people - many of whom may have never been introduced to the power of words, the power of literature. MK's approach is multi-layered. It may have started with the book BUCK: A Memoir but now he's implementing the full force of his multi-dimensional approach. If you don't like to read, maybe you like to listen to music? BUCK: The Soundtrack is just another phase of his plan. Soon to be followed by BUCK: The Movie and even fashion. MK's approach is similar to a pastor who meets the congregation where they are, both spiritually and physically. Yet, MK's mission is about literacy and liberation. We briefly spoke about his love for words, hip hop, and the Baltimore community. Here is part of our interview.

Most people know you as an author. Where did you get your passion for rhyming?

My passion for writing comes from a love and passion for language. It runs in my family, both my parents have that [passion], my grandfather never finished high school. He dropped in out about the 7th grade, but he wrote every day in various journals and before he died he told my pops that he couldn't hold the pen anymore and that was the day he died, the day he couldn't hold the pen. Writing is in my DNA.

Some of the early artists that inspired me were definitely hip hop artists. I saw the power of words - my brother was locked-up when Nas's Illmatic came out. I played Illmatic for my brother behind bars and it was the first time he herd it. I played "New York State of Mind" and he went crazy. He had the whole cell block listening in. I had it on tape and I was playing it out of a boom box. That's when I saw the power of music - the power of hip hop. It had the ability to change people's realty.

Who were some of the early hip hop artists that inspired you?

Nas, Common, a lot of Philly artists: The Roots [Black Thought] - I was also inspired by writers like Amiri Baraka, Jack Kerouac, Allen Ginsberg, Walt Whitman, Toni Morrison, on down the line.

Is it different writing a book/memoir than it is writing rhymes?

Sometime I will have an idea and it will exist in different mediums. With BUCK I see it as a memoir, a soundtrack, a movie, and then also a soundtrack for the movie that will be different than the book. I also see BUCK as wearable too. I wear BUCK shirts at a lot of my shows and people order them from my website and wear them - so I see it as fashion too.

I have ideas that exist on multiply levels. And sometimes I have ideas that exist just on one level, it's just a verse or it's just a poem or an essay. Other times I want to maximize the idea and stretch it through different genres and let it translate throughout different mediums. That what I'm doing with BUCK - letting it translate through different mediums. The BUCK soundtrack is not the same thing as BUCK: A Memoir but it's a musical translation of the literature.

How did you come up with the vision to do a soundtrack for the book? You don't see that every day.

You know how a little kid will have sneakers on that are too big and his parents say, "You'll grow into them," and eventually the kid does. For a lot of projects that is how I work. I grow into things. For example, when I wrote the proposal for BUCK (2011) I had in the proposal that there would be a mixtape with music related to the book. At that time, I wasn't an MC , I hadn't made any songs, and had never been in a recording studio, I hadn't done music at all. Where this music was going to come from? I didn't know but I put it in my proposal because I knew by the time the project was ready to drop, something was going to break - major moves were going to be made - major transformation would have occurred - I couldn't see it the way it is now but I knew to put it in the proposal. As time has moved forward, I grew into that idea of a mixtape. I started by contacting my favorite artists and seeing if they could drop tracks for the project. And as I was writing BUCK I also started writing rhymes.

I never told this story but now it's starting to make sense - I always listen to music while I'm writing and a lot of times I will listen to movie soundtracks - amazing movie soundtracks from composers but while I was writing BUCK I couldn't listen to the traditional movie soundtracks that I normally listen too because BUCK was a lot harder than that. The rhythm of BUCK was a lot grittier than that so I was listening to mainly hip hop instrumentals and so listening to instrumentals is what moved me to come up with hip hop bars and that is when I started writing rhymes. I was writing BUCK and listening to so many hip hop instrumentals that I had my own rhymes and that's how it started. After that Rass Kass reached out for me to be on a song called "Godz N The Hood" that already had Talib Kweli on it. He reached out for me just to talk on the song and I ended up rhyming on it without them knowing I was going to do it. And they were like, "Oh Sh*t, you killed it," these are people that I really look up to, so if they thought I killed the track - so now the mixtape idea really has wings to it. I didn't see it then but now it's a reality. Next thing you know, I was in the studio working on the BUCK soundtrack.

You're at Morgan State University in the heart of Baltimore. Baltimore has been hot this summer with the relationship between law enforcement and the community. How do you describe what you're seeing in Baltimore and throughout the nation?

I describe it in my book "It's Bigger Than Hip Hop" as an occupying force. So when I look at Iraq and Afghanistan and see the U.S. presence occupying those places - claiming that they want to protect those people, but not really. They're protecting the corporate interest of America and Europe - so they're really not there to protect the people. They are there to protect economic interest and maintain a level of order so that the people don't disrupt the economic plan. So when I go to the hood and see the cops - none of them from Baltimore - not from the city - not familiar or haven't been around black people - when I see the situation, I'm wondering am I in Iraq? Am I in Fallujah? Or am I in West Baltimore? Then when I see the real tanks and the real military weapons - like in Fallujah - when I see that then it's totally clear to me that they are an occupying force. This really is a similar situation and the way that poor black people live in America is definitely similar to those living in a so-called third-world country.

Having to protest that your life really matters - having to say those words. Not having the resources you need to survive. Not having the education system. Not having systems that work. I see a lot of similarities and parallels.

Also I've seen a lot of coming together in Baltimore; a lot of unity among the people. Baltimore has awakened and there is a renaissance that is happening around the rebellions and the art that has come from the protest. I shot my video in the midst of the whole situation.