"Better Call Saul" had a record-breaking debut on Sunday, followed by a second episode on Monday. So far we've seen what Saul, née Jimmy McGill, was up to in Albuquerque circa 2002, from hustling as a for-hire defense attorney to wooing clients at a local diner (which will look very familiar to "Breaking Bad" fans).

But besides Saul (and the surprise return of another "Breaking Bad" favorite) we also got to see Jonathan Banks reprising Mike Ehrmantraut and a new main character, Michael McKean's Chuck Thurber. HuffPost Entertainment sat down with the two actors to find out if we'll eventually see Mike meet Gus Fring in the "Breaking Bad" spinoff series and what's up with Chuck's mysterious illness.

What was it like to go back and see Jimmy before he becomes Saul?

Banks: Well, it’s a brand-new adventure for me because I don’t know him. Those first two shows that you see, I’m just meeting him, and he irritates me.

McKean: And I’m his successful big brother. I’m the good brother. I’m the one who’s been bailing him out for years and years and now suddenly he’s my caretaker, to a certain extent, because I’m having difficulty interacting with the rest of the world. So be very careful who you’re nice to, because something it’ll go bad on you. But, I think I’m a really good brother until I’m not.

Will we find out eventually what Chuck's illness is?

McKean: Eventually. And it’s real. It’s not something that Vince Gilligan made up, although God knows he’s made up plenty. This is a real affliction.

Do you think Chuck has any idea at this point that Jimmy is going to become a criminal lawyer?

McKean: I’m shocked when he becomes any kind of lawyer. It’s interesting because we have a show that begins in 2002, but we flash further back 10 years before that, and a few years before 2002 as well. So the show is about playing catch-up with itself.

Jonathan, what’s it like playing Mike again before all his crazy experiences in “Breaking Bad”?

Banks: It’s not as challenging as I thought it might be because you’re going to learn a lot about Mike. When you meet him in “Saul,” Mike already has a hard edge.

Because "Saul" takes place after Mike was a cop in Philly, right?

Banks: Well ... you learn why the edge gets even harder and why the soul gets even more lost.

Will we see him when he meets Gus?

Banks: I wouldn’t tell you that. You know I couldn't! But no, to my knowledge, no.

What about his granddaughter, will she appear? 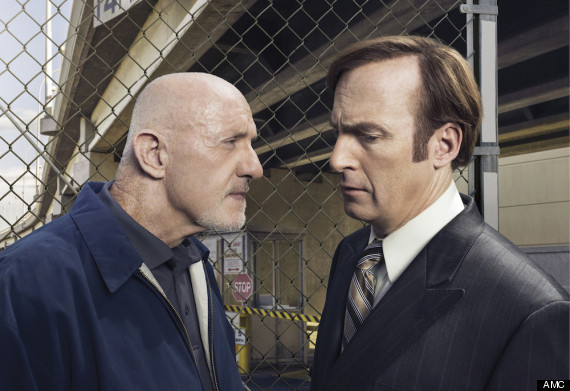 This is such a different show from “Breaking Bad,” with a different tone. Were you surprised by the direction "Saul" took?

Banks: The first two or three shows I'd walk on the sound stages and the ghosts would be there. I’d think, “Aaron [Paul]’s gonna come around the corner or Bryan [Cranston], Dean [Norris], Betsy [Brandt], RJ [Mitte], Giancarlo [Esposito].” Somewhere around the third or fourth show I thought, “This is fun. This has a life of its own.” We’re talking about people that I loved, but they gone! All the new actors that have come into this, they want it to be good, there’s not that shitty attitude. It’s a pleasure, all over again. It’s one of those lucky periods of my life that’s just pretty darn good.

Michael, Chuck is such a mystery so far. How did you go about creating the character?

McKean: I accepted the role without ever having read a punctuation mark.

Wow. Did they give you a character description?

McKean: They told me, "Vince Gilligan." And I’d worked with Vince years ago on “X-Files.” On various projects he’s tried to get me involved, but I was just never available. This one just kind of fell into place.

I was doing “All the Way” with Bryan Cranston last year. We were about to go on and Bryan turns to me and goes, “You know, you really should play Saul’s brother." So then after [the show] he says, “Yeah they’re doing the prequel. You should play his brother. Hopefully you could shoot more than one show at time because your [character is] stuck in [his] house.” And that’s all I knew about the character. So the next day they offered me the role. I said, "Of course." I was a huge “Breaking Bad” fan.

Would you say that you’re still in the dark with the show or do you know where it’s going?

McKean: No, I know where it’s going. Before the ninth show, Peter Gould and Vince called me up and said let’s talk about this. They kind of laid out the structure of the episode in which certain aspects of my character are revealed that were not known before. And I was really glad I didn’t know them before because it helped maintain the darkness. Other than that, it was script by script. But as far as the broad strokes go, every episode I learned a little bit more. It was fun working that way.