Graphene just might be the world's most incredible material. A honeycomb-like sheet of pure carbon only one atom thick, it's one million times thinner than a human hair and yet 200 times stronger than steel. It's also an excellent conductor of heat and electricity and is stretchable, flexible, transparent, and impermeable.

And now scientists at Caltech in Pasadena, Calif. say they have figured out how to make the stuff on an industrial scale--a breakthrough that could open the floodgates to a seemingly endless array of graphene-based products.

Game-changing products. How about a cell phone you could fold up like a handkerchief and stick in your pocket? Or a giant video screen you could hang on the wall like a sheet? Or how about ultra-fast-charging batteries, or super-efficient see-through solar cells?

All those and many more products may be available in the not-too-distant future, Dr. David A. Boyd, a staff scientist at the university and the researcher credited with developing the new graphene-making process, told The Huffington Post.

“You could imagine something crazy," Boyd told the Pasadena Star-News. "You could wrap a building in graphene to keep it from falling over.”

Faster, better, cheaper. The new process is faster and simpler than the usual approach to making graphene. Instead of 10 hours and up to 10 separate steps, it involves one step and takes just five minutes, according to a written statement released by the university. And unlike the usual approach, which involves temperatures of 1,000 degrees Celsius (1,800 degrees Fahrenheit), the new process works at temperatures no higher than 420 degrees C. That's cool enough to be compatible with existing electronics manufacturing processes, according to Boyd. 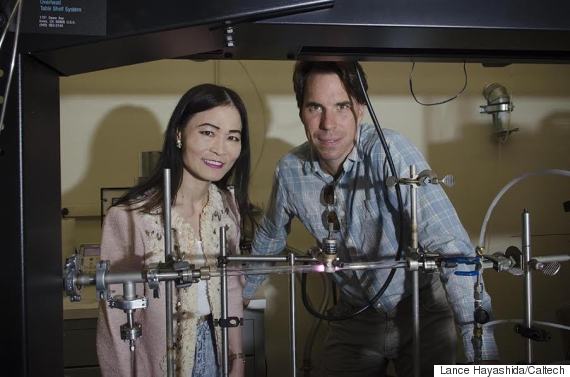 Dr. David Boyd with Dr. Nai-Chang Yeh, a professor of physics at Caltech.

Boyd said the new process grew out of an attempt he made to reproduce a previously described method of fabricating graphene, in which a copper surface is heated and then exposed to methane (which supplies the carbon atoms that form the graphene).

A lucky phone call. Boyd wasn't having any luck until a phone call distracted him and he inadvertently let the copper heat for longer than the usual time. When he returned from the call, he discovered that graphene had indeed formed--because the extra heating had removed a key impurity.

"It was an 'A-ha!' moment," Boyd said in the statement. "I realized then that the trick to growth is to have a very clean surface, one without the copper oxide."

Further refinements in the process showed that the copper oxide could be removed without high temperatures. Said Boyd, "We used a different chemistry."

A Nobel past. Graphene was discovered by scientists at the University of Manchester in England on Oct. 22, 2004. The scientists, Andre Geim and Konstantin Novoselov, were awarded the Nobel Prize in Physics in 2010.

A paper describing the new process was published in the March 18 issue of the journal Nature Communications.