In February 2016, the Sustainable Development Goal Network proposed an indicator for target 11.7 - public spaces accessible to all as "the average share of the built-up area of cities that is open space for public use for all, disaggregated by age group, sex and persons with disabilities." Such information comes at a time when there's been a movement to make cities more accessible and livable to all. Indeed, creating accessibility is empowering those who would otherwise be isolated in order to give them an opportunity to be an active part the possibilities offered by society. In four cities, various actors have implemented projects to enhance the integration of people with disabilities.

In Medellin, the program "Improvement without Barriers" by the Institution for Social housing and Habitat (ISVIMED) aims to improve the quality of life of the disabled poor and their families. According to Lou D'Angelo, the idea is to intervene in their houses in order to adapt the spaces to the specific needs of the beneficiaries. One of the project's requirements is that the beneficiary earns no more than two minimum wages. The program is entirely financed by the city of Medellin, and the low cost of each intervention enables the program to reach a relatively high number of houses for a limited budget (US$1.3m). Yet, the main difficulty that the program met was the lack of reliable data on disabled in Medellin. As they could not identify potential beneficiaries themselves, ISVIMED promoted the program through the media, and pushed people to present themselves. As a consequence, the program probably benefited to the most connected and integrated. 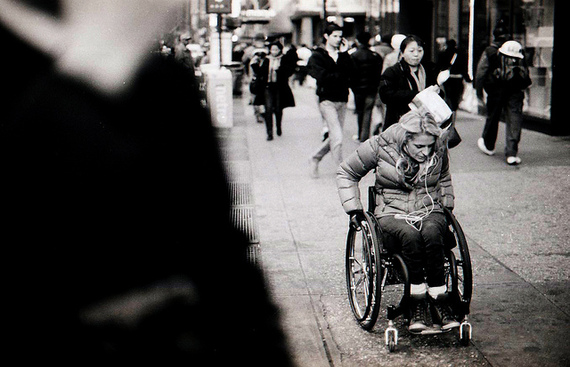 For Marcela Scarpellini, the city of Caracas is also challenging for those who are not fully able-bodied, especially when it comes to the state of sidewalks and roads. The organization Caracas Accessible came up with the idea of painting small potato sacks and filling them with cement and placed them in the space between the street and the sidewalk - spots where ramps should be placed. The exercise showed that remedies could be that simple, fast and low-cost, while making a very big difference in the lives of people with disabilities. Caracas Accessible have also undertaken projects with the Municipality of El Hatillo, in which they are helping design and plan punctual interventions in public spaces that would normally facilitate the displacement of people with disabilities. Together have gathered neighbors in order to discuss laws on the matter, as well as to listen to other needs people may have in order to find ways of integrating them into the plan.

Disability is not only physical; it is related to an umbrella of impairments, which also includes mental illness. In India, Association of People with Disabilities (APD) engages with slums in Bengaluru and other small towns to identify, build capacity and attempt social integration of people with mental health disability. The APD India works across several verticals of livelihoods, education, healthcare and advocacy to empower the people with disabilities. Keeping in tandem with this gap, APD commenced a community mental health program in 2004. The program has been operational for more than 10 years now. Aditi Hastak highlights the recent stats, which record that 1,137 people with mental disorders were identified and involved in the health program in 2013-14 and 947 in 2014-15. While working with individuals to improve the situation is on-going, engagement with communities and government agencies for capacity building is also happening. Yet, a major factor that still needs attention is the availability of experienced and specialized professionals in taking care of such cases.

These articles presented initiatives from around the world to improve the mobility of people with disabilities in cities. Check out more of the discussion on innovations for greater equitability on URB.im and contribute to the debate.