Being better than chopped liver was sometimes a lofty goal during the five and a half years I provided Alzheimer's care for my mother Peg. Toward the end of my Mom's life, she was convinced that my partner Digney was her boyfriend. On most days, it was adorable and we would both laugh it off. She lit up like a Christmas tree every time Digney walked into the room. Because she idolized him, it took him half the time it took me to help her swallow her meds or get up from her chair. Usually I went with the flow and let my Mom think whatever she wanted, especially if it brought a smile to her face. 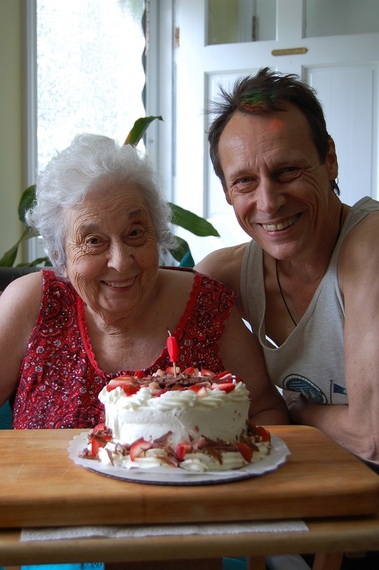 Peg and Digney
As Alzheimer's progressed, my mother became incontinent. Our morning routine often involved me changing the bed sheets, taking off Peg's wet pajamas, cleaning her up, putting on a fresh adult undergarment, getting her dressed, and then helping her up on her feet so she could amble the few yards to her comfy chair for breakfast. As we followed this checklist, Peg kept her eyes riveted on Digney, telling him how handsome he was or admiring the color of his eyes. He would blush, shake his head a bit, and chuckle at all the misguided attention. Sometimes, as he was struggling to get Peg's shoes on, she would look at him and exclaim: "You're a good soul. I love you!"

In comparison to other challenges with my mother's mental and physical deterioration, this scene was more than worthy of a Norman Rockwell illustration. Generally I found her ardent crush on Digney more charming than annoying. But one day when I was wiping Peg's behind as she continued to heap praise on my beau, I couldn't restrain myself and blurted out: "So what am I Mom? Chopped liver?" Peg just smiled and quickly retreated to her happy morning coronation where she was Queen for the Day, attended by me, her Lady in Waiting, and her own personal Prince Charming.

With her edit button broken, we never knew what would fly out of Peg's mouth. Every once in a blue moon her unfiltered honesty was downright refreshing. The morning after one of Digney's late night gigs, Peg examined his tired face and blurted out: "What the hell happened to you? You look terrible!" Ah, the frail queen dressed in leopard pajamas saves the day.