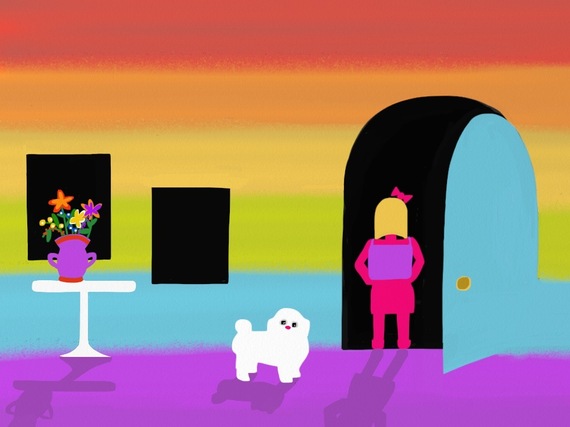 I asked my lesbian mother whether she would prefer if I turned out gay or straight. We were in my loft bed, a private place at the top of the world, perfect for a hushed conversation like this. I was aware of the topic's sensitivity, and I knew I'd put her in a bind.

"Well...." She was choosing her words carefully, but she wouldn't tuck me in without telling me the truth. "I want you to be happy, and to be whoever you are, but if you can pick, I'd want for you to be straight."

She tucked me in, adjusting my stuffed elephant's position under the blanket, and began her descent down the bed's ladder, passing my Mongolian box turtles, Harry and Kiwi, as she went, and wishing them a good night too.

Years later, in middle school, I sat at our crowded lunch table, a mix of cafeteria trays and my vegan/pre-anorexic munchies jockeying for space on the small square table.

Leah started in: "Who do you think is cute? What about Mike?"

Mike stood in the lunch line, looking just as cute or un-cute as any boy. I could barely tell them apart, the boys, with their boring, colorless clothing and their loud, dumb voices. But I held back my lack of opinion, concerned that this was not the correct response, and anxious to hear what the other girls would say.

Well, this was the longest I'd ever maintained any period of listening or silence, so I chimed in, unable to restrain myself, and giving in to a long-held curiosity:

"How he dresses. The stuff he says in class," the other girls chimed in, stealing from my pile of Brazil nuts.

And their eyes returned to the lunch line. I could feel in their bodies an energetic charge, a graining tension pulling from our table toward the cash register, where the boys now filed out and took their stratified places among the royalty and the proletariat of the middle school feudal system. Their trays were piled high with cookies and Gatorade, their bodies rail thin from the ravages of early male puberty. I admired how they could eat so much and still be skinny, but I could tell the other girls were seeing something more in their tousled, greasy hair and skater pants. My presence seemed to bring down the table; I was the only girl not moving about to get a better look at so-and-so. I sipped my Fresh Samantha and pulled off a piece of my Latvian bread, wondering if, in some dispassionate way, I was fated to be a lesbian.

Really, I felt pretty asexual. I had fixations on girls, wanted to be pretty like the prettier girls, thinner like the thinner girls. I thought that female bodies were beautiful. I remember the Russian immigrant girls with their enormous breasts, already ashamed of their hand-me-down clothes and broken English, slumping their shoulders to hide the fact that they were a year or two older than their naturalized peers.

I thought the skinny, tall girls with their training bras and mosquito-bite-sized breasts were beautiful, and the petite girls with silky hair and stylish clothing. The girls were so interesting to me: which ones covered their acne with thick powder and which ones didn't; which girls had gotten their period and which ones hadn't. With so much to admire and speculate on, it was confounding to me that my friends even noticed the boys, who trounced about like two-legged dogs, eating everything and smelling like moldy onions, with little variation among them.

But if I really thought about it... thought so hard it made my brain hurt...

"Okay, who is it?" Katie asked, maybe just a little doubtful at this point as to the veracity of my claim.

"Why?" Leah asked. And it was true, there had to be a reason he was cute, or I was failing to fulfill the rules of the conversation.

Leah shook her head. "I don't think you're really getting this."

There was agreement and laughter on this point. Greg was one of the popular boys. From our distant vantage point, he appeared to be relatively attractive and stylish, with a sour personality.

"So you think Greg is cute because you love your dog and your dog is cute," said Leah.

"Yes. Greg reminds me of my dog, which I mean in a nice way."

But when eighth grade rolled around a year later, suddenly the boys, even without breasts, long hair, or colorful clothes, took on their own special sort of appeal. The girls were still more interesting to look at, but the boys had the consummate advantage of being mysterious and, if they were nerdy and Jewish, just a little nervous when they spoke to me.