The Los Angeles Times recently covered an EdBuild report about the California State Lottery, which is presented to the public as a means of generating funding for public education. What the program actually amounts to, however, after all the costs and winnings are siphoned away, is a transfer of $449 million out of the state's poorest communities and into schools in better-off areas. 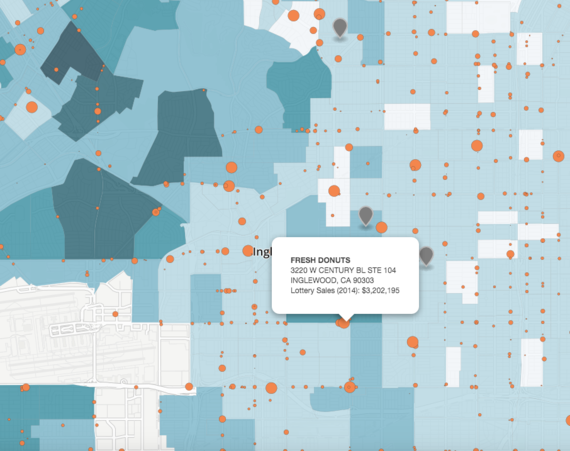 Check out our report to explore all of our visualizations and data, including the exploratory map of every lottery retailer's annual sales and select neighborhood schools throughout the state.

To our knowledge, this is a study that makes accessible one of the largest data sets on the lottery and schools to date, and it was important for two reasons. First, this isn't just a California problem. Lotteries are government programs that exist to generate public revenue, and in 35 states, their stated purpose is supporting public schools-- across the country, they prove to be both inefficient and dramatically regressive. Lotteries in these states raise $54 billion, largely from low-income communities, of which only $15 billion is returned to schools.

But the second and more significant reason that this study deserves attention is that the lottery, while it may make up a small portion of education funds, is just one example of the unfair and inequitable ways that America funds its schools. Certainly, it doesn't seem just that West Compton is only getting $164 per student back from the lottery when the neighborhood spends $11,650 per student on lottery tickets. Similarly, it isn't fair that, on the other side of the country, the city of East Hartford, Connecticut is taxing itself at a rate four times higher than the much more affluent town of Greenwich to pay for schools, simply because school systems rely heavily on property taxes, and East Hartford's property is worth so much less. Similarly, states that require school districts to cover a minimum share of student costs- regardless their ability to pay- like Rhode Island, New Hampshire and Iowa, also perpetuate inequity by forcing low-income districts to draw on more limited tax bases to support students with greater needs.

Lotteries are also clearly representative of the entrenched nature of regressive education funding systems in general. This is powerfully illustrated by the whirlwind case of Texas where, in 2013, state representatives who opposed the lottery program as a regressive tax on the poor won a short-lived victory, garnering enough votes to eliminate the it. The roll call was decisive--81 voted to abolish the lottery, while 65 voted to keep it--but lottery defenders argued that the state couldn't afford to lose the $2.2 billion generated by the program (about 5% of the state's nonfederal education revenue in 2012-13), and by that afternoon, the House held another vote and reversed itself. (In a halfhearted gesture, the state instead appointed a commission to evaluate the lottery; the group's report ultimately recommended retaining the program.)

This story demonstrates that even when there is overwhelming agreement that a program sources public money disproportionately from poor communities and is, in fact, bad policy, it can be incredibly hard to get rid of. As public education becomes reliant on a revenue source, it becomes entrenched, and any effort to eliminate it must either risk leaving schools in the red or must find more progressive sources of funding.

Across the country we see examples, from the lottery to property and sales tax schemes, that rely on low-wealth communities putting in more effort--that is, investing a higher proportion of their disposable incomes--to fund their schools than their affluent neighbors do. In a country that leans so heavily on these revenue streams to support education, it will be a hard, political slog to create school finance systems that promote real equity. But that doesn't mean we shouldn't be talking about it- in fact, we should raise our voices louder.

Our states should be funding schools in a manner that balances the scales for students and communities with significant economic needs. However, when funds are raised disproportionately from the lowest-income areas, it places an extra weight on poor communities. And when funds aren't distributed back to the schools in a way that recognizes and responds to the needs of students, all hope of balance is lost.