For some time now, Betty Who has been one of the most exciting rising stars in the pop world. She's creating the kind of easy and easy to love hits that get stuck in your head and literally never leave. She is making the music that even those who outsell her ten to one should be making, if they were smart.

Betty got her big break when a video featuring her debut single "Somebody Loves You" went viral about a year and a half ago. The clip featured a man being proposed to by his boyfriend in an over-the-top flashmob-style extravaganza in a Home Depot that warmed millions of people's hearts and even got the couple featured on Ellen.

Since then, she's been releasing music and touring non-stop, making the most of one bright moment. She just recently released her debut full-length album Take Me When You Go, which is easily one of the most fun collections of pop to come out this year. She chatted with me just recently after coming back to New York City to play a party celebrating 50 years of the Ford Mustang brand. 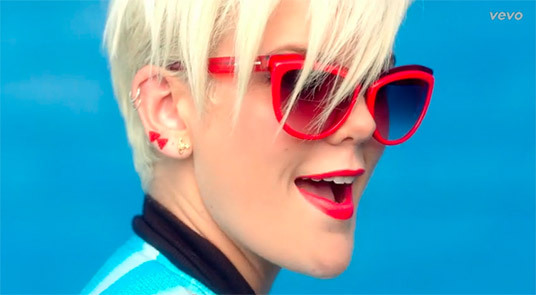 Congrats on the album! It's so good!

Tell me how you feel now that its out.

To be honest, it's a weird thing. It's like now that it's out, what am I supposed to do? It's a weird feeling. I can't sleep at night. I'm so happy that now I get to sing the songs and that people are psyched about it. The first week of tour, it had just come out, and while a bunch of diehards had learned all the words, everyone else was like "Well I like it, but I can't sing along."
Now at shows, we'll start playing "Just Like Me" and everybody gets excited. It feels so nice to have people develop relationships with the song because I've been listening to them for the last year, driving myself insane. I'm really, really excited. I've been loving touring, but we've been playing the same set for over a year now, so it's nice to have new music to play. I can't even tell you.

You toured, you did another tour, and then you announced a third tour because the album was out. Aren't you exhausted?

Always. You keep going and you keep moving, and the second you stop is when you get really tired. The shows have been really awesome. We've played some cities that we've never hit before, which can be tough because the first time you go there you might not have a fan base. The best show we've had so far on this tour is Minneapolis. They turned down for nothing! They were rowdy! They sold out the place. It was so much fun.

Tell me about the past year and a half. To go from having a video going viral to now doing everything you're doing, what's it like?

It is a very fast rise for sure, but to be honest, I think that's how it happens nowadays because of the internet. You're nobody for as long as you need to be nobody, and then the second you're somebody everyone thinks that happened so quickly. I've been quietly recording for a couple of years, but basically once I released my first EP it's all been growing since then. That was in May of last year, so it's literally only been about a year and a half. I can't believe it. So much has changed. To quote Taylor Swift, "Everything Has Changed".
I feel like a different person, but at the same time I still go home and watch House reruns and eat in my bed. I order Thai food and watch Law and Order: SVU.

Which you can't really do, because once you watch one and you get sucked into watching twelve.

The other day we were in DC, and I got the green room of the venue. I turn on the TV, wondering what's playing on USA , and of course it's an SVU marathon. For hours before the show began I was supposed to be rehearsing and getting my makeup done, but instead I watched it. People had to help me change my clothes and get ready while I watched it.

What are you listening to now that we can say that he said listen to?

Apart from Bleachers? I love Jhene Aiko a lot. Like a lot. The 1975 record. I feel the same way about that as I do about the Bleachers record. They're both real albums. I'm also revisiting my Bob Dylan phase, cus I had a big phase during high school, so I'm going back. The Kerouac in me is feeling it and understanding it now.