To say that Yoko Ono's Voice Piece for Soprano is the most visible artwork in MoMA's recent reinstallation of its contemporary art galleries is both unimpeachably accurate and totally wrong. Wrong in the sense that the piece is not visible at all; right in the sense that you can't possibly miss it. Voice Piece for Soprano is a participatory artwork. Museum visitors are invited to take a microphone in the museum's atrium and follow Ono's instructions, posted a wall, to "Scream. 1. against the wind; 2. against the wall; 3. against the sky." The resulting screams are amplified throughout the galleries.

As zeitgeisty as the piece seems (there is much to scream about these days, from the oil spill on down to Tea Party antics), Ono created it back in 1961. In the late 1950s, she and her then-husband, Japanese experimental musician Ichiyanagi Toshi, became part of the constellation of creative types around avant-garde musician John Cage, and Ono began experimenting with "instruction works" or "event scores." She published more than 150 of them, including Voice Piece for Soprano, in her 1964 artist's book Grapefruit.

Voice Piece isn't the only artwork of Ono's on view at MoMA right now. The reinstallation's organizers -- MoMA associate director, Kathy Halbreich, and curator Christophe Cherix -- have also included Whisper Piece, a series of messages Ono has scribbled on the museum's walls, and Wish Piece, which Ono has been creating in various versions since 1996, and which invites museum visitors to write their wishes on a piece of paper and place these on a tree in the sculpture garden. In fact, the presence of Ono's work in the show turns out to be one of its highlights -- so visible is she in New York as John Lennon's widow and onetime musical collaborator that it is sometimes easy to forget that her career as a conceptual artist in her own right both pre- and post-dated her marriage to the former Beatle. Ono spoke with Sarah Douglas about protest songs, the power of wishing, and how a whisper can sometimes be a scream -- and vice versa.

For more information about the exhibition, visit the original Q&A with Yoko Ono on ARTINFO. 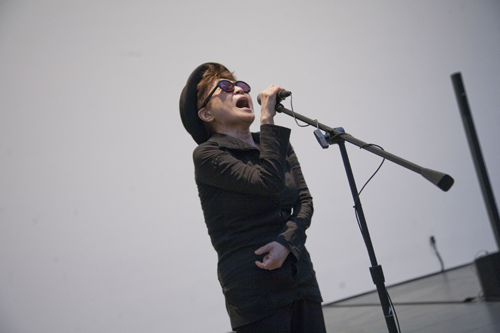 When I went to MoMA a couple of weeks ago for the opening of the reinstallation of the contemporary art galleries, I was taken aback by all these screams echoing through the galleries, and realized it was museum visitors taking the microphone for your Voice Piece for Soprano. I don't think MoMA has ever done anything quite like this before. The effect is dramatic.

It's pretty radical, don't you think?

Absolutely. The instructions you give for the piece are: "Scream. 1. against the wind; 2. against the wall; 3. against the sky." What was your inspiration for this, back in 1961? Wasn't that right around the time you met George Maciunas and became part of the Fluxus group?

I met George Maciunas after I started doing things like this. The inspiration was that I was feeling very rebellious as a woman. The wind, the wall, the sky didn't represent men, but they were situations in life that you have to scream against.

As a form of resistance?

That's exactly what I thought of women doing. If they don't do it, they hold back their emotions and become ill. It's very healthy to scream.

So these could be screams in protest?

Yes. It's a protest song.

That fits nicely with the theme of the new reinstallation at MoMA: current events from the past 40 years, and how they've shaped artists' works. What's it like to see Voice Piece for Soprano in this context?

There are so many instructions in [my book] Grapefruit and I didn't remember this one very well. Then, five or six years ago, I wanted to do a piece outdoors at a museum in Europe. I was going through Grapefruit, and I thought, Voice Piece for Soprano will do. I sent it to them, and it seemed like it was a very successful event. So I started to think, this is a big one. It could be paired with my Cut Piece, [a piece first performed in 1964, in which audience members took turns using a pair of scissors to gradually cut off all of Ono's clothes] in terms of protest and rebelliousness. I thought, "Wow, this is great!" but then I moved on to do other things. Then, MoMA said they wanted to do this one, and I said, "Oh, really?" Because I always thought MoMA was very quiet.

I feel very guilty about that, in a way. But I'm not the one who chose it. I just don't want to give any trouble to anybody, comically. I suppose this is okay!

Well, then again, its effect isn't really up to you, is it? It depends on the reaction of the audience. Cut Piece, which you just mentioned, is the same sort of situation. You've talked about how that piece has been very different depending on where you've performed it. I remember reading that the audience in Japan was shy, whereas in London people became very avid and almost violent about cutting your clothes off. With Voice Piece for Soprano at MoMA -- as far as I can tell, New Yorkers really like to scream.

It might tone down a bit. Initially people really want to scream but then they might start to want to make it into a more musical kind of expression. I don't know which way it will go.

It's interesting that one of your pieces at MoMA involves screaming, and another is called Whisper Piece. How do you think they relate to each other?

You said before that screaming is healthy. I can't help but think of Arthur Janov's primal scream therapy, which you and John Lennon became interested in in the 1970s.

Janov sent his book to us when we were living in England. John looked at it and said, "Primal scream? That's you!" We got so many books, but this one, because the title said "Primal Scream," we thought there was a connection between my work and it, so John read it. If anything, primal therapy was influenced by me. I'm pretty humble about things. I don't like to say, "They came after me!" But I also realize that by being so humble I'm doing a disfavor to women in society. So I do want to say what I did.

But it's also interesting that art sometimes influences the development of non-art things, like therapeutic techniques, or science.

Where else in your work do you see that kind of relationship?

Well, like the Wish Piece. Just to wish for something -- and you don't even have to write it down and put it on the tree or anything, but it's stronger when you do that. Then your wish and other people's wishes merge in one tree -- that, too, is very scientific, actually.

Really? In what sense?

The vibration of wishing is going to be there. It's no longer something that just came into your head and went away. You have stated it. And then you allow your statement to be on the tree -- which is a kind of exposure -- along with other wishes. And that becomes extremely strong. And then they are sent to the Imagine Peace tower in Iceland [a memorial to John Lennon inaugurated in 2007, where over 500,000 wishes from the Wish Trees have already been gathered].

Speaking of voices coming together, Voice Piece for Soprano has been appropriated at least once. On the band Sonic Youth's 1999 album SYR4: Goodbye to the 20th Century, it's performed by band leaders Kim Gordon and Thurston Moore's five year old daughter. What did you think of that?

The way I see it, I made the initial movement, and then it went everywhere, and that's very beautiful. I'm very happy that this creates some kind of movement.

You performed the piece again yourself at the MoMA opening a few weeks ago. What was that like for you? Was it just as cathartic as it was the first time you did it?

Definitely. I have a lot of emotion inside of me. When I saw the microphone, I just felt like doing it. I think that's very true of me in general. When I hear music, my body starts to move, and I'm dancing. Between a dance and a scream: well, that's me.

For more information about the exhibition, visit the original Q&A with Yoko Ono on ARTINFO.

Like what you see? Visit ARTINFO for arts and culture news, the latest on the art market, emerging artists, auctions, galleries, museums, and more.