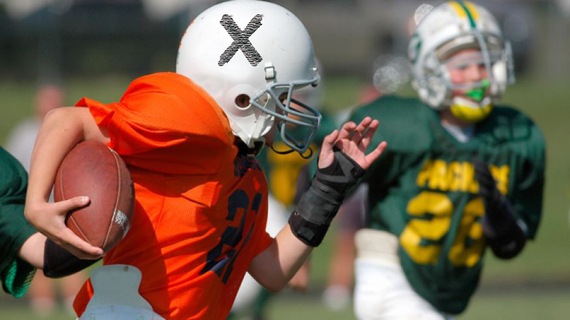 Ben's mother had attempted to put him on a diet, at age 9. It seemed like the reasonable thing to do. It seemed like it would be easier to change her son than all of society. And the truth is Ben didn't like being a fat kid. But on a diet, Ben felt punished and betrayed. Other kids got to eat the good stuff, why not he? He would scream at his mother, "you hate me, you're so mean to me, you don't want me to have anything." Regardless of intention, she became the bad guy. They would fight. Their relationship suffered and they were both miserable. "They come to us crying at first because they're fat, and then we try to help them and they're crying that we hate them. It's a no-win situation for parents, I can tell you that." Also, Ben didn't lose any weight.

The question of whether to give up or keep going was answered, not by bullying children or even their own desires. It was answered by desperation and the city in which they lived. By circumstances that truly left Ben's mother without the option to do nothing. There is a point where the unfortunate becomes the absurd, and Ben was kicked over that goal line. Touchdown. Spike! It was because of football.

Ben loves football. He lives for football. And as soon as he could, he joined the football team. By age nine he was a member of the city run league. In football, being a big dude is not necessarily a bad thing. You won't be a quarterback, but you certainly can have an important role throwing your weight around.

"The really small kids are quarterbacks, runner, or catchers. The fat kids were on the line. I was an offensive kid, so I would usually just lay on my guy and he'd go down. I did play defense a little bit and it was harder because I was slower." The problem for Ben was that, even in tackle football, permission to full-on-pummel doesn't begin until high school. At nine, and for the next five or so years, the player's weight has an enormous impact on not only the position they play, but whether they can play at all.

That is not uncommon. It is not uncommon that the boys, like Ben, have to be weighed before each game. It is not uncommon that they are told not to eat before weigh-in, have to strip down to their skivvies, and have their weight monitored by their own coach and the other team. "They have one weighing session where all the kids go at the beginning of the season, and if you are close or over the cut-off you have to keep weighing. You have to go into this trailer and strip down to you underwear as a fat kid. They weigh before each game and sometimes during some practices - two practices before the game just so they know if you're safe or you need to work." For better or worse, this is not uncommon in competitive sports.

It is also not uncommon that the kids who have not made weight are treated very differently. For instance, during practice instead of learning plays and practicing the game, they run. They run and run. They run until they can't run anymore, and then they run farther. Although Ben had to do this, he certainly wasn't the first. Ask any fat kid football player (or grown man who was a fat kid football player) if they ran during practice instead of actually practicing, and chances are you will find it's a time-honored tradition. They suck it up. That's football.

Mind you, this was happening long before the "childhood obesity crisis" existed. The running is not for health, it has one sole purpose: Making weight at the next game. Perhaps it has a second purpose, but not one that gets printed in the newsletter. That would be: Punishment for not making weight at the last game. Running during practice if you didn't make weight is a time-honored tradition, one that has been hated for as long as there have been fat boys running. But they suck it up. That's football.

What may or may not be historical is that the boys who don't make weight before a game can only play for part of the game -- in this league, three plays in each half. They get benched the remainder. There are theoretically rational reasons for this. For instance, if a small boy is up against a big boy, the small boy might get hurt. Fair enough. But then why three plays? It's safe for three, but not for ten? Is three a magic number or are they randomly playing the odds? Or perhaps they are concerned for the large boy's welfare, an entire game could be too strenuous for a large boy. Except that has nothing to do with it. How would they explain all the running? Plus the boys have all been medically cleared. And, well, no one outside this sentence has ever considered that notion. Besides, Ben wasn't too tired to continue, he was climbing out of his pads to get on the field.

So, boys who don't make weight play for only a portion of the game. Perhaps everywhere, but certainly in Ben's league. However, at least in Ben's league, and it seems most everywhere else as well, there is no well-planned grand scheme for when the big boys can play and when they are benched. They go in for a certain number of plays; the coach determines which. There is no consulting with the opposing team to match up like-sized boys, so that no one gets hurt -- in fact, probably the opposite is true -- probably, using bigger boys against smaller ones is a tactic. Probably it's time to throw in the fat kid when the puny boy on the other team plays. This is still tackle football. And the goal is still to win.

At any rate, as is the rule, Ben played a limited amount of time per game, as determined by the league, when his coach said so. For the rest of the time he watched. On Ben's team, there were usually about four boys in the same boat in any given season. If a boy was too big, he got sent up to Junior Varsity or Varsity with the older boys. But that wasn't a bonus. He wouldn't have the skills of those older children and would warm the bench permanently.

While not playing was frustrating, infuriating was being given no good explanation for the allotted play time. They asked. Of course they asked. Either no one knew, or no one was telling. Perhaps a little of both. Also not uncommon. Just ask any fat kid who plays, or played, football. "It didn't feel really good, and I would feel bad about myself. Sometimes I would get angry. I kind of had it inside, I never really said anything. I was angry inside. I couldn't do anything about it."

Though most of this is not uncommon, there was an unusual aspect to the way Ben's city league dealt with the fat kids. These boys had a name - they were called the "X Men." Why they were originally dubbed the X Men is not clear, it may simply have been practical. The X Men, you see, were branded with a big "X" on their helmets. All the X Men had the letter X embossed in tape, right smack on their heads, so everyone watching -- the coaches, the players, the people in the stands -- knew who the X Men were. They had a scarlet, or at least a duct tape, letter. Certainly that made it easier for the X Men to be identified, but football had already addressed the concept of identification with names and numbers on the uniforms. So the necessity of the X on the head of a fat boy -- who was clearly fat because his body was shaped that way, and even if somehow he magically didn't appear fat he had his name and number on his jersey -- served no actual functional purpose. Unless of course the purpose was one excluded from the rule book: Humiliation.

Edited excerpt from the book "Fat Kids: Truth and Consequences" by Rebecca Jane Weinstein. See more at FatKidsTheBook.com and "See Inside."