It's New Year's Day today in Sri Lanka. The real New Year's for both Buddhists and Hindus on this island is determined by the lunar calendar and will come in April. But if today is not as big as the "real" new year it's big enough and good enough to be celebrated here anyway. The Sinhalese, the majority on the island, mark the day by eating milk rice (kiribath) at home and at work. Our friends took some to the local police station down the street. Many go to work today only to wish each other Happy New Year and to eat milk rice together before calling it a day. The young women at the bank this morning were counting out money in their best saris as Fox News on TV did their yearly countdown to the New Year from Times Square. At least in one respect we are ahead of the U.S. in South Asia, having stumbled into the New Year a good 12 hours ahead of New York that looked on the TV screens to be chocked by winter. 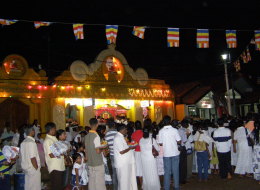 We are fourteen hours into the New Year as I write this. I've been thinking a lot recently about what the future holds for this country. On the one hand, there is something to be grateful for: this is the first new years in 26 years in which this country has not been enmeshed in a civil war. On May 19, 2009 the Sri Lankan military defeated the Tamil Tigers or LTTE after a 26 year-long blood bath that left the economic and moral fabric of this tiny island in shatters. But things are rarely so simple with military victories. They are only one part of the peace that needs to be won in this country. I lived here and wrote my travel memoir of this island "Not Quite Paradise: An American Sojourn in Sri Lanka" (Beacon Press, 2009) against the backdrop of this war and the tsunami. Back here for a month now I see a country that is neither at war nor at peace. Military security checkpoints line the streets of Colombo and elsewhere. Travel, ironically, seemed easier in war time. Travel restrictions earlier imposed for everyone have now been lifted for Sri Lankans but are still in effect for foreigners. The rules change almost daily.

Several hundred thousand civilians still languish in IDP camps in the north set up after the war by the government. Most of these people in the final bloody weeks of the war got caught between the two sides and were used as human shields by both. It has taken since May to resettle them. They are still not resettled. Many remain in these camps because there is simply no place for them to go; others have been separated from family members; some suspected of being LTTE cadres have been segregated out and placed in other camps. For all the jubilation in the papers, the full page ads, the larger than life political posters something still hangs heavy in the air here. The work of winning the peace still has far to go. Some say that the government has spent too long riding the crest of victory and hasn't attended to the real job of addressing the Tamil grievances that led to this war in the first place. And then there is the non trivial issue of the economy. Some newspapers report a boom. Paddy farmers see it differently. 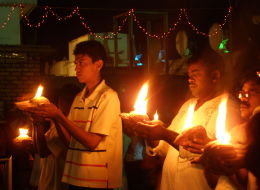 One thing is certain: there is a rice shortage over here. The government claims it is due to the drought. Paddy farmers have a different take on it. They are suffering under the artificial prices that have been imposed on the sale of rice making it possible for everyone to afford the mainstay of the Sri Lankan diet. But the farmers complain that they aren't making enough money off the sale to be able to support themselves and buy the fertilizers they need to grow their crops. Depending on who you talk to tourism has either come back strong or is stagnating. Despite large scale advertising by the tourist board tourism has failed too bounce back less because of the situation here than because of the recession elsewhere.

Suba aluth avuruddhak wewa, the Sinhalese say to one another welcoming in the New Year. Whether 2010 brings the longed for peace and prosperity is for some in the hands of Allah or Buddha. But for others it is very much in the hands of the government to win this peace in the aftermath of war.