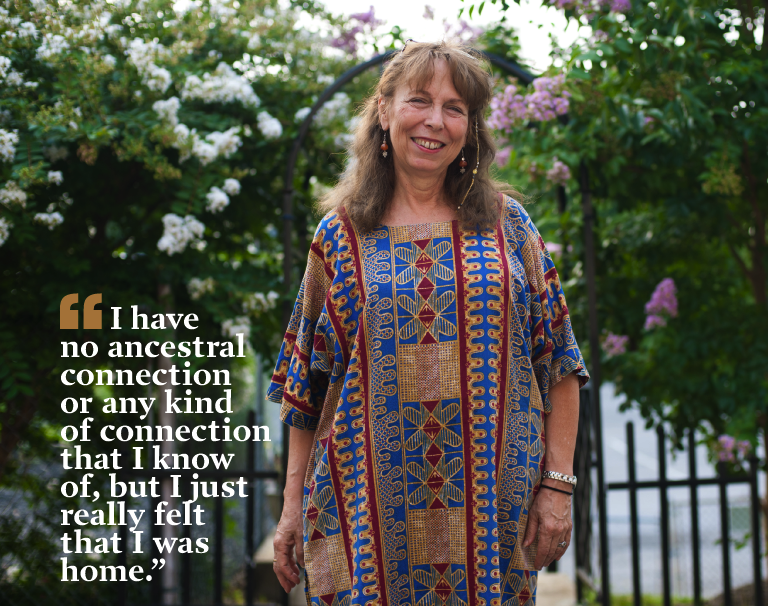 The kids call her Auntie Bev, though they're not related. She's not from the same country or even from the same continent. Her religion is different, her skin, too. But even before Auntie Bev -- Beverly Berndt to most people -- met anyone upon arriving in the Republic of the Gambia in West Africa, she says she felt as if she were home.

Berndt, a 61-year-old mother of four, is a sixth-grade teacher at New Hope Academy, a multi-denominational school founded by Unificationists in Landover Hills, MD. In 1999, Berndt went to Gambia for missionary work through her church, a trip that spawned more than a decade of dedication to the youth of Gambia, providing scholarships, summer program activities and fostering lifelong relationships.

“The daily earnestness, sincerity, diligence and commitment of especially the youth leadership has been almost unbelievable,” Berndt says.

When Berndt was a teenager, she was moved by the actions of Nobel Peace Prize recipient Albert Schweitzer, who was dedicated to providing medical services to the people of Gabon on the west coast of Africa. But even more rousing for Berndt were the teachings of Sun Myung Moon, the leader of the Unification Church who passed away on Sept. 3. Berndt heard his preaching in 1970, and even took a leave of absence from Northwestern University for further study of his teachings.

“I had many questions about the purpose of my life,” Berndt says. “I visited other churches, a synagogue and had just about come to believe that maybe there just were no answers, and I should just do the best I could do as an individual to help others. But Dr. Moon’s teaching really answered my questions to the point that my very soul felt satisfied.”

And when her husband signed up for missionary work in 1998 through the Unification Church and received the Gambia, Berndt followed suit for her own trip in 1999.

THE REPUBLIC OF GAMBIA

“I had felt like I’ve been there before. I have no ancestral connection or any kind of connection that I know of, but I just really felt that I was home,” says the Bowie, M.D. resident, describing her “uncanny” first impression of Gambia.

Berndt, New Hope Academy and many other organizations such as The Women’s Federation for Peace, work together to raise money for scholarships for children in Gambia to continue their education. The government only subsidizes education until the sixth grade, and after that, the cost of schooling is about $100 per year, an amount most Gambians cannot pay.

In addition to raising funds for scholarships, Berndt travels to Gambia to continue her summer program every year, which consists of service projects and community discussions about issues such as AIDS prevention. She usually gives the students in her program a couple of dollars a week as a stipend. Berndt recalls the year she had allotted for exactly 20 students to help her aid the community when six more approached her hoping to join the program. It was clear the money she had set aside would not be enough, but that did not deter them.

“They all agreed to stand on the program even though I couldn’t give them the stipend anymore. Even now when I think about it tears come to my eyes,” she says, her voice wavering.

Her program has grown since those early years. In 2007, after seeing the impact her then-teenage daughters had on the students when the girls would join her on her trip, she began bringing groups of American youths to help with her initiative, now called Service for Peace Side by Side. Including the service projects — such as filling potholes in village roads, building towers on a mosque and cleaning up the villages — the students partake in exercises such as interfaith dialogues to strengthen their characters and relationships with each other.

“What I’ve learned is that the point is not just doing the projects,” she says. “I feel the most impact is the relationships. The key point was that they were meeting each other. They were becoming close friends, like ambassadors for peace.”

One of the Gambian students Berndt has worked with for years had the chance to exercise his own ambassadorial skills in the U.S. when she sponsored him and took him back to live with her family in Maryland. Raised by his older brother after the death of his parents, Musa Jadama, now 21, attended high school for three years at New Hope Academy on a scholarship. He is now in New York for a yearlong leadership program called Generation Peace Academy.

“He has this incredible smile that will win everybody’s heart,” she says. “He’s like a son to me.”

Last February, after noticing Berndt featured on The Huffington Post’s Greatest Person of the Day, the Supreme Master Ching Hai International Association awarded Berndt the Shining World Compassion award and a $10,000 check to go toward further projects in her service-learning program. Supreme Master Ching Hai, head of the Taiwan-based association, is a spiritual leader and businesswoman who funds the award with money through her own ventures.

Thanks to the prize money, Berndt has provided funding for a new well in a village with no healthy water supply, helped finish building a mosque that serves as a community center, and set aside money for scholarships and future community service projects.

When asked for a particular event during her time in Gambia that resonated with her, Berndt was silent for some time. She later explained that it was “almost impossible to narrow down to one or 100 events because it really is the daily words and actions of the people there” that have collectively left an impression on her.