Against all odds, the life of a 9lb Chihuahua-mix dog called Anastasia changed dramatically, from living on the streets of LA with a homeless girl, to a Beverly Hills mansion. When I relayed the story of Anastasia to a friend she said, "It's the doggie version of Pretty Woman!" 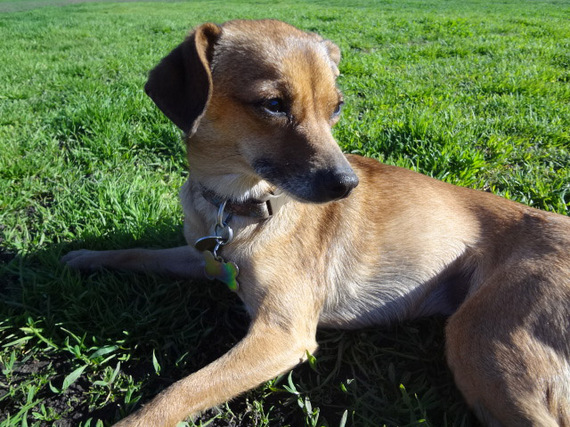 Why is this remarkable or even news? Because it's a story that so few companion animals get to have, and especially a human-aggressive, two-a-penny breed such as a mongrel Chihuahua. Anastasia was not only stranger aggressive but also had a pretty deep-seated hatred of men. This, we surmised, was due to all of the abuse she had endured at the hands of drug and alcohol-addled homeless men during her two years living on the streets of LA.

I first met Anastasia as a puppy at the Occupy LA camp. A small group of local activists had formed to offer free spay/neuter, vaccinations and medical treatment for any companion animals. Anastasia, along with another dog JD, belonged to a homeless girl, Mary. I just happened to be available one day to take Anastasia and JD to the vets to get spayed and neutered. That night the Occupy camp was raided. Mary called me panicked at 1 a.m. begging me to pick up the dogs who were vulnerable from surgery, and were still wearing their "cones of shame." I did. Mary was arrested, and I returned the dogs to her upon her release.

Mary then acquired a pit bull, Melody from some fighting/breeding ring. Sadly, JD was killed in a horrible accident during some nefarious mid-might drama. Over the next two years, I helped with veterinarian care until Mary adopted a blind Maltipoo out of a shelter, and we argued when she refused to give her up to a rescue. All three dogs, Mary and her new boyfriend, a homeless drug addict, now lived in a tent under a Culver City underpass. I didn't hear from them for about 10 months.

The next call I got from Mary she said the new boyfriend had abandoned her, pregnant, and she was at home with her mother. Her mum was hospitalized with a brain tumor, and she could no longer care for Melody; can we come get her? Just the kind of Christmas present I enjoy. Picking up a pit bull, who now had behavioral issues because of life on the streets, just before Christmas, where every kennel was fully booked, and every person I knew was away for the holidays -- but a friend and I did. Getting a home for Melody was a torturous journey, which has hopefully also ended well.

A few days before the New Year I got another call demanding I come and get Anastasia and Roxy. Patience, is a virtue they say! A few days later, I drove the three hours to Mary's mums house and picked up a filthy, matted Roxy and a dirty, skinny, panicked Anastasia. For the past month, the dogs had lived in a garage with six other crazy Chihuahuas being fed cheap dog food that was barely edible.

The exhausted dogs slept most of the drive back to LA. Roxy was delivered into the wonderful hands of the Maltese Rescue California. After calling every rescue and contact I could find with no luck for Anastasia, a close friend, Muriel, kindly offered her a home for a few nights until I could find a full-time foster. Anastasia got groomed and vaccinated, but during those first few days we also discovered she had acquired aggression issues, and who could blame her? After two years on the streets of LA surrounded by druggies, drunks and people with mental health issues, enduring all weather and facing daily hunger, this tiny vulnerable pup took to defending herself by attacking any strangers that came close, especially men. She loathed men. Muriel introduced Anastasia to a friend who was interested in adopting her. She hated him and attacked him at every opportunity. Another friend visited who was subjected to an intense attack on his ankles and calves.

It wasn't looking good at all, and I was panicking. Exhaustive calls to every public and private rescue resulted in nothing but advice. The general opinion was there were rarely good outcomes for homeless people's animals. Pleas on Facebook had few results. Lots of empathy but no concrete homes or fosters. People who had previously offered to foster didn't return calls. It quickly became apparent there were no options for Anastasia. Muriel and I took it in turns to look after her, I did doggie day-sitting duties, and Muriel took over at night. Despite all of her aggression, Anastasia is an incredible dog; intelligent, loving, (to people she knew, anyways) and easy to care for she quickly stole the hearts of her "aunties." We both went through mental gymnastics trying to work out if either of us could keep her, but it was not possible.

I was feeling overwhelmed and depressed at the zero options. For someone who was supposedly well connected in the animal welfare community of LA, I was surprised that even I couldn't pull any strings. One night, as I attended an event, Anastasia's predicament, along with the millions of other companion animals stuffed into shelters staring at the needle of death suddenly got to me. I broke down crying in front of a friend and animal rescuer, Ellen Lavinthal. She just looked at me and said, "Don't' worry, I'll take her. I've been bitten by pit bulls, I don't care." I was stunned, Ellen herself was going through a difficult time, and this was an act of sheer compassion and generosity.

Although I was thrilled for Anastasia, I was worried that she would again make it hard for everyone by being aggressive. As Ellen is a long-term rescuer, I knew that she would never give up on Anastasia, and she would have a home for life, but I wanted to make it as easy as possible. I decided to do the LA thing, and have a session with an animal communicator to see if we could somehow impart to Anastasia that she no longer had to bite the hand that feeds her.

Whether or not it was the communicator, or Ellen's understanding of traumatized animals, or simply Anastasia, now well fed and feeling more relaxed, but when I took her over to her new home in Beverly Hills, the introduction went better than I could ever have hoped. She was a little shy and clingy but nothing like what she had been with other strangers. Within a few hours, she was settled in the lap of luxury. Anastasia had fallen instantly in love with Ellen's other dog, a Yorkie, and her nonchalant cat. She was following Ellen around the house and getting belly rubs from her daughter. Over the next 24 hours, I received joyful reports of how Anastasia had made herself quite at home, and had even sat on a male friends lap and licked his hand, was eating just fine and all was well in Anastasia's new, utterly different world. She was home. 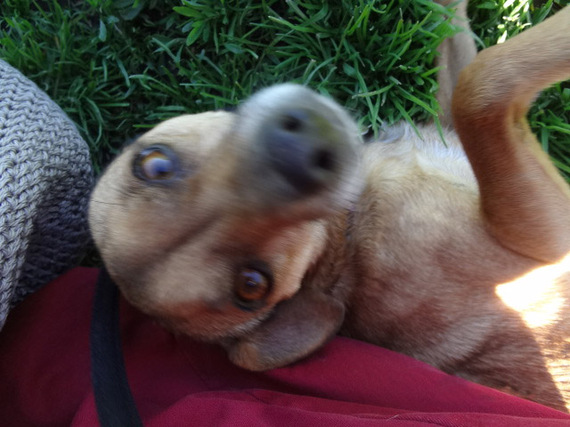 Her aunties meanwhile rejoiced and cried. One little traumatized dog had gone from the streets of LA to the most desirable zip code in the U.S. -- 90210, living with the Beverly Hills' "Angel to Animals." Much like my rescued cats, she seemed to appreciate when people were trying to help and were giving her a second chance.

In 2009, the LA Times reported that California shelters were being inundated with Chihuahuas in what they say was due to the breed's "pop culture" status. It appears that the problem has not improved. A 2012 Animal People survey stated that shelters were receiving more Chihuahuas than ever. Chihuahuas made up 18.5 percent of dogs in shelters, and 93 percent of those were in California.

Chihuahuas aren't the only problem. There is a tsunami of companion animals being abandoned, an issue that needs addressing. The burden of irresponsible breeding and ownership is unfairly placed on groups and individuals that care. It had taken a whole village to rescue just these three dogs. Recently, I was sent a desperate plea to help four male Chihuahuas that had been found abandoned on a hiking trail. These stories are far too numerous. All of the rescues and shelters are overwhelmed, and the answer has to lie in aggressive spay and neuter ordinances, and an enforced ban on backyard breeding with stiff penalties.

The City of Los Angeles introduced a spay/neuter ordinance on February 12, 2008 requiring "all cats and dogs in the City to be spayed or neutered after the age of four months. " There still however appears to be a massive lack of spay and neuter education in communities from the Valley to East LA. I see unaltered animals everywhere.

Many of these animals do have behavioral problems through no fault of their own. I don't know one human who doesn't have similar, and animals have to live with faulty humans without the ability to communicate. We have a long way to go, but everyone can do his or her part to help. Always spay and neuter your animals. Adopt don't shop, and be patient when adopting; animals will take time to adjust and trust in any new home. And NEVER, EVER abandon any animal. Animals are not accessories to our lifestyles to be abandoned at times of inconvenience.