Thanks to executive producer Shawn Ryan, the internet has been treated to the first photo from the set of CBS' "Beverly Hills Cop" pilot featuring star Brandon T. Jackson and the erstwhile Axel Foley himself, Eddie Murphy.

On March 13, Ryan tweeted photos from the production, including duo posing together. 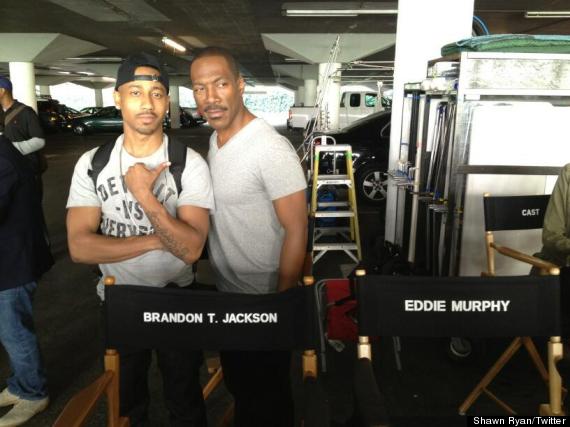 The CBS pilot serves as a sequel to the film franchise and focuses on Aaron Foley (Jackson), a young cop who attempts to police the rich and famous of Beverly Hills while trying to make a name for himself outside of his father's (Murphy) legacy.

Should the pilot be picked up to series, Murphy, who is also credited as a producer, could potentially recur. In addition, Murphy's on-screen partner, Judge Reinhold, will reprise his role as Billy Rosewood for the pilot.

Would you watch a "Beverly Hills Cop" sequel series?

PHOTO GALLERY
TV Shows Based on Movies
Download
Calling all HuffPost superfans!
Sign up for membership to become a founding member and help shape HuffPost's next chapter
Join HuffPost

'Beverly Hills Cop': First Picture Of Eddie Murphy In Shawn Ryan's CBS Sequel (PHOTO)
TV Shows Based on Movies
1 / 24
"Working Girl" (1990)
Yes, it's <em>that</em> Sandra Bullock. The show debuted two years after the movie of the same name hit the big screen, but didn't pick up after the events of the film. "Working Girl" lasted only a few months as a midseason replacement.