One of the most frequent intercultural communication issues that I encounter in my work with European-American teams is centered around the judgement vs. opinion debate. To describe it briefly: Many Europeans often use sarcastic language when they talk about other people's actions or habits, while Americans tend to label that kind of talk as judgmental. In response, Europeans either feel confused and intimidated, either respond back, offended, that they are not judgmental, but just expressing their opinion.

At a Christmas Day brunch I had a chance to observe this issue live, during a discussion around a Mashable article titled, "Minecraft creator beats out Beyonce for $70M Beverly Hills mansion." While looking at the pictures, two of my friends (Francois, who is French, and Dan, who is Romanian) started cracking jokes: Why would anyone pay $70 million for that flat roof house with the architecture of a '70s Orange County shopping center?

According to the real estate agent, it seems that the new owner was very much attracted by the "spectacular panoramic views that sweep from downtown LA to the Pacific Ocean" and "the fact that the house also was completely furnished in such great style." My friends scrolled down to see some samples of the great style:

- 15 bathrooms (although the house has only eight bedrooms) with toilets that cost $5,600 a pop;
- an imitation of James Dean's motorcycle, displayed in front of a huge paper-wall picture of James Dean himself riding the original motorcycle;
- three 90-inche televisions that could screen the LA panoramic views mentioned above;
- and, la piece de resistance, a candy room

Now, this is when the controversy started. There were two other friends at our Christmas Day brunch, Ann and Matt, who didn't seem to find so amusing our jokes about the $70M purchase. As it happens, both of them were born and raised in California.

"I think that it's not OK to judge someone's preferences. We all have different tastes and what works for one might not work for the other," said Ann.

I felt Francois starting to fret in his chair:

"You know what, Ann? Please don't start again that stupid conversation about being judgmental! I prefer to take the risk of being judgmental than to live in denial. Maybe our jokes are mean sometimes, but in this case there is no doubt: This is insanely bad taste!"

"I don't know if you can say that..." Ann continued, but she didn't get to finish her sentence.

"You don't know if you can say that?!! But Ann, this dude paid $70 million for a house with a special room filled with candy dispensers! Plus, he thinks it's cool to watch, from the comfort of his Candy Room, on three huge screens, the views that he could see for real, by simply stepping outside of his house!"

"But wait a second," intervened Matt, "Why is this a problem? The guy is a billionaire, for him $70M is nothing."

"That's what I wanted to say," added Ann, "It is none of your business how he spends his money."

"It's not that it is my business," said Dan, "but really, a candy room? That's how it works, you make a billion so that you can buy even more M&Ms? How about a library room?"

"That's not a reason to judge someone. Not everybody likes books. Maybe this person likes candy. It's actually kind of cute and cool to have your own room full of candy!"

"Not everybody likes books?!?" Francois was looking at us in disbelief.

"Exactly, and there is no reason to judge people for that. We are all different and everyone has the right to do whatever makes them feel good and happy"

It was the moment I felt I had something to say.

"I am not really sure that this is the supreme argument that should guide us in our choices. I spent the beginning of my career working with people who were focused precisely on pursuing what made them feel good and happy: using excessively-prescribed and illegal drugs, working 70 hours a week, exercising until they would get injured, or binging on cubic feet of of candy. All just because it made them feel good. In fact, addiction is based precisely on that: a repetitive behavior that activates the brain circuit that makes one feel good."

"All the more so, these people were doing nothing but following what's prescribed in the Constitution: literally pursuing their happiness!" Francois' sarcasm did not help to ease the tension and eventually we all had to agree to change the subject.

What is your opinion, dear readers? Are Francois and Dan judgmental? And how about Matt and Ann? Is this an intercultural issue between the new and the old world, or it's simply a human issue? And is there any way to make everybody at the brunch table happy?
Please let your voice be heard. 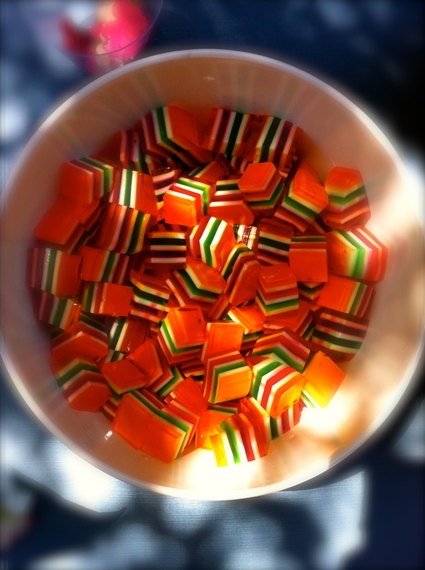