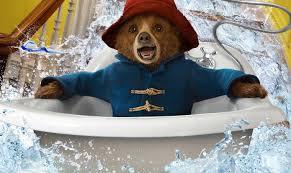 When Paddington, the movie about the beloved English bear, arrives in theaters this weekend we Americans should be afraid . . . very afraid.

While it might seem like this adorable scamp of a talking bear is just here to delight and make fans this side of the pond, I believe his arrival is actually part of a plot, a sinister and incredibly long-in-the-making plot conceived by the Brits shortly after the Revolutionary War.

In the last few decades, while we as a nation were busy creating and then cleaning up the messes of the world, the Brits quietly and quite unassumingly infiltrated our American airwaves and entrenched themselves into our hearts and minds, all in a masterful attempt to regain control of our precious land.

The first wave of their attack brought us their talented actors, like Laurence Olivier, Julie Andrews, Maggie Smith, Ben Kingsley, Colin Firth and Daniel Day-Lewis. Naturally we fell in love with them, partly because of their inherent and overt Englishness. I mean, who can resist that accent?

British actors have landed big-budget action hero roles like Batman (Christian Bale) and Spiderman (Andrew Garfield) and even the leads in quintessential American stories like 12 Years a Slave and Selma (Chiwitel Ejiofor, and David Oyelowo and Carmen Ejogo).

Not content with just starring in our movies and TV shows, the Brits have changed what we watch too. They analyzed what we Americans like to do best - sit on our butts in judgment of others - and then gave us a steady diet of it.

They assaulted us with an endless barrage of reality competition shows like, Dancing With The Stars, American Idol, America's Got Talent, and So You Think You Can Dance. Then they sat back on their British butts and watched while we became solidly and completely hooked, so hooked we're often more interested in the outcomes of these competitions than our own political elections.

A devious by-product of these reality competition shows is that the hosts and judges are mostly British, therefore establishing themselves as authority figures and preparing us for the inevitable return to British rule. Think about it. We had never heard of Simon Cowell, yet suddenly one day he became the ultimate authority on musical talent in America.

Meanwhile, behind-the-scenes, squadrons of British directors and producers came to run these shows, often angering Hollywood workers who say they have taken our jobs. But the anger is usually short-lived because the Brits easily gain our loyalty with their crafty and cunning ways.

They start by using foreign and unfamiliar terms like, "Please," and "Thank you." Then, instead of berating or yelling at the staff and crew like we're used to, they seal the deal with sugary compliments and niceties like, "Brilliant," "Lovely," or even the occasional, "Jolly well done."

But pity the poor American underling put in charge of their tea, for that's when a chink in the Brit's armor is exposed. That's when their natural air of superiority accidentally slips out. "Why can't anyone make a decent cup of bloody tea here?" they'll hiss. Of course they quickly self-correct, lest we become suspicious of their real mission here, "Terribly sorry. It's really quite lovely. Cheers."

Now it's time for us to stand together and fight this foreign threat before they can claim their youngest victims. Our twenty-somethings have long been lost, for they spent their formative years under the spell of Harry Potter. Our teens and tweens are now bedazzled by Harry Styles. But our smallest children remain untarnished, and that's why we need to keep them from Paddington's furry grip.

Sure, "advanced reviews" for Paddington have been overwhelmingly positive, even scoring a 98 on Rotten Tomato. But who wrote these reviews? I wonder, if you woke them in the middle of the night, how would they pronounce "advertisement?"

I urge my fellow patriots to turn off Downton Abbey and set your TVs to the Real Housewives of Orange County instead. Ignore the talents of Eddie and Benedict, and give the Oscar to the clearly more deserving Michael Keaton of Pennsylvania.

And lastly, wholeheartedly reject the adorable Paddington, and cling tightly to the cuddly, lazy American bear of our youth, Winnie the Pooh.

Wait, what's that about Pooh?